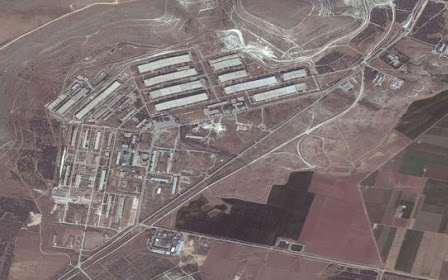 In the latest of its escalated airstrikes, Israel has fired missiles on Assad regime and Iranian positions east of Aleppo city in northern Syria.

Unconfirmed reports said the Israeli attacks also targeted the bases of Iran-supported militia in Deir ez-Zor Province in the east of the country.

The Aleppo strike was near the Scientific Studies and Research Center at al-Safirah. It was unclear if the center was the target, or if Israel was trying to destroy weapons depots.

The facility is reportedly connected to the regime’s chemical weapons program as well as the development of missiles and advanced munitions.

The assault was the sixth attributed to Israel in the past two weeks. In line with its common practice, the Israel Defense Forces issued no comment.

The Assad regime issued a brief statement on the Aleppo strike, but did not mention the attack in the east. There was no statement about casualties, but an official said “verification is underway to evaluate the losses left by the aggression”.

Russia’s Sputnik site, citing a regime official, tried to tie the attack to the US. It claimed that the Israeli aircraft had flown from the al-Tanf region in eastern Syria, the site of an American base.

Since late April, Israel has fired missiles on Iranian and regime bases near Damascus, near Palmyra in central Syria, and in the southwest near the Israeli-occupied Golan Heights. A drone strike on a car near the border with Lebanon reportedly injured several Hezbollah members.

The Assad regime said the explosions were from “human error” as munitions were transported. State news agency SANA said at least 10 people were wounded.

Defense Minister Naftali Bennett stepped up warnings to Tehran in a series of statement. He said on Tuesday:

We have moved from blocking Iran’s entrenchment in Syria to forcing it out of there, and we will not stop.

We will not allow more strategic threats to grow just across our borders without taking action. We will continue to take the fight to the enemy’s territory.

Israeli Prime Minister Benjamin Netanyahu and the military have repeatedly said that they will not tolerate the presence of Iranian-led militia or Hezbollah in southwest Syria near the Israeli-occupied Golan Heights.