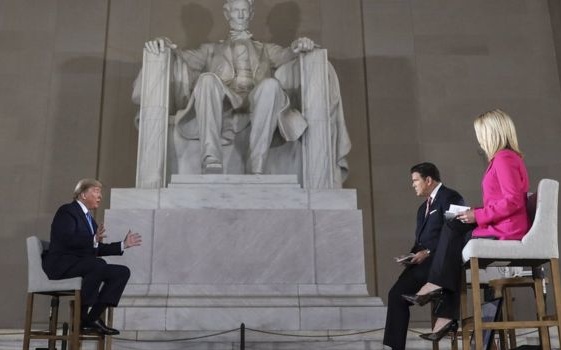 Donald Trump speaks with Fox TV at the Lincoln Memorial, Washington DC, May 3 2020

In his latest lie about the Coronavirus crisis, Donald Trump says he was not told by US intelligence agencies until January 23 about the outbreak.

In a “Town Hall” on pro-Trump Fox TV on Sunday night, Trump also downplayed the information as unimportant:

In fact, Trump received information from intelligence agencies soon after Chinese officials confirmed the outbreak on January 3 to the Center.

But multiple US officials say Trump ignored the intelligence in the President’s Daily Brief from mid-January throughout February.

Health and Human Services Secretary Alex Azar briefed Trump about the threat on January 18, but Trump ignored the warning and changed the subject to vaping.

At the end of January, Azar tried again to brief Trump but was told that he was being “alarmist”.

Trump declared in late February, after the initial outbreak in Washington State and as the virus was moving undetected in areas such as New York, “Within a couple of days, [it] is going to be down to close to zero…It’s like a miracle, it will disappear.”

He told the Conservative Political Action Conference that the virus was no worse than flu,: “The reason [the media] are paying so much attention to it today is that they think this is going to bring down the president.”

And on March 10, the day before the World Health Organization declared a global pandemic, Trump said, “Just stay calm. It will go away.”

EA on talkRADIO: Coronavirus — Trump Protects Himself By Risking Lives of Americans
TrumpWatch, Day 1,178: How Trump Fiddled While Coronavirus Spread

A Town Hall of Disinformation

Trump declared on Sunday that his inaction had saved “millions of lives”.

But he tried to push blame on others such as China and pushed false claims that the Obama Administration had done nothing about illnesses: “We will be AIDS-free within 8 years. We started, 10 years. Should’ve started in the previous administration. They did nothing. It started at my administration.”

Trump continued to assail Democratic Governors such as Washington’s Jay Inslee and Michigan’s Gretchen Whitmer, lying that State leaders had not raised concerns about the Federal Government’s failure to supply medical equipment and provide testing.

Continuing to cover up his ignorance or dismissal of medical advice, Trump falsely claimed that Dr. Anthony Fauci, the White House’s infectious diseases expert, said the Coronavirus was “going to pass, not going to be a big deal”.

Scrambling over his promotion of hydroxylchloroquine as a “wonder cure”, Trump continued to push false information about the anti-malaria drug.

Trials have failed established any palliative effect and instead have highlighted potentially deadly side effects. But Trump minimized the findings and insisted, “There were studies that came out that say it’s very good.”