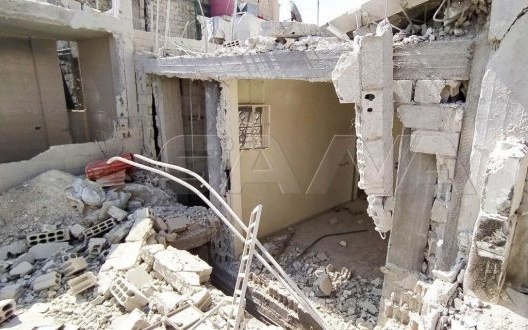 Israeli missiles have struck again near the Syrian capital Damascus.

Unconfirmed reports say at least four Iranian-supported militia and three civilians were killed and four people, including a child, were wounded when Israeli warplanes fired missiles from Lebanese airspace.

Pro-opposition activists said the Iranian base of al-Kiswah, regularly attacked by the Israelis, and two other positions were targeted.

The Assad regime’s news agency SANA said civilian casualties were from shrapnel when the missiles hit homes in the towns of al-Hujaira and al-Adliya.

Photographs on social media showed a building with much of its upper floor damaged, with claims that a man and his wife were killed. Pro-opposition TV station Halab Today said there was ambulance movement in the area for an hour after the strikes.

A regime military official put out the standard statement that most of the missiles were shot down, but admitted that some had caused damage.

But Quneitra Governor Humam Debiyat, touring al-Hujaira, told journalists that a husband and his wife were killed and three people, including a child, were wounded.

Damascus Province Governor Alaa Ibrahim said the attack in al-Hujaira damaged a house belonging to a displaced family, and a woman was killed in al-Adliya.

A military source had announced at dawn that the Syrian Arab Army’s air defense systems intercepted an Israeli missile attack launched by warplanes from over Lebanon, with the defenses shooting down most of the missiles.

A drone strike on a car near the border with Lebanon reportedly injured several Hezbollah members on April 15.

For Iran, Syria is an adventure far from home: 1,000 km from home, from the Golan Heights. For us, it’s life. Iranian soldiers who come to Syria and operate within Syria: Their blood is on their heads. They are risking their lives and paying with their lives. We will not allow the establishment of an advanced Iranian base in Syria.

Israeli Prime Minister Benjamin Netanyahu and the military have repeatedly said that they will not tolerate the presence of Iranian-led militia or Hezbollah in southwest Syria near the Israeli-occupied Golan Heights.