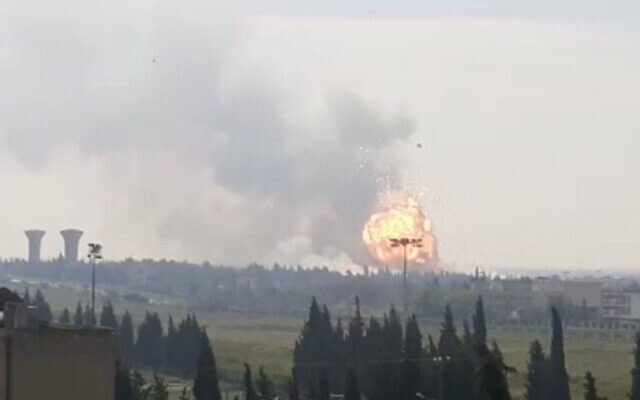 Israeli defense officials claim Iran is withdrawing some of its forces from Syria, after an escalation of Israel’s airstrikes on Assad regime and Iranian positions.

The officials told Israeli outlets on Tuesday that the series of missile attacks, including at least six in the last two weeks, have led to the pullback of Iran-supported militias and closure of bases.

“Syria is paying a growing price for the Iranian presence in its territory, for a war that isn’t [Syria’s]. Iran has turned from an asset to Syria into a burden,” the sources said.

Unconfirmed claims said the Israeli attacks also targeted the bases of Iran-supported militia in Deir ez-Zor Province in the east of the country.

The regime acknowledged no casualties, but reports circulated that 14 Iran-backed militiamen were slain.

Since late April, Israel has fired missiles on Iranian and regime bases near Damascus, near Palmyra in central Syria, and in the southwest near the Israeli-occupied Golan Heights. A drone strike on a car near the border with Lebanon reportedly injured several Hezbollah members.

In the past 10 days, Israel’s Defense Minister Naftali Bennett has issued a series of warnings:

The Israeli officials said on Tuesday that Iran’s transport flights of munitions and personnel have decreased in the past six months, possibly because of Israel’s strikes on airports.

They also cited the effect of the US assassination on January 3 of Maj. Gen. Qassem Soleimani, the commander of the Revolutionary Guards’ Quds Forces.

Soleimani, who oversaw Iranian military operations throughout the Middle East, was central to the Iranian support of the Assad regime since the Syrian uprising began in March 2011. His replacement, Esmail Qa’ani, had little experience in the region, having been involved in Iran’s operations in Afghanistan and Pakistan.

The officials assessed that while Iran will suffer the strikes without a response, there is little prospect of an immediate retaliation.

Iranian State outlets did not respond to the Israeli statements.

Israel has attacked Assad regime, Iranian, and Hezbollah targets throughout Syria’s nine-year conflict. The strikes initially focused on stopping the movement of weapons and preventing an Iranian or Hezbollah province near the Israeli-occupied Golan Heights.

However, since 2017 the missile attacks have expanded to support Prime Minister Benjamin Netanyahu’s demand for Iran’s full military withdrawal from Syria.