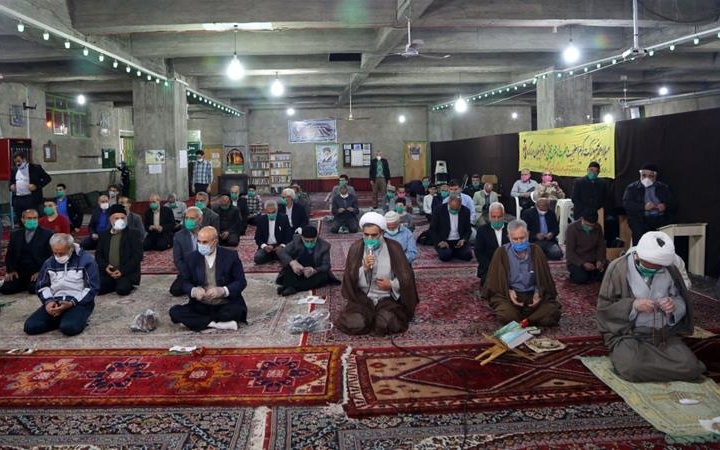 Despite a resurgence in Coronavirus cases, all mosques in Iran were reopened from Tuesday (Fatemeh Bahrami/Anadolu)

Rouhani told officials, academics, and clerics on Tuesday that the Islamic Republic’s supposed achievements had “invalidated the biased judgments against Iran, its establishment, government, and management system”.

He proclaimed that critics now recognize Iran is a “powerful and mighty country”: “Many countries laud such (Iranian) performance.”

The Health Ministry said on Tuesday that another 48 people had died. There are 110,767 confirmed cases, with 2,713 patients in critical conditions

Analysts, medical personnel, and even Iranian officials have said the numbers of deaths and cases are under-reported.

In the initial stage of the outbreak in February, the Supreme Leader and Rouhani dismissed reports as a “Western plot” to depress turnout in Parliamentary elections and undermine Iran’s economy.

Rouhani: “We Must Prepare for Scepticisms”

The Government implemented social distancing measures in March, including the closures of businesses, schools and universities, and mosques.

However, with Iran in economic crisis, Rouhani has loosened the restrictions since April 11. “Low-risk” businesses and mosques have been reopened, although schools are still closed.

Iran’s official cases have resurged from 802 on May 2, their lowest point since March. The Health Ministry announced 1,481 new infections on Tuesday.

The Westerners imagined that the Iranian nation would not withstand the pressures and sanctions for more than a few months, and after the outbreak of the virus, they thought that a country under tough sanctions and with limited financial sources could not endure such problems….

The measures that we witnessed in Iran in the course of the battle with the Coronavirus could disprove many judgments that were being made about the establishment, the government, and people.

He said that while “the Iranian health sector’s performance has been very great in comparison with the other countries”, the Government had ensured “the welfare or provision of services for the disabled, the old people’s homes, and the big factories”.

The President hinted at an ongoing crackdown on dissent from the official line: “We must prepare for the post-Coronavirus era from today. Many scepticisms will be made in the social media and university classes, for which we need to plan to encounter.”

Iranian authorities have detained thousands of people for their posts about the virus.