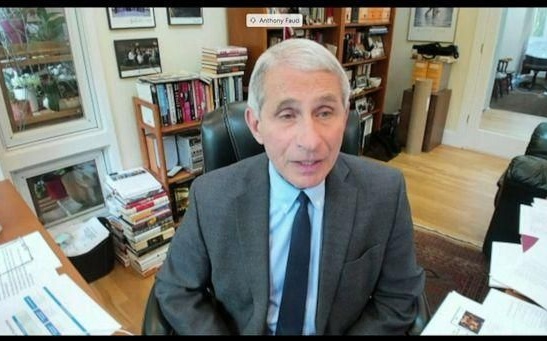 Dr. Anthony Fauci, in self-quarantine, gives testimony to a Senate committee hearing on Coronavirus, May 12, 2020

In a Senate hearing, the US’s top medical officials give a devastating rebuttal of Donald Trump’s declarations about Coronavirus.

The statements on Tuesday came as the US death toll reached 82,387, an increase of about 1,700 in 24 hours. Confirmed cases are nearing 1.4 million.

The Senate committee heard from the White House’s top infectious diseases expert, Dr. Anthony Fauci, and the director of the Centers for Disease Control and Prevention, Dr. Robert Redfield.

They vividly portrayed an Administration which failed to prepare for the outbreak, and they criticized Trump’s current emphasis on “re-opening” the US, ignoring medical advice and risking a resurgence of the virus.

Fauci, director of the National Institute of Allergy and Infectious Diseases, explained that Americans would experience “suffering and death that could be avoided”, and the economy would be further damaged, by the premature lifting of stay-at-home and social distancing measures.

If some areas, cities, states or what-have-you, jump over those various checkpoints and prematurely open up without having the capability of being able to respond effectively and efficiently, my concern is that we will start to see little spikes that might turn into outbreaks.

Fauci, who has been publicly sidelined by Trump for weeks, said the actual death toll is probably much higher than the official figure. He rebuffed Trump’s assertion that the virus will “die out” on its own, and along with two other officials, said neither a vaccine nor guaranteed treatments will be available when schools are scheduled to resume in the autumn.

[An end to the crisis] is just not going to happen. It’s a highly transmissible virus. It is likely there will be virus somewhere on this planet that will likely get back to us.

Senator Patty Murray asked, “So if they don’t go by the guidelines, consequences could be dire?”

Fauci confirmed, “The consequences could be serious.”

When he reiterated to Sen. Elizabeth Warren that the virus was not “under control”, she asssessed, “The time for magical thinking is over, we are running out of time to save lives.”

“We Are Not Out of the Woods”

In sharp contrast to declarations by Trump and his son-in-law Jared Kushner of a “great success story”, the CDC’s Redfield acknowledged the inadequate response in the early stages of the outbreak.

After Sen. Tim Kaine detailed how, unlike the US, South Korea contained the outbreak through testing, tracing, and isolation measures, Redfield said the US lost “the containment edge”.

CDC Director Redfield tells Tim Kaine that because the US moved so slowly, we “lost the containment edge” and had to shift to “mitigation” as the coronavirus swiftly outflanked the nation; it meant shutting down the non-essential economy while we calculated the damage. https://t.co/h9k0c2uo5m

Redfield said the CDC is “working directly with the states’ public health leaders” on an examination of testing capacity, necessary for any responsible lifting of restrictions.

Last week the Trump Administration, at Trump’s direction, blocked the CDC’s recommendations to the states on a how to reopen schools, businesses, and other facilities safely.

“Rapid, extensive, widely available and timely testing is essential,” Redfield said, in an implicit knockback of Trump’s repeated, false declarations that the US has already achieved a world-leading level.

The director emphasized, “We are not out of the woods yet.”

Adm. Brett Giroir, the Assistant Secretary of Health and Human Services, tried to protect Trump by reiterating the misleading declarations — contradicted by Fauci and Redfield — of US supremacy in testing.

I understand that politicians are going to frame data in a way that’s most positive politically, but of course I don’t expect that from admirals.

“But yesterday you celebrated that we had done more tests, and more tests per capita, even, than South Korea, and you ignored the fact that they accomplished theirs at the beginning of the outbreak, while we treaded water during February and March.

And as a result, by March 6, the US had completed just 2,000 tests, whereas South Korea had conducted more than 140,000 tests, so partially as a result of that they have 256 deaths and we have 80,000. I find our testing record is nothing to celebrate whatsoever.

The fact is their [South Korea’s] test numbers are going down, down, down, down now because they don’t have the kind of outbreak we have, ours are going up, up, up as they have to. That’s an important lesson for us as we think about the future.

The Administration has belatedly stepped up the provision of testing kits and material to states. But Gov. Gretchen Whitmer of Michigan, which has the fourth-highest death toll in the US, said deliveries from the Federal Emergency Management Agency are still not sufficient.

“FEMA sent us swabs today. We need more and they are committing to sending us swabs through the end of May at least,” Whitmer said. “But we’re still not in a position to meet every need.”

In a Twitter burst on Tuesday morning, Trump shouted, “Our Testing is the BEST in the World, by FAR!…The American People are WARRIORS!…TRANSITION TO GREATNESS.”

But he said nothing about the day’s developments, including the statements by Fauci and Redfield. Instead, he concentrated retweets to complain about the Trump-Russia investigation.

But the effort was set back on Tuesday when Judge Emmet Sullivan held up the Justice Department’s motion to quash Flynn’s conviction, of lying to the FBI over his conversations with Russian Ambassador Sergey Kislyak.

Sullivan said he will consider “friend of the court” briefs by independent groups and legal experts.