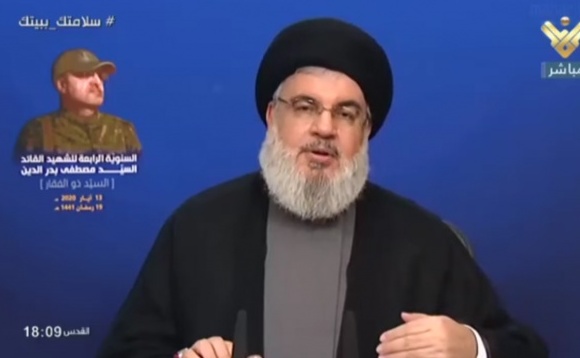 In a speech on Tuesday, the head of the Lebanese organization tried to minimize the current role of Iran and Hezbollah, vital since 2013 to the survival of the Assad regime. He claimed that they were only providing “military advisors and experts” and not troops.

At the same time, he denied that the strikes are pushing either Hezbollah or Iran to retreat from Syria: “There is an imaginary battle that Israel is waging, called ‘not allowing the presence of Iranian military troops in Syria’.”

The Hezbollah leader was speaking on the fourth anniversary of the death of Mustafa Badreddine, the organization’s commander in Syria. He was killed in an explosion near Damascus International Airport.

Nasrallah’s line echoed that of Iran, which has claimed since 2012 that its troops were only in Syria as “advisors”.

Iranian special forces have been in the country since then. The Quds Force, the Revolutionary Guards branch for foreign operations, developed a 50,000-strong militia to prop up a depleted regime military. Iranian commanders oversaw tens of thousands of foreign militiamen, used as frontline “shock” troops as pro-Assad forces tried to regain territory.

Nasrallah’s appearance on a large video screen in Beirut was flanked by posters of Maj. Gen. Qassem Soleimani, the Quds Force commander assassinated by a US drone strike in Iraq on January 3. Members of the crowd held up photos of the general, who led Iran’s military intervention in Syria.

The strikes initially focused on stopping the movement of weapons to Hezbollah, but later expanded to press for Iran’s full military withdrawal from the country.

The strikes have escalated this spring, with at least six attacks in the past three weeks. On May 4, the Israelis reportedly hit munitions depots in northwest Syria near the Scientific Studies and Research Center, connected to the regime’s chemical weapons program as well as the development of missiles.

Israeli defense officials told outlets the next day that Iran is withdrawing some of its troops because of the attacks.

However, on Wednesday the Jerusalem Post claimed from satellite imagery that Iran is building an “advanced underground weapon” base in eastern Syria near the border with Iraq.

In another notable passage, Nasrallah dismissed reports of tension between Iran and Russia over political, economic, and military matters in Syria.

“Iran is not engaged in an influence war with any side, neither with Russia, nor with any other country. Its goal is to prevent Syria’s fall in hands of US and Zionist entity,” he insisted.

Russian State outlets and President Vladimir Putin’s allies have stepped up pressure on Bashar al-Assad with articles criticizing Assad’s unwillingness to compromise for a political resolution.

Moscow is also expressing concern about the Syrian economy, which has lost 75% of its GDP since 2011, with no sign of recovery or significant reconstruction.

Russia’s massive military intervention in September 2015 saved the regime from collapse and enabled it to regain much of Syria. However, Russian interests are competing with the regime and Iran for a return on that investment, through control of Syrian resources.

Nasrallah blithely said that “it is normal that Iran and Russia have different assessments to the situation in Syria”.