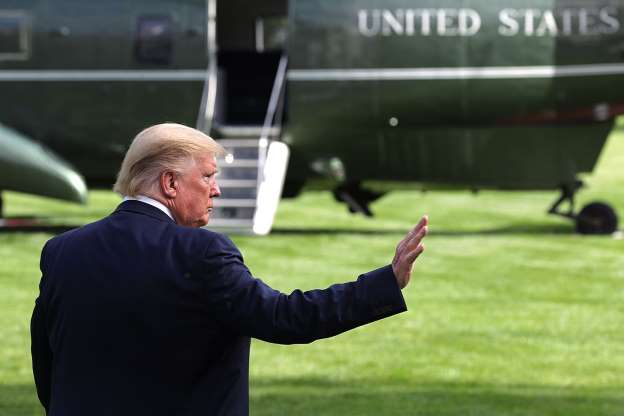 Donald Trump leaves the White House for the Camp David retreat in Maryland, May 1, 2020 (Chip Somodevilla/Getty)

With the US death toll from Coronavirus passing 66,000, Donald Trump and his advisors are spending the weekend at the Camp David retreat in Maryland, looking for the image of economic salvation to ensure Trump’s re-election.

Trump’s repeated declarations that he has masterminded a US economic recovery — which actually had begun in 2009 after the Great Recession and was stronger in the last years of the Obama Administration — have been shredded by the cost of the virus.

More than 30 million Americans have filed for unemployment in the past six weeks. US GDP contracted 4.8% from January to March, even before the escalation of the virus, and is expected to plummet farther this quarter. The stock market, Trump’s barometer for success, is 25% lower than its mid-February peak.

Defying medical advisors, Trump first said the US would “reopen” by Easter, April 12, and then by May 1. Unable to claim “total authority” and overrule State governors, he has encouraged illegal, armed protests against stay-at-home orders.

They are discussing a PR campaign around tax and regulatory proposals, according to “half a dozen senior administration officials and Republicans close to the White House”. It will include a televised “Town Hall” at the Lincoln Memorial on Sunday night and Trump’s visit to a Phoenix, Arizona aerospace plant on Tuesday.

Fauci has been on the podium infrequently during the past month, as his caution against re-opening the US quickly clashed with Trump’s demand to lift restrictions. On Friday, the White House blocked the doctor’s testimony to a House appropriations committee this week.

Trump’s inner circle is concerned by polls that show a fall in support in key swing states, such as Wisconsin, Ohio, and Michigan, ahead of November’s elections. Trump is also suffering a dip with senior citizens, who were instrumental in his 2016 victory over Hillary Clinton.

Jared Kushner’s Wednesday appearance on Trump’s favorite program Fox & Friends backfired, as he was ridiculed for declaring “a great success story” amid more than 60,000 deaths and 1 million confirmed cases.

Trump advisors have also been hoping for a surge this week from a sexual assault allegation against the presumptive Democratic Presidential nominee Joe Biden. However, they have struggled to overcome the double standard of attacking Biden while covering up more than 20 sexual harassment allegations, including accusations of rape, against Trump.

On Saturday, the allegation against Biden appeared to weaken with the revelation that staffer Tara Reade, in a 1993 complaint, only mentioned feeling “uncomfortable” and did not mention a sexual assault.

Even as his inner circle emphasized the economic message, Trump threatened to derail the Camp David meetings with his Twitter bursts on Saturday.

He retweeted jokes and condemnations of Biden. He also repeated his proclamation of “Russia hoax” amid a high-profile defense of Michael Flynn, the former National Security Advisor who pled guilty to lying to the FBI.

He labeled House Speaker Nancy Pelosi as “Crazy Nancy”, said a female journalist had been “thrown off [the TV program] The View like a dog”, and publicized Sunday TV programs on pro-Trump outlets.

Trump even found time to offer support to North Korean leader Kim Jong-un, who reappeared after weeks of rumors that he was seriously ill or dead.

I, for one, am glad to see he is back, and well! https://t.co/mIWVeRMnOJ