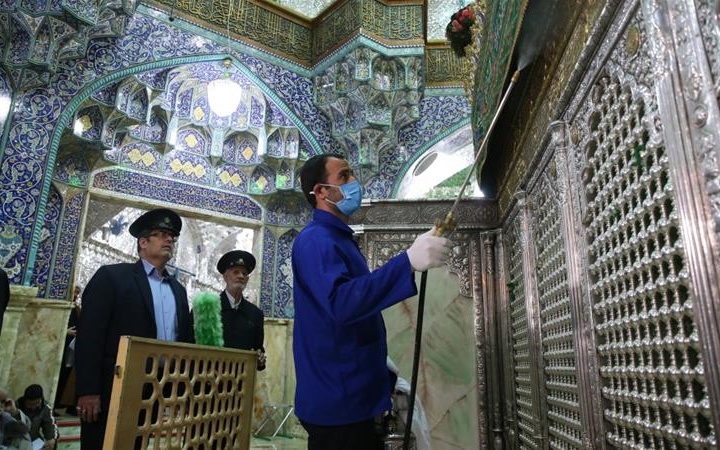 Workers disinfect Qom”s Masumeh shrine in March, before the closure of religious sites because of Coronavirus (Mehdi Marizad/Fars)

Iran’s Rouhani Government has reopened mosques in 132 cities, as it eases restrictions over the Coronavirus outbreak which has officially killed 6,156 people.

President Hassan Rouhani announced on Sunday that the mosques, in “white zone” areas, will be open from Monday.

With crowds of worshipers, mosques and shrines were seen as a central location for the spread of the virus from February. The regime initially refused to close religious sites as it played down the seriousness of the outbreak, but had to do so in March as the death toll mounted.

Amid the start of the holy month of Ramadan last week, the Government faced rising demands for the resumption of religious activities.

In the past three weeks, “low-risk” businesses have been allowed to resume across Iran. The country has been divided into white, yellow, and red zones.

Deputy Health Minister Iraj Harirchi said a decision is still to be made on the reopening of schools.

But Mohammad Mehdi Gouya, director of the Health Ministry’s communicable diseases department, cautioned, “If people do not observe health protocols, the disease will certainly return.”

He noted that, in the most seriously affected cities, only 10% of residents have been infected.

This means that 90% have not yet been infected with the virus. Therefore, we must not think it’s over and leave home and make social visits as we please….There is no other option but to observe proper social distancing.