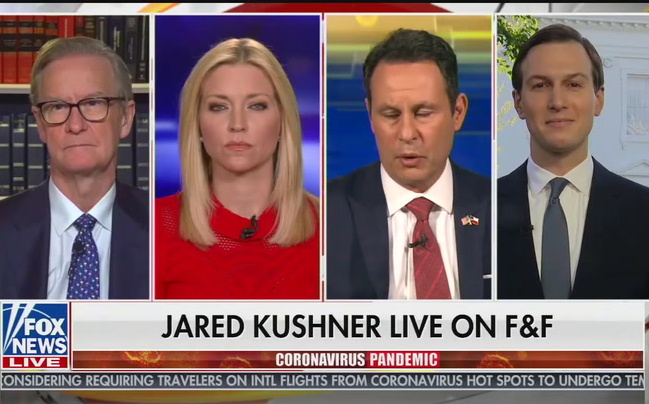 EA’s Scott Lucas chats with BBC West Midlands about Donald Trump’s mishandling and deception over Coronavirus as US cases passed 1,000,000 on Thursday.

Kushner used a Wednesday appearance on the Trump-supporting Fox & Friends to defy the accounts of his father-in-law’s mismanagement and Coronavirus denial, and at the same time echo Trump’s proclamations that all is well.

“The federal government rose to the challenge and this is a great success story and I think that that’s really what needs to be told,” he asserted.

Even the hosts of Fox and Friends, one of Trump’s favorite programs, pushed back. They queried why US Coronavirus test levels remain low, compared to what is needed for containment of the virus and a relaxation of restrications.

Kushner said the question should not be why the testing has taken so long to arrange but “How did we do this so quickly?”

He said, “May will be a transition month….I think you will see by June, a lot of the country should be back to normal, and the hope is that by July the country is really rocking again.”

Kushner reportedly bolstered Trump’s Coronavirus denial as the outbreak spread across the US in January and February. He told his father-in-law that the media was exaggerating the virus in an attempt to undermine his Presidency.

His role has been largely behind the scenes, despite being central at White House meetings. Earlier this month the Administration tried to feature him in a briefing, but the effort backfired when Kushner fumbled questions about the lack of essential medical supplies being provided to states.

Kushner foreshadowed Trump’s latest misinformation on Wednesday afternoon. He told reporters, “So, we reached a million cases, that’s a tremendous amount, and the reason is because of testing, because other countries don’t test. If you don’t test you’re not going to find cases.”

Trump has repeatedly said the US has carried out the most testing in the world. In fact, on a per capita basis, the US is behind many European countries and on a par with Belarus.

He said his son-in-law is “a genius”, as he declared that he saw “the light at the end of the tunnel very strongly”.

Trump blamed others for the virus and renewed his focus on his re-election campaign:

In the not-too-distant future we’re going to have some massive rallies.

“And people will be sitting next to each other. I can’t imagine a rally where you have every fourth seat full. Every six seats are empty for everyone you have full, that wouldn’t look too good.

Trump: This plague should never have happened. It could’ve been stopped but people chose not to stop it pic.twitter.com/hLUEprSS7z