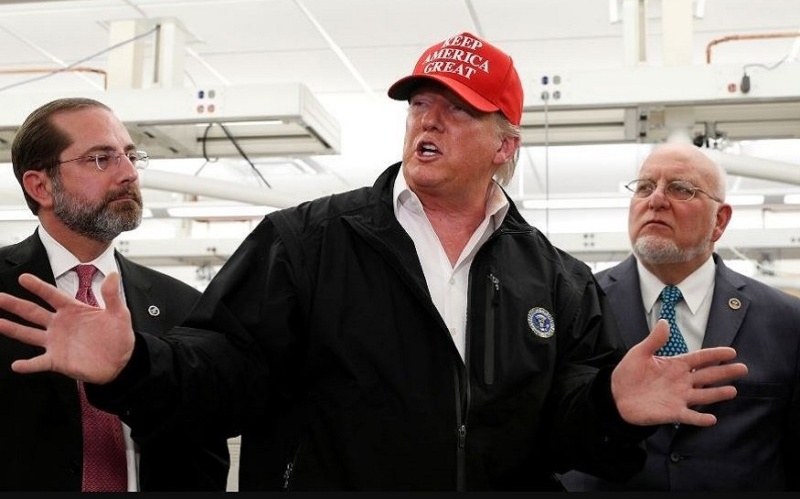 Donald Trump at the Center for Diseases Control, March 6, 2020: “Every one of these doctors said, ‘How do you know so much about this?'” (Tom Brenner/Reuters)

The US lost at least 70 days in preparations for Coronavirus because of denial and mismanagement by Donald Trump and his Administration.

This account of the delay, drawn from The Washington Post and other sources, is written as the US death toll reaches 10,994 amid 368,449 cases.

Monday’s rise of more than 1,300 is the sixth consecutive day with at least 1,000 fatalities. White House medical advisors have warned that up to 240,000 Americans will die even if belated mitigation measures are effective.

The Center for Diseases Control and Prevention learned of the outbreak in Wuhan, China on December 31. Three days later, a Chinese official called CDC Robert Redfield to give details of the mysterious respiratory illness.

Redfield relayed the news to Health and Human Services Secretary Alex Azar, who notified the White House and the National Security Council.

Chinese officials hindered initial US attempts to learn more about the virus, rejecting the offer of CDC assistance which could have given US doctors a sample of Covid-19. On January 14, Chinese authorities claimed “no clear evidence of human-to-human transmission.”.

However, US officials were already sceptical as a case was reported in Thailand. State Department personnel were discussing a potentially serious situation by the third week of January, with US diplomats were brought home from Wuhan.

Their barrier was Trump, who spent weeks denying that there was any problem with the virus, calling it a Democratic “hoax” seeking to undermine him.

Health Secretary Azar was unable to speak with Trump until January 18. When he made phone contact, Trump shifted the discussion to when flavored vaping products would be back on the market.

Azar told associates that he could not get Trump, who believed the Health Secretary was “alarmist”, to give any attention to the seriousness of the virus.

Amid inter-agency meetings, Azar was able to announce on January 31 that entry into the US would be barred to non-US citizens who had been in China during the preceding two weeks.

But 300,000 people had already come into the US from China over the past month. And Trump and the Treasury, worried about the effect on the US economy, blocked a ban on entry by Europeans — even as the virus was surging in northern Italy.

“Going to Work Out Fine”

Meanwhile, the Administration rejected a World Health Organization test to determine the spread of the virus. Instead, it decided that it would use one developed by the CDC.

But the CDC effort produced a faulty test. At one point, a Food and Drug Administration official told the Center that lapses in protocol, including concerns aobut sterile conditions, were so serious that the FDA would “shut you down” if the CDC were a commercial lab.

By early February, White House officials warned of a shortage of tests to determine the rate of infection. But throughout the month, Trump responded with public declarations such as “it’s going to work out fine” and “we’re going to be pretty soon at only five people”.

Acting White House Chief of Staff Mick Mulvaney and aides discussed how to get Trump to take the issue seriously, failing to break Trump’s belief that the virus had not spread through the US.

But in public, Mulvaney — soon to be dismissed by Trump — covered his boss’s denial. He told the Conservative Political Action Conference on February 28 that the media was stoking a panic: “The reason they are paying so much attention to it today is that they think this is going to bring down the president.”

He implied Coronavirus was no worse than flu, and he said people should ignore the media to calm the US stock market, dropping sharply since February 21 amid global news of the outbreak.

Meanwhile, Trump appeared oblivious to the difficulties. As he toured the CDC on March 6, he said its tests — now rejected as unsuitable — were nearly perfect and that “anybody who wants a test will get a test.

I like this stuff. I really get it. People here are surprised that I understand it. Every one of these doctors said, “How do you know so much about this?”

Failing to Deal with Shortages

Trump and his officials were also covering up the lack of medical equipment.

The Strategic National Stockpile had been underfunded for years, leading to shortages of masks, personal protection equipment, and other supplies. Much of the Stockpile’s equipment had been made in China, which now had closed factories and a priority on keeping masks and equipment in the country.

In late January and early February, Health and Human Services asked the White House Office of Management and Budget for authority to shift $136 million into programs to combat Coronavirus. Azar and his aides said a supplemental budget request, for billions of dollars, should be sent to Congress.

White House staff rejected the approaches, saying they would be viewed as alarmist.

It was only in late February that the OMB accepted a plan for $2.5 billion. Congress went farther, approving an $8 billion supplemental budget bill.

In late March, the Administration finally ordered 10,000 ventilators, a fragment of what is needed by State and local health officials. Even these will not arrive until summer or fall.

“It’s actually kind of a joke,” said one administration official.

For weeks Dr Anthony Fauci, the director of the National Institute of Allergy and Infectious Diseases, pressed the Administration to implement social distancing measures. But it was only in mid-March that he got traction, after a warning from a GOP pollster of the effect on the re-election campaigns of Trump and Republican legislators.

“Denial is not likely to be a successful strategy for survival,” Neil Newhouse concluded in the document shared with GOP leaders on Capitol Hill and discussed widely at the White House. “[Trump supporters are] putting themselves and their loved ones in danger.”

On March 16 the Administration announced guidelines such as closures of schools, bars, and restaurants; suspension of public events; and no gatherings of more than 10 people.

Still, Trump resisted. A week later, he dismissed adherence to the guidelines, “It’s not for our country and we are not built that way.”

“I would love to have the country opened up and raring to go” by Easter, April 12, he declared.

Amid his ongoing verbal assaults on State Governors and journalists, his denials of any mismanagement, and his promotion of an untested drug as the solution to the crisis, Trump reiterated on Sunday, “Now we have to open. We have to open our country.”