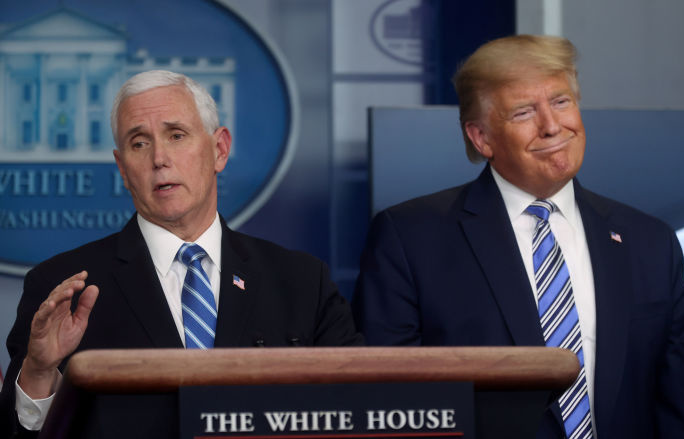 Donald Trump defies the spread of Coronavirus in the US with the pledge to scale back Government guidance by Easter, April 12.

Trump used two White House briefings on Tuesday and an appearance on his favored outlet Fox to repeat his sniping at the social distancing guidelines, announced by the Administration last week on the advice of medical and public health experts.

I would love to have the country opened up and raring to go [by Easter].

Our people are full of vim and vigor and energy. They don’t want to be locked into a house or an apartment or some space. It’s not for our country, and we are not built that way.

His declaration flew in the face of the confirmed Coronavirus toll in the US, now at more than 600 deaths and more than 55,000 cases, the third-highest total in the world. The number has been rising sharply, doubling within a few days.

Trump says he picked the Easter target not because any scientist told him that, but because he thought it would be a "beautiful time" to come back.

More than 25,000 of the cases are in and near New York City, with the spread of the virus 8 to 10 times greater than elsewhere in the US. New York State Governor Andrew Cuomo repeated Tuesday that hospitals face critical shortages of masks, ventilators, and supplies.

But Trump and the Administration again refused to invoke the Defense Production Act to compel manufacture of the medical provisions, insisting that the private sector would fulfil the need without an order.

Instead, the Administration said anyone leaving the New York area should self-isolate for 14 days to avoid spreading the virus in other parts of the country.

One of the forecasters said to me, “We were looking at a freight train coming across the country. We’re now looking at a bullet train” because the numbers are going up that quickly.

Trump: No Worse Than Flu and Automobile Accidents

On March 16, the Administration finally issued guidance after Dr Anthony Fauci, the director of the National Institute of Allergy and Infectious Diseases, insisted for weeks that urgent steps were needed for social distancing — and after State and local governments and officials instituted measures as Trump continued to deny that the situation was serious.

The Administration’s recommendations include school closures; avoidance of groups of more than 10 people; and a halt to non-essential travel and visits to bars, restaurants, and food courts.

But fixed on the 35% drop in the US stock market and on his re-election campaign, Trump began campaigning via Twitter on Sunday night for the rollback of the guidance after 15 days: “WE CANNOT LET THE CURE BE WORSE THAN THE PROBLEM ITSELF.”

He and his allies continued the drumbeat through Monday and in Tuesday’s appearances. Trump used the Fox broadcast to repeat “false analogies” denounced by Fauci.

You can destroy a country this way, by closing it down.

We lose thousands and thousands of people a year to the flu, but we don’t turn the country off. We lose much more than that to automobile accidents. We don’t call the automobile companies and say, “Stop making automobiles.”

There was a moment on Tuesday when it appeared Trump had been checked by his advisors and reality.

To be a week into these restrictions and already be talking about abandoning them is irresponsible and dangerous….[Coronavirus would] spread widely, rapidly, terribly, and could kill potentially millions in the year ahead with huge social and economic impact.

Caitlin Rivers, an epidemiologist at the Johns Hopkins Center, explained, “We don’t have the strategy or tools we need to be talking about ‘relax restrictions’. We need to be trying to get them as fast as possible. That’s why you have a federal government.”

Observers noted that Fauci — who said in a weekend interview that he was having to “push back” against misleading statements by Trump — was absent for the second day in a row.

But the doctor reappeared at a second, hastily-arranged briefing, saying, “We have to act policy wise on data.”

Trump appeared to defer to the advice in a scripted statement, “Our decision will be based on hard facts and data. Rest assured, every decision we make is grounded in the health, safety and well-being of our American citizens.”

That retreat to serious consideration soon disappeared. Trump set aside the script and dashed towards his Easter projection.

I think that would be a great thing for our country. We’re all working very hard to make that a reality. Easter is a very special day for a lot of reasons. What a great timeline that would be.

He blared in the Fox broadcast:

The measures include a $500 billion fund to bail out large firms and industries, $367 billion for small businesses, direct payments of $1,200 to Americans, assistance for workers affected by the crisis, $150 billion in support for states, and $130 billion for hospitals.

Help is on the way, big help and quick help. We’re going to take up and pass this package to care for those who are now caring for us, and help carry millions of Americans through these dark economic times.

The plan, equivalent to 10% of US annual GDP, fell short of Senate approval on Sunday and Monday, as Democrats called for adequate oversight of the $500 billion fund and for more help for workers.

You know, I wouldn’t say there were any thorny, any particular thorny issues. This is a very complicated piece of legislation. It’s a very large investment in the U.S. economy.

And people worked tirelessly around the clock going through the documents. So, again, couldn’t be more pleased.