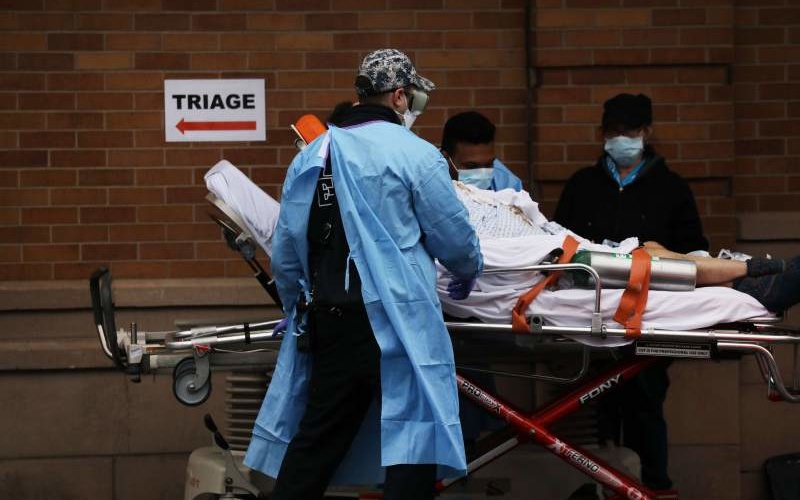 As another 1,400 Americans are killed by Coronavirus, Donald Trump defies his medical experts to challenge social distancing and to promote use of an untested drug.

But in a rambling, sometimes slurred presentation at Saturday’s White House briefing, Trump brushed away the immediate crisis over the lack of life-saving ventilators and essential medical supplies. He again attacked State governors trying to cope with the situation amid the Federal Government’s lack of coordination.

Trump criticizes New York for asking for tens of thousands of ventilators: "When they know they do not need it, they want it anyway. It gives them that extra feeling of satisfaction, but we cannot do that. It is not even possible. We are a backup." pic.twitter.com/h4g8LOinH9

Meanwhile, Trump put a priority on declaring that social distancing guidelines must be lifted as soon as possible, despite the assurances of the White House’s top doctors, Drs Anthony Fauci and Deborah Birx, that they are needed to save hundreds of thousands of lives.

Remember we had the greatest economy in the world and then one day we were told, “You got to shut it down. Stop it. Tell everyone to stay home because of this horrible virus.” And we did that and we did the right thing, but now we have to open. We have to open our country.

Fauci, the director of the National Institute of Allergy and Infectious Diseases, emphasized the need to continue guidelines such as the closure of schools, restaurants, bars, and cinemas and a limit on gatherings to 10 people.

The death rate is “going to continue to go up”, he cautioned while explaining at length that “mitigation works”: “As sobering and as difficult as this is, what we are doing is making a difference. So we really need to continue to do that.”

But Trump brushed aside the doctor. He rejected a stay-at-home order from the Federal Government to organize social distancing across all 50 states. Then he declared:

Pressed by Fauci and Birx, the coordinator of the White House task force on the virus, the Administration finally issued the guidelines on March 16. But a week later, Trump used Twitter to undermine the effort.

WE CANNOT LET THE CURE BE WORSE
THAN THE PROBLEM ITSELF. AT THE END OF THE 15 DAY PERIOD, WE WILL MAKE A DECISION AS TO WHICH WAY WE WANT TO GO!

He insisted that “the country [would be] opened up and raring to go” by Easter, April 12.

The doctors were able to push back Trump by showing him images from New York City, the epicenter of the US crisis, and with a projection of up to 240,000 deaths even with the best mitigation efforts.

But some Administration officials have continued to leak to the press that they want the lifting of the guidelines as soon as possible, portraying a split White House despite the medical advice.

Trump used the suspension of sporting events to press his case, claiming discussions with franchise owners:

Trump sniffed and often struggled with words, including “Coronavirus” and “hydroxylchloriquine”, the untested drug which he is promoting as a treatment.

He pressed on to:

*Assail the media and the State Governors for raising the ventilator issues, amid warnings that some areas will be at capacity this week and that Federal Government’s Strategic Emergency Reserve is exhausted

*Rebuke New York Governor Andrew Cuomo for requesting more ventilators, amid a death toll of 3,545 and 114,174 with a rise expected up to the end of April:

When they know they do not need it [ventilators and medical equipment], they want it anyway. It gives them that extra feeling of satisfaction, but we cannot do that. It is not even possible. We are a backup.

He jabbed at Cuomo for not being “gracious” about assistance from the Federal Government: “I know he appreciates it, but he just can’t get the words out.”

*Passed the blame to US companies for any shortage of supplies, citing the multinational conglomerate 3M: “The people that have dealt with [3M]…don’t like the way 3M has treated our country. They don’t frankly like the representatives of 3M.”

*Justified the firing of US Navy Capt. Brett Crozier, fired from his command of the aircraft USS Theodore Roosevelt after he expressed concern that 155 crew on the ship tested positive for Coronavirus: “I thought it was terrible what he did, to write a letter.”

Watch this video of the send off of Captain Crozier, commander of the aircraft carrier USS Roosevelt who was fired yesterday for sounding the alarm to protect his sailors. Tells you everything you need to know about the type of #leader he is. pic.twitter.com/z9q3pTJpgZ

Trump then made another pitch for hydroxylchloroquine, the anti-malaria drug which he is touting as a treatment of Coronavirus:

TRUMP: "I hope they use the hydroxychloroquine … I hope they use it because I'll tell you what, what do you have to lose?" pic.twitter.com/hYeQETmoSE

There have been anecdotal claims that hydroxylchloroquine, in combination with other drugs, can ease the damage of the virus. Last month, Trump saw the claims on his favored outlet Fox and was also pressed by a friend to take action.

He falsely said the Food and Drug Administration had approved the treatment, continuing to press his case after the FDA denied the claim and Fauci said there had been no significant testing.

Doctors warned that the combination of hydroxylchloroquine and other drugs could disrupt heart rates, at the risk of death. Medical specialists noted that Trump’s whipped-up demand meant the hydroxylchloroquine might not be available to treat malaria and lupus.

But Trump’s Saturday defiance included the fantasy claim that “people that have lupus haven’t been catching this virus” before checking himself: “Maybe that’s correct. Maybe it’s false.”

He then doubled down on his bet against his medical advisors:

The FDA has given emergency authorization for testing of hydroxylchloroquine on Coronavirus patients on a trial basis.