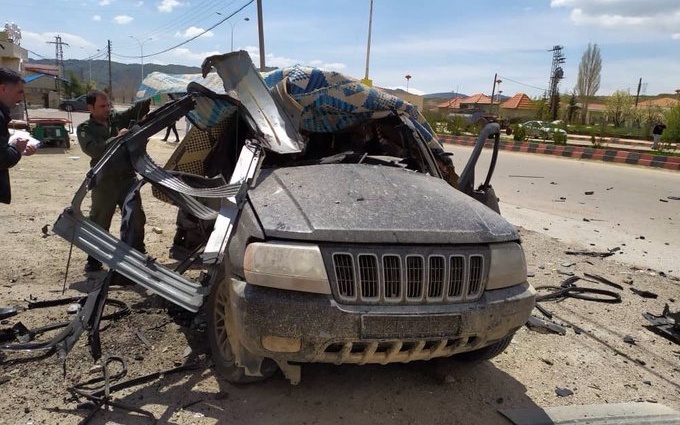 A vehicle carrying Hezbollah members, struck by an Israeli drone in Syria near the Lebanese border, April 15, 2020

Israel has again attacked the Lebanese organization Hezbollah inside Syria, with a drone strike on a car near the border with Lebanon.

First reports claimed Hezbollah members were killed when two missiles were fired on a civilian vehicle allegedly moving weapons. However, later accounts, including from an Assad regime army commander and a Hezbollah official, said there were no fatalities although several men were injured.

#Israel Air Force launched an strike on a car said to belong to an Hezbollah senior member on the #Lebanon–#Syria border
📸 pic.twitter.com/UOVGFYHgHO

Neither Hezbollah nor the Israel Defense Forces commented on the operation.

Last week the IDF warned the Assad regime not to permit Hezbollah’s presence near the Israeli-occupied Golan Heights. It showed video claiming to be a commander of the Syrian army’s 1st Division and other officers in the area.

The Israeli military asserted, “You will be held responsible for all enemy activities emanating from its territory. Consider this a warning.”

Israeli Prime Minister Benjamin Netanyahu and the military have repeatedly warned that they will not tolerate the presence of Iranian-led militia or Hezbollah in southwest Syria near the Golan.

During negotiations which accepted Russia’s military intervention in September 2015 to prop up the Assad regime, Netanyahu obtained Moscow’s agreement that there would not be any Iran-Hezbollah deployments close to the Golan.