Syria Daily: The Only Coronavirus Testing Machine in Opposition-Held Northwest 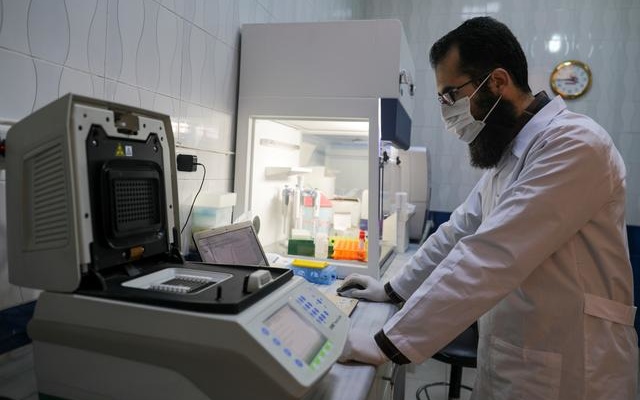 There is a Coronavirus testing machine in the medical center of Dr Mohammad Shahim Makki in Idlib Province in northwest Syria.

It is the only machine in the greater Idlib area, where an estimated 3 million people live.

The lone device is a stark sign of the threat faced from the virus in an area which endured a 10-month Russian-regime offensive from last April. The assault killed about 2,000 civilians, displaced more than 1 million, and seized almost all of northern Hama Province and much of south and east Idlib.

There is no confirmed case of Coronavirus yet in the densely-populated territory. But medical personnel, activists, and residents fear a quick spread, especially in crowded camps for displaced people.

The camps have poor sanitation and hygiene, with little or no running water. The director of an aid foundation said in late March, “You want us to wash our hands?. Some people can’t wash their kids for a week. They are living outdoors.”

More than half of greater Idlib’s medical facilities were damaged or destroyed in about 70 Russian-regime attacks during the offensive.

There are only 153 ventilators and 200 beds in intensive care.

The World Health Organization belatedly promised to provide testing, but so far only 120 tests have been carried out on 300 samples.

About 5,000 samples have been received this week, but it is unclear how they processed.

Makki, who runs the Epidemiological Surveillance Laboratory, says the machine “is not sufficient to serve all these people, so there is pressure on the device. And since it is the only one, strict criteria are being used to select samples.”

Setting up other test devices is hindered by the high cost and the training needed to run them.

“Unfortunately, we don’t have areas of quarantine available in north Syria,” says Abd al-Razzaq Zaqzouq of the Syrian American Medical Society. “If there is any case of corona in north Syria, the situation will be tragic.”

Ahmad al-Dbis of the medical charity UOSSM summarizes the danger:

If corona spreads in the northwest it will be a catastrophe. The number of deaths will be very big and infections will be huge, in the hundreds of thousands.