Syria Daily: Coronavirus — “Wash Our Hands? We Can’t Wash Our Kids For A Week” 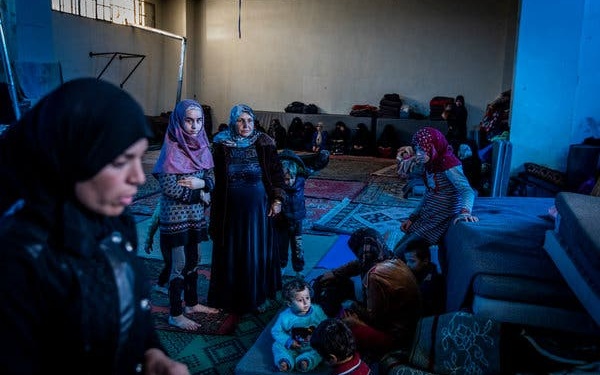 As the Assad regime continues its denial of Coronavirus, doctors and aid workers in opposition-held northwest Syria have repeated their warnings of conditions for an outbreak.

Still waiting for test kits to arrive, medical staff told The New York Times of the conditions in Idlib Province for more than a million civilians displaced since last April by Russian-regime attacks.

Fadi Mesaher, the director in Idlib Province for the Maram Foundation for Relief and Development, described little or no running water and up to a dozen people living in the same tent.

“You want us to wash our hands?” he summarized. “Some people can’t wash their kids for a week. They are living outdoors.”

Last week, the World Health Organization’s representative in Syria, Ni’ma Saeed Abid, told an EA correspondent that tests could not be conducted in the northwest. The WHO changed its position to say that machinery and tests would be available by this weekend.

But the testing kits have not yet been delivered. Doctors said the delays has probably contributed to the spread of the virus, undetected, for weeks.

“We currently have cases that are similar, and we’ve had people die,” said Dr. Mohamed Ghaleb Tennari, who manages the Syrian American Medical Society’s hospitals in the northwest. “But unfortunately because we don’t have the test, we can’t confirm that these cases are truly corona or not.”

More than half of the medical facilities in the greater Idlib area have been destroyed or damaged by the Russian-regime offensive, paused on March 5 after Idlib Province was partitioned in a Turkish-Russian agreement.

With few resources and with overworked medical staff trying to cope in the remaining facilities, there are no screening points on the Turkish border for the virus. The first WHO shipment of masks and gloves only arrived in Idlib on Tuesday.

The White Helmets civil defense has disinfected public areas but, amid devastation in the province, has only been able to set up three containment centers with 60 beds. Doctors have warned that 10,000 people could need ventilators, but there are only 153 in Idlib.

“Unfortunately, we don’t have areas of quarantine available in north Syria,” said Abd al-Razzaq Zaqzouq of the Syrian American Medical Society. “If there is any case of corona in north Syria, the situation will be tragic.”

Munzer al-Khalil explains, via journalist Ali Rogin, that there are only 200 beds in intensive care units.

They don’t have any tests now. And when they do get samples from people who are suspected of illness, they can’t send them anywhere — Turkey won’t take them and the regime in Damascus certainly won’t.

THREAD – Some sobering details from @AlkhalilMunzer, the head of the @IdlibD, Idlib Province's health systems in northwest #Syria. He is predicting a catastrophe.

First: The Assad regime, along with its Russian allies, has already destroyed about 76 medical centers in NW Syria.

Saeed Abid, the WHO representative in Damascus, proclaimed to Reuters, “If we take the scenarios in China or even in Iran, we are expecting we may have large number of cases and we are preparing accordingly.”

Hedinn Halldorrson, a spokesman for the WHO in southern Turkey, said Wednesday that the organization expects test kits to arrive in Idlib next week. He said he did not know how many kits will be sent.

He said the delay in dispatch was because the WHO sent kits to the Assad regime first.

“The northwest is not a country,” he contended.

Halldorrson said a month’s delay in delivery of medical supplies was acceptable:

When you consider the challenges, I think it’s quite reasonable. I don’t know the nitty-gritty details of it, but they will be there soon, that’s all I know.

At the Atmeh camp near the Turkish border, Amina Alkaeed spoke amid open sewage in the roads and piles of garbage for which there is no collection.

As women gathered to fill water jugs from a tank and pick up bed, she noted:

That bread is wrapped in a bag. That bag could be carrying the virus. Then the virus will be transferred to these people….

This virus can kill more people in one month here in northern Syria than the regime killed in the last 10 years.

Meanwhile, the Assad regime continued to defy medical assessments and insist that there has been a case of Coronavirus.

But he rejected the criticism of residents that the regime’s statements are “bullshit”.

The health ministry is the only source of information about this matter and not rumors circulating on social media When there is an infection, it will be announced.

Kurdish officials in northeast and east Syria say they have closed all crossings with regime-held areas.