Iran Daily: Rouhani — “Coronavirus with Us for Months” as Millions Lose Jobs 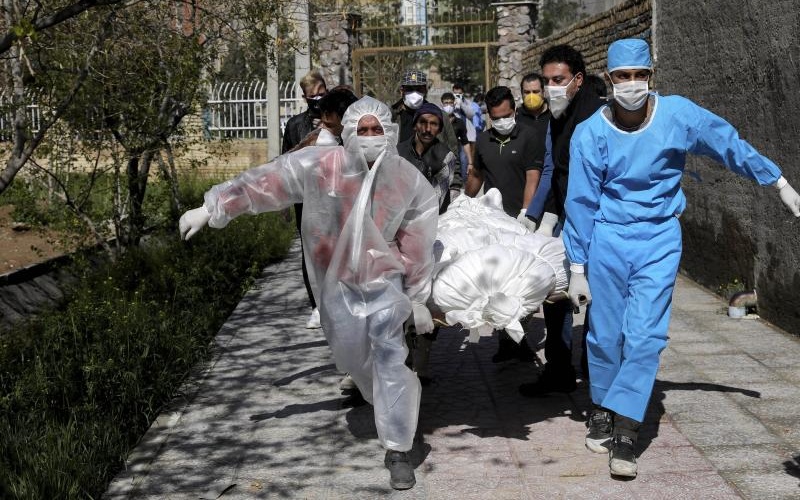 Medics carry body of a Coronavirus victim at a cemetery outside Tehran, Iran (Ebrahim Noroozi/AP)

The Health Ministry has raised the death toll to 3,452, an increase of 158 from Friday.

President Hassan Rouhani, who recently said Iran’s Coronavirus crisis “may ease within two to three weeks”, now says the virus “may be with us for months to come, maybe by the end of the year”.

Meanwhile, Iran’s Red Crescent pointed to the economic fallout, acknowledging that two million Iranians have lost their jobs and are not covered by State benefits or charities.

Rouhani tried to give assurances at Thursday’s meeting of the Economic Board set up for the outbreak. He proclaimed, “We will have no issues supplying the currency for health and basic goods until the end of the year,” and said that “he amount of basic goods in the country is very promising”.

I emphasize that coronavirus is not a matter of saying one day it will be completely over. Coronavirus may be with us for months to come; maybe by the end of the year.

On Friday, Rouhani ordered Labor and Welfare Minister Mohammad Shariatmadari to allocate 750,000 billion rials (about $4.6 million) in credit to businesses who guarantee they will not lay off workers.

The President had said on March 20, in an address for Iranian New Year, that the virus might be contained by early April.

However, he shifted his tone by the end of March, declaring that a “major part” of Iran’s economy would have to be shut down: on Sunday and saying “a new way of life” in Iran is likely to be prolonged: “These changes will likely have to stay in place for some time.”

See also Iran Daily, March 31: Rouhani Throws Away His “Coronavirus Will Ease in 2 to 3 Weeks” Declaration

Rouhani told Ministers, “We must prepare to live with this virus until a treatment or vaccine is discovered, which has not yet happened to date.”

“The Coronavirus crisis has hit a significant number of vulnerable individuals including daily wage earners and street peddlers. The Red Crescent Society will provide help to these people in the coming days,” Hemmati promised.

Government spokesman Ali Rabiei had said that up to 400,000 workers might lose jobs because of the crisis.

Hemmati also pointed to the challenge for Iran’s hospitals as they fight the virus: “While the Ministry of Health urgently needs 2,000 ventilators, the charitable donors have [only] promised to purchase 100 ventilators and 52 devices have been purchased so far.”

The Health Ministry raised the official death toll on Friday to 3,294, among 53,183 confirmed cases.