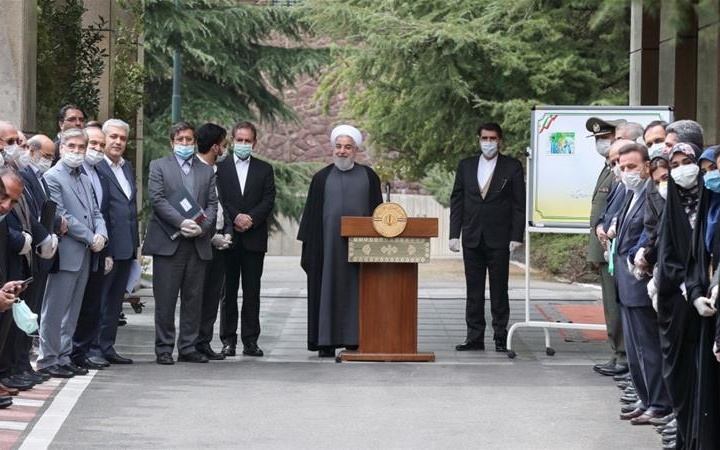 As Iran’s Coronavirus death toll surges, President Hassan Rouhani — concerned about the state of the economy — insists that the virus may ease in two to three weeks.

Rouhani said in a televised address on Saturday that the country “has to do everything” to return economic activity back to normal.

His statement came after a day after the Supreme Leader declared that the priority for the Iranian New Year must be a “Surge in Production”.

Amid long-term internal problems and US sanctions, Iran is facing difficulties with production, trade, investment, employment, and currency. Its oil exports have fallen between 80% and 95%.

But despite the increasing rate of fatalities and his Government’s resistance to quarantines, Rouhani maintained that measures to check the virus’s spread will soon succeed: “It is clear that all the efforts made by the medical staff, doctors, nurses and all our loved ones in the field of treatment, as well as the armed forces involved in the treatment and disinfection of public sites, have had a great impact.”

While holding out against the quarantines, the Government has closed schools and universities until early April, as well as four key pilgrimage sites, including the Fatima Masumeh shrine in Qom.

Authorities have also cancelled the main weekly Friday prayers, temporarily closed Parliament, and suspended public ceremonies for New Year, including the Supreme Leader’s speech in the second city of Mashhad. Checkpoints have been established to limit movement between cities, but many Iranians have circumvented the barriers.

Rouhani pleaded with Iranians not to travel for the next two weeks, and for the ill to remain at home until they are in critical condition, reducing the strain on overcrowded hospitals.

But the President mitigated the statement with his economic priority and his declaration of an imminent lifting of the crisis.

Echoing his language — and that of the Supreme Leader — since the outbreak last month, Rouhani declared that Coronavirus is being used by “the conspiracy of the Anti-Revolution…to make work and economic activity shut down in Iran and we must stop them from reaching their goal”.

On February 23 — with the official death toll at eight among 43 cases — the Supreme Leader proclaimed that fear of Coronavirus was a “Western plot” to depress the historically-low turnout in Parliamentary elections two days earlier.

Rouhani followed with his opposition to quarantines, proclaiming the “foreign conspiracy” to shut down activity in Iran.

However, the regime’s latest assertions were further challenged by documents pointing to its cover-up of the outbreak of the virus.

Officials claim they learned of the virus on February 19 and informed the public on the same day, 48 hours before the Parliamentary elections.

But guidelines issued day by the Civil Defense Organization refers to discussions on January 31 among officials about the possibility of Coronavirus in Iran.

Significantly, the guidelines said there should be “intensified control of public gatherings and an emphasis on public health” but only “after the elections”.