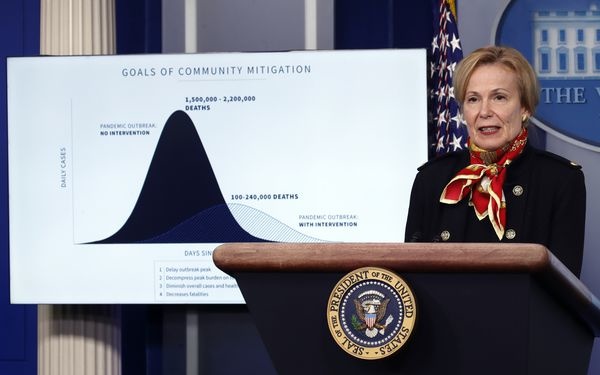 Finally pushing back Donald Trump, White House officials warn that up to 240,000 Americans will due from Coronavirus, even with effective measures for mitigation.

But State and local officials continue to warn that those measures are not being implemented, and that medical systems face an exhaustion of protective equipment and life-saving ventilators

The White House briefing was a marked contrast to that on Monday, which Trump used as a cheerleading session with company CEOs. Offficials amplified the weekend statements of Dr Anthony Fauci, the director of the National Institute of Allergy and Infectious Diseases, of a death toll of 100,000 to 200,000.

Dr Deborah Birx, the head of the White House Coronavirus task force, spoke of modelling that 1.5 million to 2.2 million Americans could die if social distancing and other community mitigation efforts were not pursued.

Using a slide show, she marked out the center of the epidemic in New York, New Jersey, and Connecticut, sites of more than half of the almost 3,800 deaths in the US.

She said the goal was to control the outbreak in that area while preventing its spread to the other 48 states: “If you had more New Yorks and New Jerseys — you know, Chicago, Detroit, L.A., Dallas, Houston, all of our major cities modeled like New York — that’s what gets us into trouble.”

Trump initially denied any threat from Coronavirus, saying it was a Democrat “hoax” to undermine him. Until recent days, he asserted that the virus would “maybe go away”: “One day it’s like a miracle – it will disappear.”

Even last week, Trump was pushing back against the Administration’s belated guidelines for social distancing, saying they could be lifted by Easter, April 12.

Yesterday he put aside some of his past declarations and followed his officials’ lead on social distancing, with guidance for closure of schools, restaurants, and bars and gatherings of no more than 10 people until April 30.

“Our country is in the midst of a great national trial unlike any it has ever faced before,” Trump said. “This is going to be a very painful — very, very painful two weeks.”

He acknowledged that he had been shaken out of his false statements by images of deaths and medics struggling to save lives, and by the assessments of Fauci and Birx. He passed blame to his business friends — and retracted his claims that Coronavirus is no worse than influenzea — saying that he was advised, “Don’t do anything, just ride it out and think of it as the flu.”

Trump acknowledged, “But it’s not the flu. It’s vicious.”

But he continued to assert that there would be a quick ebbing of the virus and lifting of restrictions, “It’s going to be like a burst of light, I really think.”

In contrast, Birx cautioned, “There’s no magic bullet. There’s no magic vaccine or therapy. It’s just behaviors — each of our behaviors translating into something that changes the course of this viral pandemic over the next 30 days.”

He complained about the “total hoax” of his impeachment, assailed House Speaker Nancy Pelosi, and jabbed at New York State Governor Andrew Cuomo, widely praised for his handling of the crisis amid the lack of coordination by the Federal Government.

Trump continued to argue that State pleas for medical equipment and supplies, including those of Cuomo, were overblown: “For some people, no matter how much you give, it’s never enough.”

The remark echoed Trump’s statement last week that the governors were making up the need for ventilators: “A lot of equipment is being asked for that I don’t think they will need….Some of these governors, you know, they take, take, take, and then they complain. You build them a hospital, and then they’re always complaining.”

Trump repeated other false assertions, including, “Nobody knew how contagious this was. I don’t think any doctor knew it at the time. People have not seen anything like this.”

In fact, a National Security Council playbook from 2016 had envisaged arrangements for a pandemic, and a medical exercise last autumn tested the US system. But Trump, who dismantled the White House office for pandemics in 2018, took no heed.

He said wrongly that he had banned travel from Italy to check the entry of Coronavirus into the US. The Administration never issued a ban, but only an advisory.

And Trump continued to tout the anti-malaria drug hydroxylchloriquine as a proven treatment for Coronavirus, even though it is largely study and there are no substantial scientific studies.

“It’s tested in the sense that you know it doesn’t kill you,” he declared.

“We Do Not Have Enough Ventilators”

Earlier on Tuesday, the State leaders said that, despite claims of Federal assistance, the situation with medical supplies and testing was critical.

Connecticut Gov. Ned Lamont said the national strategic stockpile is empty. The state received 50 ventilators from the Federal Government but “now we are on our own”. He said he felt like a general sending soldiers into battle without proper protection.

Lousiana Gov. Jon Bel Edwards said the New Orleans region could reach capacity on ventilators by Saturday and on hospital space by April 7.

Nurses in Denver, Colorado said that they are running out of sedation drugs because of intubating so many patients.

The Administration tried to counter with the announcement that a plane from Russia with personal protective equipment and other supplies, hailed by a Trump as “very nice”, will land on Wednesday.

And Trump defied the Governors’ appeal for supply now rather than later:

We also are holding back quite a bit. We have almost 10,000 ventilators that we have ready to go. We have to hold them back, because the surge is coming and it’s coming pretty strong and we want to be able to immediately move it into place without going and taking it, so we’re ready to go.

In a further sign that the Administration is either holding back the ventilators or is not ensuring provision, the Defense Department said it has not delivered 2,000 ventilators because no civilian agency has asked for them or provided a shipping location.

New York Gov. Cuomo explained that ventilators were still not being provided to the state, despite its high death toll. He said the problem was compounded because the Federal Emergency Management Agency had “big-footed the states” by “capturing the market” for the equipment and then not distributing it.

The federal government, FEMA, should have been the purchasing agent: buy everything and then allocate by need to the states. Why would you create a situation where the 50 states are competing with each other and then the federal government and FEMA comes in and competes with the rest of it?