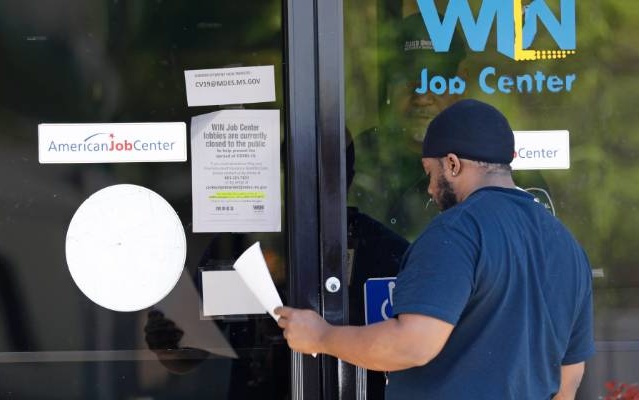 More than 6.6 million Americans filed for unemployment in the week ending April 4, continuing the record loss of jobs due to the Coronavirus crisis.

The new applicants brought the total to 16 million jobs in three weeks, raising the national unemployment rate from 3.5% to well above 10%.

Before March, the weekly record for unemployment applications was 685,000, set in October 1982. More people have lost jobs since mid-March than in the two years of the Great Recession after the 2008 financial crash.

Economists said the rate of unemployment could surge even higher. Florida and Texas, which account for 15% of payrolls, only closed non-essential businesses in the middle of last week.

On Thursday, the Federal Reserve said it would inject into the economy a further $2.3 trillion in loans, including to small businesses and to US states and cities.

Trump: Lift Social Distancing by May 1

“People familiar with the discussions” said Trump, worried about the effect of a declining economy on his re-election campaign, is pressing for a resumption of business activity by May 1.

And in calls with outside advisors, Trump is seeking the opening of much of the US even before then. The sources said Trump is concerned about the surge in unemployment and instability in a stock market which has lost 20% in value since February 21.

Trump said at Thursday’s White House briefing that the US was at the “top of the hill” over Coronavirus: “Hopefully, we’re going to be opening up — you could call it opening — very, very, very, very soon, I hope.”

Attorney General William Barr gave support on Wednesday with the declaration that stay-at-home orders, now in place in 44 states, are “draconian”.

The Administration belatedly issued social distancing guidelines on March 16. They included the closures of schools and public spaces such as restaurants and bars; suspension of events; and limits on gatherings to 10 people.

But within a week, Trump was pushing aside the advice of Dr Anthony Fauci, the director of the National Institute of Allergy and Infectious Diseases, saying the US would be open by Easter, April 12.

Images of the emergency in New York City, where 4,778 people have died, reportedly checked Trump. But he was soon back on the offensive, saying last Saturday, “Now we have to open. We have to open our country.”

On Wednesday, Dr Deborah Birx, the head of the White House Coronavirus team, said models projecting from 100,000 to 240,000 deaths have sharply revised the number downwards, as Americans have drastically changed their behavior.

But Dr Fauci cautioned against any relaxation of social distancing “We know now for sure that the mitigation that we have been doing is having a positive effect but you don’t see it until weeks later….Don’t get complacent about that.”

State governors, who will decide whether to ease stay-at-home orders, indicated on Thursday that they will continue the measures. Governor Gretchen Whitmer of Michigan announced the orders will remain until April 30, while Connecticut’s Ned Lamont extended them to May 15.