TrumpWatch, Day 1,775: Coronavirus — US Intelligence Warned in November of Outbreak 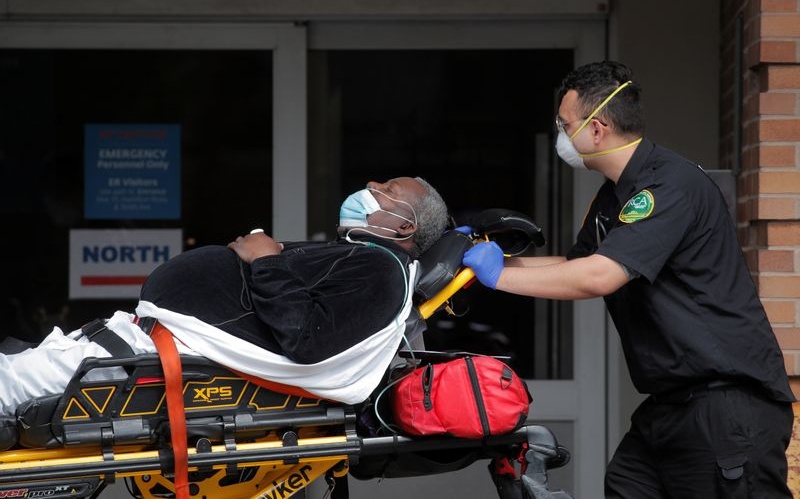 Another 6.6 million Americans filed claims for unemployment benefits in the week that ended on April 4.

The total matched the record high for the week ending March 28. In the last three weeks, about 16.6 million people have made unemployment claims.

Before March, the weekly record for new unemployment claimants was 685,000 in October 1982.

The Federal Reserve said it will inject $2.3 trillion into the US economy under new and expanded programs announced on Monday to assist companies and State and local governments.

For the second day in a row, the US death toll rose by almost 2,000 on Wednesday.

More than half the deaths are in the greater New York area. New York State has recorded 6,269 deaths and New Jersey 1,504. Michigan is third with 959.

Dr Deborah Birx, the head of the White House Coronavirus response, said models projecting from 100,000 to 240,000 deaths have sharply revised the number downwards, as Americans have drastically changed their behavior.

But Dr Anthony Fauci, director of the National Institute of Allergy and Infectious Diseases, cautioned, “We know now for sure that the mitigation that we have been doing is having a positive effect but you don’t see it until weeks later….Don’t get complacent about that.”

US intelligence officials warned the Trump Administration in November of the outbreak of a virus in China’s Wuhan region.

“Four sources briefed on the secret reporting” said a report by the military’s National Center for Medical Intelligence gathered the information from electronic and computer intercepts and satellite images.

“Analysts concluded it could be a cataclysmic event,” one official said, confirming that “t was then briefed multiple times to” the Defense Intelligence Agency, the Pentagon’s Joint Staff, and the White House.

Briefings followed through December for Government agencies, including the National Security Council.

On January 3, the same day that a Chinese official informed the US Center for Diseases Control of the Wuhan outbreak, a detailed explanation was posted in the President’s Daily Brief of intelligence matters.

Officials confirmed that the PDB assessment was only given to Donald Trump after weeks of deliberations.

“The timeline of the intel side of this may be further back than we’re discussing,” one official said. “But this was definitely being briefed beginning at the end of November as something the military needed to take a posture on.”

On Wednesday night, the Pentagon issued a statement denying the “product/assessment” existed.

But the sources confirming the report added to the dossier of Donald Trump’s dismissal and even dismantling of US preparations for a pandemic.

The Trump Administration abolished the White House office for pandemics in 2018. It took no heed of pandemic exercises in 2019, including one in October in the Johns Hopkins Center for Health Security in partnership with the Bill and Melinda Gates Foundation and World Economic Forum.

Even after the start of the outbreak, the Administration continued to slash international efforts for disease control. In an early February budget proposal, it cut US funding to the World Health Organization by 50%.

Trump brushed aside the reports of the outbreak in China, calling the virus a Democratic “hoax”. He said in a January 22 interview, “We have [Coronavirus] totally under control. It’s one person coming in from China, and we have it under control. It’s going to be just fine.”

Even the warnings from Trump loyalist and White House trade advisor Peter Navarro, of up to 500,000 deaths if action was not taken, could not shake Trump’s insistence that “within a couple of days, the cases will be down to zero”.

I can’t recall, George. But we have many people who watch this closely. We have the premier infectious disease research institute in America, within the United States Army. So, our people who work these issues directly watch this all the time.

Stephanopoulos pressed, “So, you would have known if there was briefed to the National Security Council in December, wouldn’t you?”

Esper replied, “Yes. I’m not aware of that.”