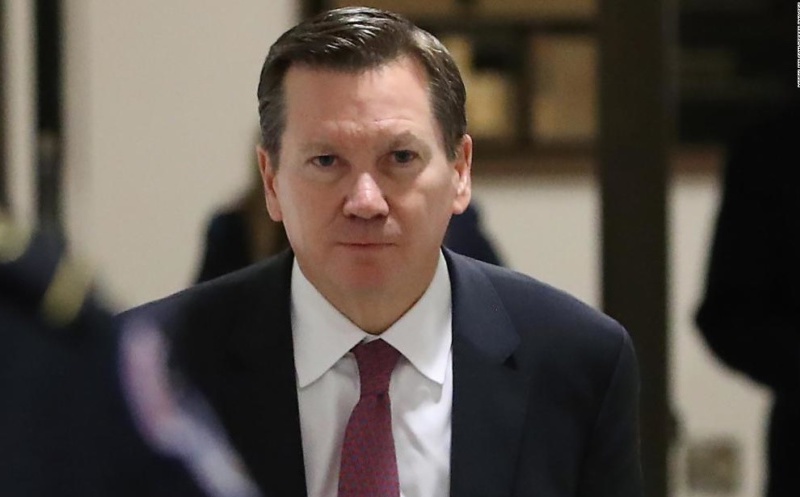 Michael Atkinson, Inspector General of the US intelligence community, leaves a meeting in the US Capitol, Washington, October 4, 2019 (Mark Wilson/Getty)

Continuing his retribution over exposure of the Trump-Ukraine scandal and his impeachment, Donald Trump has fired the US intelligence community’s Inspector General Michael Atkinson.

In the call, Trump sought Kiev’s announcement of investigations to tarnish Democratic Presidential candidate Joe Biden and to cover up Russia’s involvement in the 2016 US election. He asked Zelenskiy to meet Trump’s personal lawyer Rudy Giuliani, carrying out the campaign for investigations. And he implied that, if Kiev’s announcement was not forthcoming, US military aid — which Trump had frozen in late June — could be suspended.

The complaint was made by the CIA liaison with the White House on Ukraine matters, conveying the views of White House officials who knew of the Trump-Giuiani campaign and who heard the phone call.

Trump wrote the House and Senate Intelligence Committees late Friday night that Atkinson has been put on administrative leave, effective immediately, and must leave his post in 30 days.

He gave no specific reason for Atkinson’s firing, writing only, “It is vital that I have the fullest confidence in the appointees serving as inspectors general. That is no longer the case with regard to this Inspector General.”

Atkinson was informed on Friday evening of his firing. However, because intelligence committees must be notified 30 days before a formal dismissal, the inspector gneeral was placed on leave.

The abrupt dismissal followed Trump’s pattern of demanding loyalty from officials and then punishing them if this was not given.

In May 2017, Trump removed FBI Director James Comey, who had declined to pledge loyalty, in an attempt to quash the Trump-Russia investigation. Trump also ordered White House Counsel Don McGahn to remove Special Counsel Robert Mueller, but McGahn balked at carrying out the command.

After Republican Senators protected Trump from conviction over abuse in power in a January vote, he dismissed US Ambassador Godon Sondland, who had been part of the Trump-Giuliani campaign for the investigations. Lt. Col. Alexander Vindman, the National Security Council’s specialist on Ukraine, was escorted out of the White House by security guards.

Both men had defied White House orders not to answer House subpoenas for testimony in the impeachment hearings.

Other officials, including former US Ambassador to Ukraine Marie Yovanovitch — the target of a Giuliani disinformation campaign before Trump recalled her from Kiev — and her acting successor, William Taylor, left the State Department after the impeachment proceedings.

[This is] another blatant attempt by the President to gut the independence of the Intelligence Community and retaliate against those who dare to expose Presidential wrongdoing.

This retribution against a distinguished public servant for doing his job and informing Congress of an urgent and credible whistleblower complaint is a direct affront to the entire inspector general system.

Sen. Mark Warner, the top Democrat on the Senate Intelligence Committee, said, “In the midst of a national emergency, it is unconscionable that the President is once again attempting to undermine the integrity of the intelligence community by firing yet another an intelligence official simply for doing his job.”

But Trump, who appointed Atkinson in May 2018, continued his attacks on the Inspector General in a White House Coronavirus briefing on Saturday: “I thought he did a terrible job, absolutely terrible.

Trump falsely labelled the formal complaint a “fake report” and incorrectly said that Atkinson, who only said the CIA liaison’s assertions merited consideration, “brought it to Congress with an emergency”.

Trump railed for several minutes about the “informer” and the “fraudulent” complaint before concluding of Atkinson, “He’s a total disgrace.”

However, even the Republican chair of the Senate Intelligence Committee, Richard Burr, cautiously chided Trump:

Like any political appointee, the Inspector General serves at the behest of the Executive. However, in order to be effective, the IG must be allowed to conduct his or her work independent of internal or external pressure.

It is my hope the next nominee for the role of ICIG will uphold the same important standards laid out by Congress when we created this role.

Veteran Sen. Chuck Grassley, former head of the Judiciary Committee, said, “Congress has been crystal clear that written reasons must be given when IGs are removed for a lack of confidence.More details are needed from the Administration.”