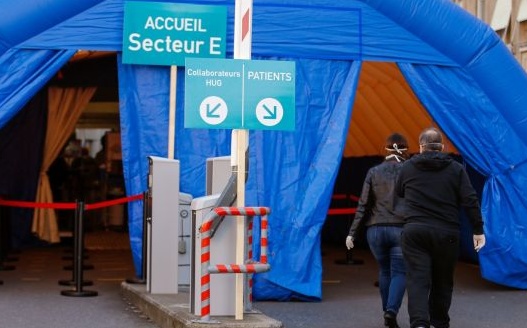 Patients at a screening tent for Coronavirus tests outside the University Hospital of Geneva, March 2020 (Pierre Albouy)

Editor’s Note: This is part of a series of analyses from the Populism in Action Project on the effect of Coronavirus on populism and politics in Switzerland, Belgium, Italy, and Finland.

Switzerland is one of the countries most affected by Coronavirus. While the situation is not as severe as in neighboring Italy, as of April 3 the Swiss had almost 600 fatalities and almost 20,000 confirmed cases.

In mid-March, because of the “rapidly worsening” outbreak, both chambers of Parliament interrupted their session and the Federal Council declared an “extraordinary situation” under the Epidemics Act.

The Epidemics Act has been in force since January 1, 2016. It distinguishes between three situations, affecting the division of responsibility between the confederation and the cantons.

In a “normal” situation, the cantons are generally in charge to enact measures that can prevent and control transmissible diseases. In a “particular” and especially in an “extraordinary” situation, the Federal Council allocates more responsibilities to itself. It may take measures which it considers indispensable without consultation of Parliament or the cantons.

Using this authority, the Federal Council declared an official state of emergency until April 19.

In a decentralized country such as Switzerland, the federal government’s invocation of extensive and exclusive power may create much controversy. So to what extent has Swiss democracy been infected by Coronavirus?

The answer is: not much so far. The Federal Council has more power but it strictly acts within the limits of the Constitution. Under Article 185, the government may issue ordinances and rulings to counter existing or imminent threats of serious disruption to public order or internal and external security.

Unlike countries such as Hungary and Poland, the situation is not leading to extraordinary changes to the country’s political system and an unprecedented centralization of power. The Federal Council’s authority is temporary. If the so-called emergency decrees last longer than six months, Parliament will have to approve an extension.

What About the Parties?

Political parties in Switzerland may react to Coronavirus by promoting their agendas or by positioning themselves as responsible players. My colleague Judith Sijstermans, in her work on Belgium, has highlighted how the right-wing populist Vlaams Belang has used the crisis as a window of opportunity to advance policy goals and justify key ideological viewpoints.

In Switzerland, the political dynamic is a bit different. On the same day as the declaration of an “extraordinary situation” and state of emergency, all parties issued a joint statement in which they declared that they would “stand united and unreservedly behind the Federal Council”. Quoting the unofficial traditional Swiss motto, “One For All – All For One”, most parties pulled together in resolute unity, unequivocally supporting the government’s measures. The populist Swiss People’s Party SVP is the only party so far which, while supporting the joint statement, denounced “shortcomings in the government’s crisis management” that have to be corrected immediately.

Trust in the Government appears to be widespread at the moment, with the members of the legislative organs deferring to the executive in convening an extraordinary session of Parliament. Some parties avoided issuing public statements, with the Social Democrats welcoming the opportunity to meet to create legal certainty and preserve democracy.

Despite their criticism of the government’s crisis management, the SVP did not seize the opportunity to hold the Federal Council accountable and suggested a later meeting, on condition that the government ends the state of emergency. The party called the extraordinary session “unnecessary and irresponsible”, while accepting the government’s assumption of more power during the “extraordinary situation”.

Most parties are still issuing statements for political life after the crisis. They still have to craft long-term strategies on topics which concern their core ideological stances over the economy, society, and security. Nevertheless, the tone of these messages is relatively moderate and largely free of personal attacks.

So why are the parties more measured in bringing in their own demands, while at the same time supporting the Federal Council’s ordinances and rulings?

First, in the current crisis the population yearns for unity and is rallying behind the political leadership. The Federal Council has delivered so far in its response, and many party representatives, Swiss citizens, business leaders, and analysts attest to its effectiveness.

This has made it easier for parties to agree that now is not the time for fierce political competition but for fostering solidarity and trust in the government. Moreover, politicizing the crisis could be detrimental for parties and would not be appreciated by the public.

Second, four of the five largest parties are represented in government. This grand coalition is working well together, and the parties have no reason to attack individual Councillors. The rather harmonic situation is enhanced by lack of an opposition party which would use the crisis for political gains.

Switzerland has little tradition of parliamentary opposition, and some representatives say it is unbecoming to criticize the government right now. Most parties agree that confidence in authority is the imperative of the hour, and any critique can wait until after the crisis.

Pragmatic solutions have replaced ideological disputes. At least for the time being, populist rhetoric and political attacks have given way to a rare effort to achieve unity and solidarity.