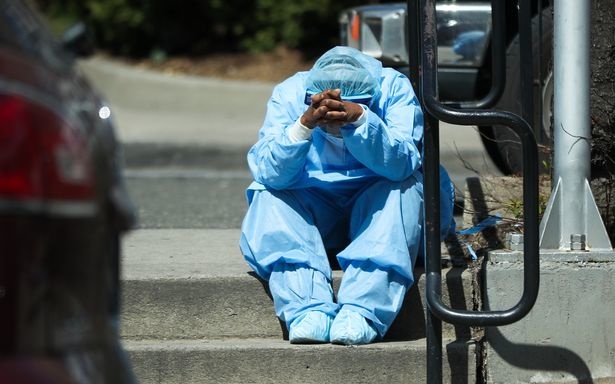 An exhausted medic at a New York City hospital (Anadolu/Getty)

Donald Trump has said he will not assure New York State, the epicenter of the US coronavirus crisis, of ventilators to save lives.

Trump said during the White House press briefing on Friday:

We are trying to do — we are doing our best for New York…[But it is] well served with ventilators. We’re going to find out, but we have other states to take care of.

Trump tried to pin blame on Governor Andrew Cuomo, who has been praising for his handling of the crisis, with the unsupported claim, “I wish they did the original orders three years ago. They would have had all the ventilators they needed although, even then, they wouldn’t.”

Amid the rapid spread of Coronavirus in the US and critical shortages of medical equipment and supplies, New York City Mayor Bill de Blasio says Sunday is “D-Day”.

Meanwhile, the US death toll rises by more than 1,000 for the third day in a row. There have now been 7,152 fatalities.

Amid the lack of action and coordination by the Federal Government, areas such as New York have desperately sought specialist masks, personal protective equipment, and life-saving ventilators.

Hospitals are filled to breaking point, even with the dispatch of a US Navy floating hospital, the USS Comfort, to New York Harbor and the opening of a treatment facility in the Jacob Javits Convention Center.

The city’s recorded its highest daily death toll on Friday, with an increase of 305 to 1,867. There are now 57,159 confirmed cases, a rise of 6,582 in 24 hours. More than half of hospital capacity, which was about 20,000 beds before the crisis, is occupied with Coronavirus patients.

De Blasio said a minimum of 2,500 to 3,000 ventilators will be needed just to get through the weekend, with 5,000 patients intubated by early next week.

The mayor noted that he requested 1,000 nurses, 150 doctors, and 300 respiratory therapists from the Trump Administration more than a week ago, but that the request is only now being handled.

De Blasio said that, beyond Monday or Tuesday, “we don’t know” if the city has the resources to cope.

See also EA on talkRADIO: Coronavirus — Economic Shock in the US

On Friday, Cuomo said he will sign an executive order allowing the National Guard to take ventilators and personal protective equipment from institutions where they are not needed.

“Am I willing to deploy the national guard and inconvenience people for several hundred lives? You’re damn right I am,” the Governor said.

Amid National Crisis, Kushner and Trump Lie About “Our” Stockpile

De Blasio noted that the critical point is not just in his city:

And unless the military is fully mobilized and we create something we’ve never had before, which is some kind of national enlistment of medical personnel moved to the most urgent needs in the country constantly….If we don’t have that, we’re going to see hospitals simply unable to handle so many people who could be saved.

State and local leaders from Connecticut to Louisiana to Illinois have said their medical facilities will be at capacity by next week, with shortages of ventilators costing lives and with medical staff threatened by the lack of protective equipment.

The Strategic National Stockpile is now almost exhausted. But the Trump Administration has washed its hands of the crisis, saying that it is up to Governors to obtain the vital supplies.

On Friday, the Department of Health and Human Services altered the Stockpile’s website to cover a lie by Trump’s son-in-law Jared Kushner, while Trump angrily dismissed a question by a journalist.

In fact, according to its website, the Stockpile is:

The nation’s largest supply of life-saving pharmaceuticals and medical supplies for use in a public health emergency severe enough to cause local supplies to run out. When state, local, tribal, and territorial responders request federal assistance to support their response efforts, the stockpile ensures that the right medicines and supplies get to those who need them most during an emergency.

After Kushner’s deception, HHS altered the site so the Stockpile is “to supplement state and local supplies during public health emergencies. Many states have products stockpiled, as well.”

The original version vs the Kushner version. pic.twitter.com/tnKNGku5fn

At the White House briefing, Trump was asked what his son-in-law’s meant by “our stockpile”, rather than a stockpile for the states. He replied:

Why are you asking me that? What’s that, a gotcha [question]? A gotcha?….

You ought to be ashamed of yourself.

WATCH: @weijia presses President Trump on Jared Kushner's comment that the federal stockpile is not meant for states https://t.co/b9FtmY5sM4 pic.twitter.com/IWfuxXPb7Q