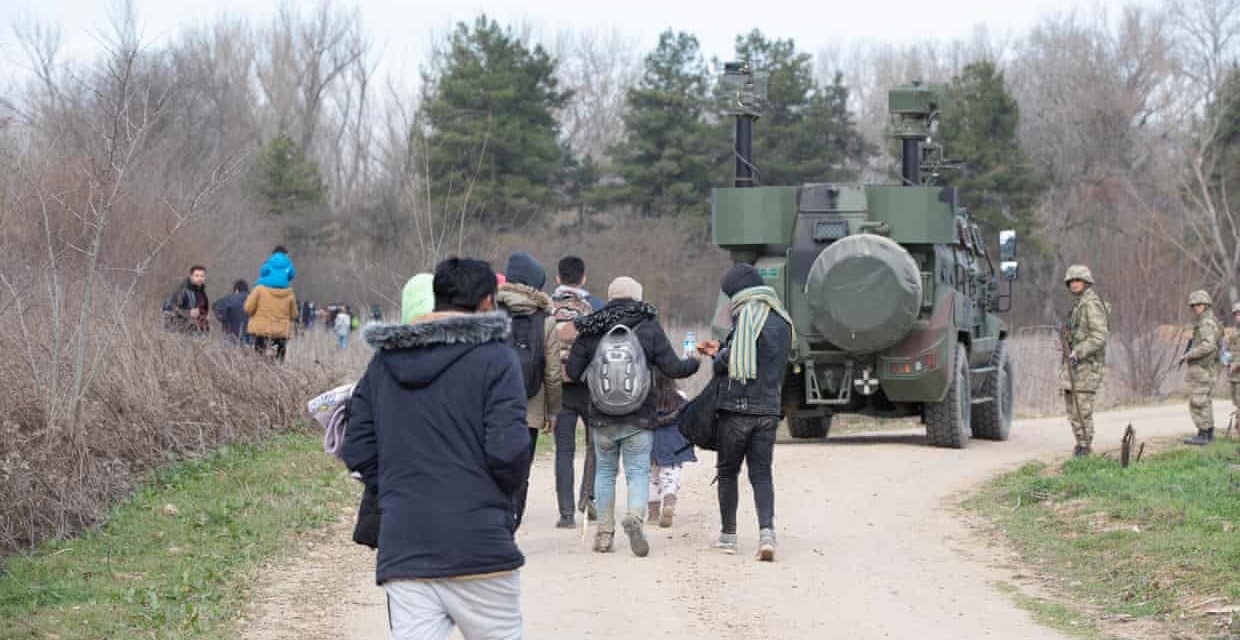 A day after Thursday’s agreement between Turkish President Recep Tayyip Erdoğan and Russian counterpart Vladimir Putin for a ceasefire, Ankara has lifted its criticism of the 10-month Russian-regime offensive that killed almost 2,000 civilians, wounded thousands, and displaced more than a million. Erdoğan no longer speaks of his February 29 deadline for regime forces to withdraw from Idlib.

Instead, the Erdoğan Government has shifted its pressure to Europe, encouraging the exit of some of the 3.6 million Syrian refugees in Turkey. The Foreign Ministry said late Friday:

The European Union should fully implement the March 18 [2016] Agreement. All EU countries, including Greece, should accept their responsibilities stemming from international law and receive asylum applications….

It is clear that the EU has failed to grasp the extraordinary burden Turkey faces and the efforts it makes regarding the migration and security issues.

Under the March 2016 agreement, the EU accelerated the allocation of €3 billion ($3.3 billion) in funds to assist refugees in Turkey. Ankara agreed to prevent the departure of any refugees to EU countries.

Turkey soon closed its border to any more entries from Syria. That has effectively trapped the more than 1 million displaced by the Russian-regime offensive that began late April.

Concerned about the pressure of the refugees moving towards the border, many of them without shelter, Erdoğan issued his demand for regime withdrawal and began criticizing Russia by name, seeking Moscow’s detachment from Damascus.

After 36 Turkish soldiers were killed on February 27 by a Russian or regime strike, Ankara attacked hundreds of pro-Assad targets and enabled a rebel advance in southern Idlib. But a show of force by Moscow, ensuring the pro-Assad takeover of the key city of Saraqib on Monday, pushed Erdoğan into accepting the division of Idlib.

Joint Russian-Turkish patrols will begin from March 15 in a 12-km (7.5-mile) corridor along the M4 highway. Meanwhile, the more than 1 million displaced — among about 3 million people in the greater Idlib area — will be in the half of Idlib that is still opposition territory.

Targeting Greece and the EU

The Turkish Foreign Ministry issued no comment about the situation in Idlib after the Erdoğan-Putin deal, continuing its complaints about Europe: “Greece has announced that it has suspended asylum processes. The EU is turning a blind eye to violation of EU and international laws.”

On February 28, as it attacked pro-Assad targets, Ankara also encouraged Syrian refugees to go to the Greek border, moving them at little or no cost from cities such as Istanbul and Ankara.

But Greek border police have blocked entry by land or sea. They have fired tear gas and stun grenades, and one refugee has been killed.

Erdoğan pressed his case in a meeting with German Chancellor Angela Merkel on Thursday and will go to Brussels on Monday.

The US blocked the adoption of a UN Security Council statement on Friday endorsing the deal for ceasefire and partition.

“It’s premature,” the American delegation said of a Russian resolution.

The UK supported the American position. “There are a lot of questions about how it will work in practice, who will monitor it, what is happening west of Aleppo and critically has the Syrian government formally signed up?” said Ambassador Karen Pierce.

German counterpart Christoph Heusgen added, “We have to see if this will work. We are concerned about the millions of people who are suffering there and we would (like to) see that this ceasefire leads to a kind of safe zones where people can go back to and they can survive.”

Russia threatened to retaliate by opposing Security Council endorsement of last week’s agreement between the US and the Taliban, moving towards talks in Afghanistan for a resolution of the 18 1/2-year conflict and for withdrawal of American forces.