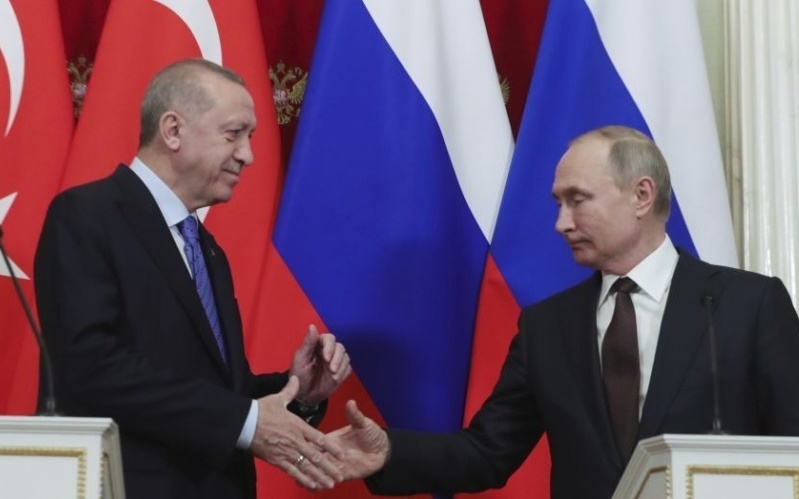 Among the victims of the assault were a mother and her five children, including a 3-month-old infant.

A terrible and very sad day for humanity. Whole families were killed while sleeping by deliberate Russian bombing. Our #WhiteHelmets tried with all their energy to rescue everyone alive but the mountains of rubble and double raids prevented that. 16 souls were lost at dawn today. pic.twitter.com/rwRYRMn6Fm

The site’s top story is an opinion piece by Scott Ritter, the former arms inspector who is now a pro-Assad denier of regime attacks on Syrian civilians, “New Putin-Erdogan Deal is Sugar-Coating the Turks’ Surrender“.

As far as efforts to eliminate militants and terrorists go, if they are designated as such, they must be eradicated, first and foremost, by the Syrian Armed Forces and the forces of countries that legally cooperate with the Syrian authorities.

The statement rejected the Turkish line that it “will eliminate terrorists in Idlib on its own”.

Turkey and Russia have agreed a ceasefire and an effective partition of Idlib Province in Syria, rewarding Moscow and the Assad regime for a 10-month offensive that killed almost 2,000 civilians and displaced more than a million.

The arrangement allows Russia and the regime to reoccupy the Damascus-to-Aleppo M5 and cross-Idlib highways, as well as almost all of northern Hama Province and part of southern Idlib.

The offensive seized the territory as it broke a September 2018 “de-escalation zone” declared by Erdoğan and Putin.

Ankara had raised the prospect of a counter-attack pushing back the Russian-regime offensive. The Turkish President had set a February 29 deadline for withdrawal of regime forces from Idlib. The military struck hundreds of pro-Assad targets since last Friday, after a Russian or regime strike killed 36 Turkish soldiers on February 27.

Turkey also enabled rebels to reclaim the key town of Saraqib, at the junction of the M5 and M4 highways. But to assure a position of strength in Thursday’s talks, Russia ensured that pro-Assad forces occupied the town on Monday, with Russian mercenaries alongside Hezbollah and Iranian-led foreign militia as well as regime troops.

See also The Reality of Syria: No One “Wins”

1 Million+ Displaced in a Split Province

A pleased Putin said on Thursday alongside Erdoğan, “I express hope that these agreements will serve as a good basis for a cessation of military activity in the Idlib de-escalation zone (and) stop the suffering of the peaceful population and the growing humanitarian crisis.”

Moscow had denied that the offensive was causing a “humanatarian crisis”, denying that any of the more than 1 million displaced were fleeing its attacks.

Those displaced are now in the remaining half of Idlib held by the opposition and overseen by the Turkish military. Turkey, which hosts more than 3.6 million Syrian refugees, closed its border in 2016.

Rather than take in more, Ankara has been encouraging Syrians in Turkey to exit the country. The step has led to tension the Greek border, with Greece’s security forces blocking entry by the refugees.

Erdoğan said Thursday, “We will work together to supply aid for the Syrians in need.” He maintained a show of resistance to the regime, despite his defunct deadline for withdrawal from Idlib: “[We will] respond to all regime attacks in the field.”

Russia and Turkey will now patrol a corridor, 6 km to the north and 6 km to the south, along the M4 highway from March 15.