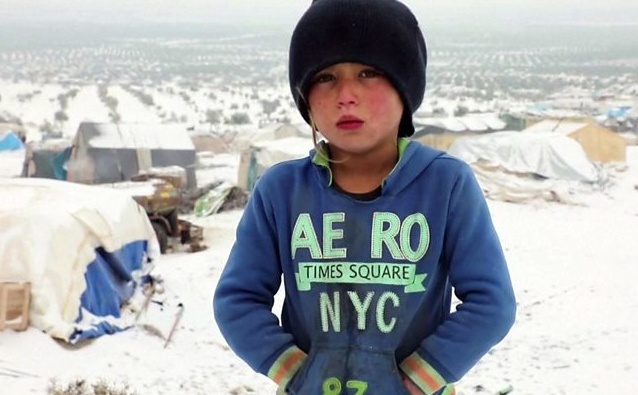 A displaced child in a camp in Idlib Province in northwest Syria, February 2020

The UN head of humanitarian operations, Mark Lowcock, has warned that the Russian-regime offensive on Idlib Province in northwest Syria could bring the “biggest humanitarian horror story of the 21st Century”.

Lowcock issued a statement on Monday as the UN raised its estimate of those displaced by the offensive to 900,000 since late December, the vast majority of them women and children.

They are traumatized and forced to sleep outside in freezing temperatures because camps are full. Mothers burn plastic to keep children warm. Babies and small children are dying because of the cold.

Without referring to Russia or the Assad regime by name, the Undersecretary General explained:

The violence in northwest Syria is indiscriminate. Health facilities, schools, residential areas, mosques and markets have been hit. Schools are suspended, many health facilities have closed. There is a serious risk of disease outbreaks. Basic infrastructure is falling apart.

We are now receiving reports that settlements for displaced people are being hit, resulting in deaths, injuries and further displacement.

The offensive, which began in late April, has brought an estimated 1.3 million displacements among the greater Idlib area’s more than 3 million people, about 20% of Syria’s remaining population.

More than 1,800 civilians have been killed and thousands wounded.

The offensive has seized almost all of northern Hama Province and part of southern Idlib. Two weeks ago, it occupied the key town of Saraqeb, last week it established control of all of the M5 Damascus-to-Aleppo highway.

Since then, Russia has checked its operations as Turkish President Recep Tayyip Erdoğan has demanded the withdrawal of Assad regime forces by the end of February. But a Russia-enabled advance of pro-Assad forces has continued in neighboring western Aleppo Province.

Lowcock wrote yesterday that a “huge relief operation” from Turkey has been “overwhelmed”, including by Russia-regime attacks which have damaged equipment and killed aid workers.

He called for a ceasefire, avoiding the “horror story” only if “Security Council members, and those with influence, overcome individual interests and put a collective stake in humanity first”.

But the aid head offered no idea on how to achieve this, given Russia’s paralysis of the Security Council with its vetoes and no other power besides Turkey considering intervention.

Turkey and Russia held a second set of talks this month, amid Erdoğan’s warning and Moscow’s refusal to end the offensive.

A statement from Turkey’s Foreign Ministry said only, “Our delegation underlined the need to defuse tensions on the field and to prevent the further worsening of the humanitarian situation. All measures to fully implement to Sochi deal and to prevent violations have been discussed.”

The Sochi agreement, between Erdoğan and Russian President Vladimir Putin in September 2018, established a de-escalation zone around Idlib and northern Hama. However, it was shattered by the Russian-regime offensive, with a ring of 12 Turkish observation posts surrounded, occasionally shelled, and rendered ineffective.

Ankara extended its warning to Aleppo Province on Monday, after the Assad regime claimed the seizure of 30 villages north and west of Aleppo city.

Daily Sabah, close to the Erdoğan Government, asserted that Turkish reinforcements have “virtually built a barricade of steel in an area of 60 kilometers…to stop the advancement of the Assad regime”.

A well-placed local source told EA WorldView on Monday that Turkey may now have to draw a military line with Russia, 3 1/2 years after Erdoğan reconciled with Putin and more than two years after the two countries, along with Iran, launched their Astana process.

He cited Ankara’s primary concern that, hosting more than 3.6 million Syrian refugees, it cannot face another mass influx from Idlib.

This time I think that just because Turkey can’t take in more refugees, it will threaten Russia to a point they will call Putin’s bluff.

Bullying works only as long as the bullied party has ways to retreat. This time Turkey has no other choice than to confront Russia if Putin continues.

The analyst said that Turkey has the capability to punish the Russians, given Moscow’s lengthy supply routes, Ankara’s ability to jam Russian air defenses.

If Turkey decides to apply force, Russian presence in the Middle East is toast.