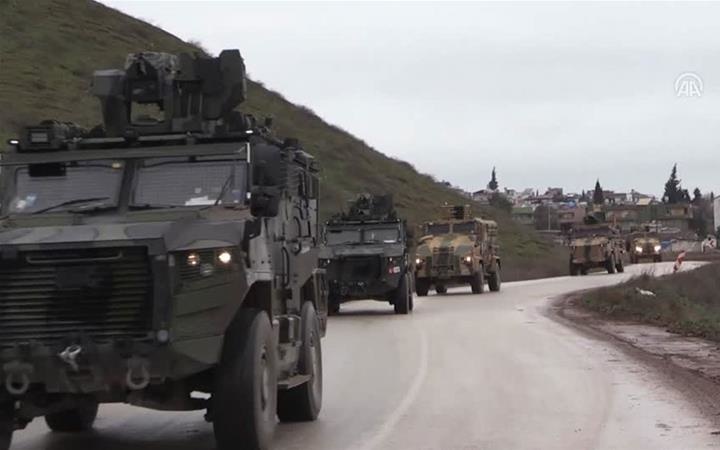 Turkey has bolstered its remaining military positions in Idlib Province in northwest Syria, amid a Russia-regime offensive that has taken part of the area and killed, wounded, or displaced more than 800,000 civilians.

The Erdoğan Government dispatched almost 150 vehicles with commandos and ammunition to reinforce 12 observation posts around Idlib and northern Hama, part of a now-shattered September 2018 agreement with Russia for a de-escalation zone.

The convoy is the second in a week amid the latest Russian-regime attacks on civilian areas and frontlines. The offensive, which began in late April, has taken almost all of northern Hama and part of southern Idlib and surrounded nine of the 12 Turkish observation posts.

In the past 10 days, President Recep Tayyip Erdoğan has stepped up his rhetoric, criticizing Russia by name for the first time and demanding the withdrawal of pro-Assad forces from Idlib.

But while Turkey has covertly provided weapons and ammunition to anti-Assad forces, according to well-placed local sources, but has made no overt intervention to check the Russian-regime assault.

However, it was unable to stop the Russian-regime offensive moving into the town on Thursday. Saraqeb’s position is vital, as it is on the junction of the M5 highway, from Damascus to Aleppo, and the M4 highway across Idlib. Activists say the town was also prominent as an “island” of opposition challenging both the Assad regime and the hardline jihadist bloc Hay’at Tahrir al-Sham.

Local sources reported that an anti-Assad counter-attack freed the remaining rebels from the town on Friday.

Turkish Foreign Minister Mevlüt Çavuşoğlu announced on Friday that the discussions with the Russians will begin today, with Ankara trying to detach Moscow from the offensive and the Assad regime.

“A delegation from Russia will arrive in Turkey. We will hold talks. Our goal is to stop the regime’s aggression and move the political process forward,” Çavuşoğlu said.

In his series of statements, Erdoğan has maneuvered between warnings of Turkish military intervention, demands for regime withdrawal, and appeals to Russia to halt the offensive.

He began at the end of January by chiding Moscow, “We have waited until now, but from this point, we are going to take our own actions,” and saying that the Astana process — political talks between Russia, Turkey, and Iran — was suspended.

On Tuesday, he struck a conciliatory tone, “We will discuss everything, but not with anger.”

A day later, he invoked his September 2018 agreement with Russian President Vladimir Putin for the de-escalation zone and said:

We hope that the regime’s process of pulling back behind our observation posts will have been completed within the month of February. Unless the regime pulls back within this period of time, Turkey itself will have to take over the matter.

On Friday, Çavuşoğlu held up Erdoğan’s concern over the more than 800,000 civilians displaced by the offensive.

Turkey, which hosts more than 3.6 million Syrian refugees, closed its border in 2016 and is refusing to take any more fleeing civilians.

Erdoğan said on Wednesday, “The number of people who started to move from Idlib towards the regions we control and our border has reached one million. No one has the right to lay such a burden on our shoulders.”