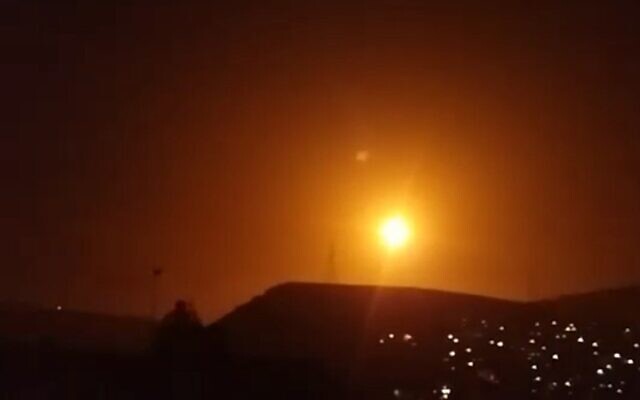 An Iranian passenger jet narrowly escaped crashing in Syria when it was fired upon by Assad regime forces.

The Airbus A320 airliner with 172 passengers was flying from Tehran to Damascus and preparing to land just after 2 a.m. on Thursday. Meanwhile, according to the Russian Defense Ministry, four Israeli F-16 fighter jets fired eight air-to-ground missiles upon pro-Assad positions in the the suburbs of the Syrian capital.

Even though the Israeli jets were outside Syrian airspace when they launched the missiles, Assad regime air defenses fired into the air, almost hitting the Iranian jet.

The flight made an emergency landing in Russia’s Khmeimim air base in western Syria after it was escorted away from Damascus, according to Defense Ministry spokesman Igor Konanshenkov.

He insisted, “The Israeli general staff’s use of passenger jets as a cover for its military operations or as a shield from Syrian missile system fire is becoming a typical trait of the Israeli air force.”

The Israeli targets reportedly included the al-Kiswah base near Damascus, a key site for Iranian operations in support of the Assad regime. Israel Defense Forces spokesperson Hidai Zilberman said he was aware of the “foreign reports” about the airstrikes but declined to comment in line with IDF policy.

According to SANA, the Israeli strikes targeted the al-Kiswah district — an area outside of Damascus that Israel has acknowledged striking in the past due to its use as an Iranian base of operations — as well as Marj al-Sultan and Jisr Baghdad.

In total, at least three government and Iranian positions near Damascus and west of the capital were targeted, according to the Syrian Observatory for Human Rights (SOHR), which said a fire broke out in one of the areas.

Amid periodic Israeli attacks on positions of the Assad regime, Iran, and Hezbollah in Syria, the regime’s air defense systems have only downed one Israeli warplane. The F-16 crashed in northern Israel in February 2018 after hitting the T-4 airbase, including Iranian personnel, in central Syria.

In September 2018, regime anti-aircraft fire downed a Russian surveillance plane monitoring Israeli attacks. The Il-20 crashed into the Mediterranean, killing all 15 personnel aboard.