Iran Daily: Israeli F-16 Shot Down Amid Attacks on “Iranian Targets” in Syria 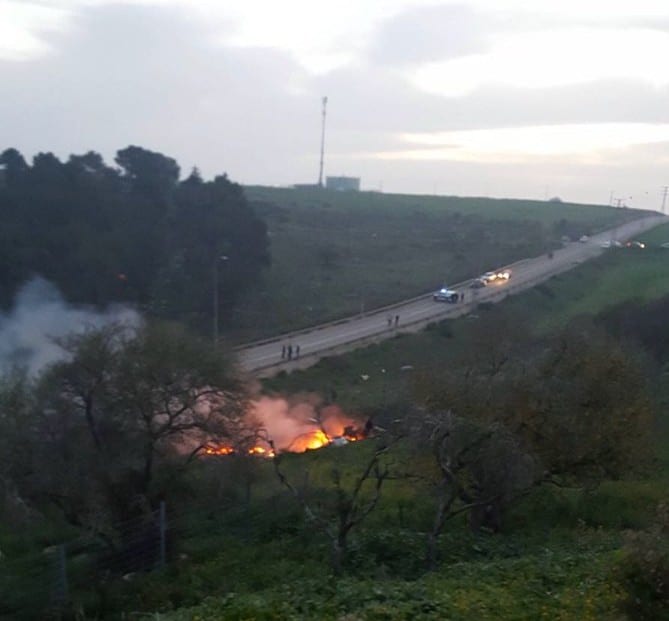 The remains of #Syria'n S-125 ground to air rocket that shot down an #Israel'i F-16 plane pic.twitter.com/2twKzbpI4v

UPDATE 1245 GMT: The Assad regime and Iran have each denied that an Iranian drone entered Israeli airspace, the cited cause for Israel’s attacks on regime and Iranian positions inside Syria early Saturday.

The regime’s Central Military Media said the Israeli strikes, including an attack on the Iranian control station for the drone in Homs Province in central Syria, was a “terrorist act” and warned of “a tough and serious response”.

The statement said the station was hit while drones were on regular missions in the desert in the province.

Iranian Foreign Ministry spokesman Bahram Qassemi said, “Claims about the flight of an Iranian drone…are too ridiculous to be addressed because the Islamic Republic of Iran has advisory presence in Syria at the request of the country’s legitimate and lawful government.”

The Israel Defense Forces posted footage of the interception of the drone:

Original footage showing #Iranian UAV infiltrating and then shot down over Israel, and #IDF strike on Iranian command vehicle in #Syria pic.twitter.com/Sz6poAOdjc

A spokesman for Iran’s Supreme National Security Council said the regime response to Israel’s air force was “a clear warning to Israel. The era of Israeli strikes on Syria is over.” He vowed a “relentless response” to “all further aggression”.

The deputy chief of the Revolutionary Guards, Brigadier General Hossein Salami, said Iran will “bring hell upon the Zionist regime“.

UPDATE 1025 GMT: The Israel Defense Forces say they have carried out “large-scale attacks”, following their initial strike on an Iranian facility in central Syria and the Assad regime’s claim that it downed an Israeli F-16 warplane.

The IDF said it hit 12 additional targets, including three aerial defense batteries and four Iranian positions “that are part of Iran’s military establishment in Syria”.

Residents said the sounds of explosions could be heard to the south and west of Damascus. Six missiles reportedly fell near the Presidential Palace in southern Damascus.

IDF spokesman Jonathan Conricus said, “Syrians and Iranians are playing with fire. We are willing to extract a heavy price on anyone who attacks us.” However, he said the IDF is “not interested in escalating the situation”.

Israel has attacked “Iranian control systems” in Syria after intercepting a drone that entered Israeli airspace.

The Israel Defense Forces said the drone was downed early Saturday. The IDF then responded, according to a spokesman, with the attacks inside Syria:

IDF has targeted the Iranian control systems in Syria that sent the #UAV into Israeli airspace. Massive Syrian Anti-Air fire, one F16 crashed in Israel, pilots safe. #Iran is responsible for this severe violation of Israeli sovereignty. Event ongoing, more to follow.

The IDF said the drone approach at around 4 am, setting off alarms near the Sea of Galilee. An Apache helicopter shot it down, and the army said it has the remains.

The IDF said it attacked the drone’s launch site, the Tiyas Military Airbase near Palmyra in central Syria, in “a complicated surgical strike” which targeted a facility housing the unmanned aircraft’s Iranian operators.

The military added that the downed Israeli F-16 jet had been targeted by anti-aircraft fire before it crashed. One pilot is in serious condition after ejecting, while another is lightly wounded.

Air raid sirens were set off in northern Israel as Assad regime forces fired anti-aircraft artillery. One of the missiles fell inside Israel, but caused no damage.

The Assad regime’s media, citing a military source, claimed that the crashed Israeli F-16 had been shot down by its air defenses: “The Israeli enemy entity at dawn today conducted a new aggression against one of the military bases in the central region. Our air defenses confronted it and hit more than one plane.”

Israeli officials, including Prime Minister Benjamin Netanyahu, have vowed that Iran and its ally, Lebanon’s Hezbollah, will not be allowed to establish positions near the Israeli-occupied Golan Heights.

The IDF has periodically attacked regime facilities, warehouses, and convoys inside Syria to disrupt the supply of weapons to Hezbollah and to keep Iranian-backed forces from assembling near the Israeli border.