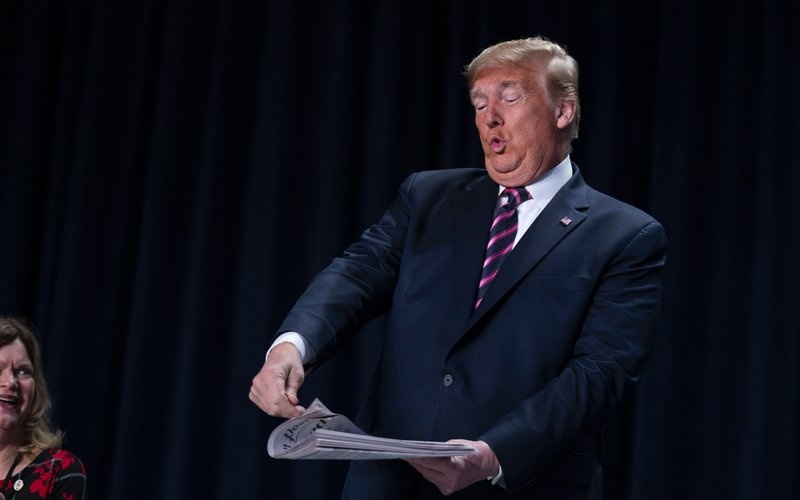 An angry and vindictive Donald Trump lies and insults others in an hour-long rant, only a day after Republican Senators shut down his impeachment trial over abuse of power.

Trump was supposed to celebrate Wednesday’s Senate vote, in which all but one GOP legislator pushed aside Trump’s pressure on Ukraine to investigate political rivals and cover up Russia’s interference in the 2016 US election.

But the historic decision of Sen. Mitt Romney of Utah, who joined Democrats in a vote to convict over abuse of power, overtook the Trump camp’s plans and sent Trump into fury.

At the National Prayer Breakfast and then in his White House statement, Trump flourished a newspaper headline, “Trump Acquitted”, but he immediately shifted to attack, instructing Utah’s other Republican senator, Mike Lee: “Tell [everyone in Utah] I’m sorry about Romney.”

Trump mocked the explanation of Romney, the 2012 Republican nominee for President, of a vote based on “a flagrant assault on our electoral rights, our national security interests and our fundamental values”, and “an inescapable conviction that my oath before God demanded it of me”.

You have some who used religion as a crutch….Never heard him use it before. But today, you know, it’s one of those things. But you know, it’s a failed presidential candidate. So things can happen when you fail so badly running for president.

Trump also lashed out at House Speaker Nancy Pelosi and Rep. Adam Schiff, the lead House manager in the trial:

As with Romney, he derided Pelosi’s religious faith: “When she said, ‘I pray for the President’….She doesn’t pray. She may pray but she prays for the opposite. But I doubt she prays at all.”

A Series of Lies

Trump peppered his rant with distortions and lies, beginning with his dismissal of the Mueller investigation into Russia’s interference in the 2016 election — which found substantial evidence of the Trump campaign’s links with Moscow’s efforts and Trump’s obstruction of justice — as “bullshit”.

He said, without evidence or coherence, that FBI personnel — “dirty cops” — conspired to stop him winning the election. He insisted that the effort began in June 2015, the day he announced his campaign. He said that he won the impeachment vote “197-0” in the House, which approved the charges in 230-197 and 229-198 counts.

He declared that former FBI Director James Comey — fired by Trump in May 2017 in an attempt to quash the Russia investigation — admitted to being a leaker in testimony at a Senate hearing.

In fact, Comey issued a blunt denial of the allegation.

At the end of his speech, Trump fired one more shot with his wife Melania and daughter Ivanka as stage props: “I want to apologize to my family for having them have to go through a phony, rotten deal by some very evil and sick people.”

Trump foreshadowed his statement by turning the National Prayer Breakfast into a platform for attack. He assailed “very dishonest” and “corrupt” opponents, and jabbed at Romney: “I don’t like people who use their faith as justification for doing what they know is wrong.”

The White House did not try to restrain Trump. Instead, they indicated that Thursday was just the beginning of an all-out assault for Trump’s re-election in November and for political retribution.

Press Secretary Stephanie Grisham said Democrats “should pay for” impeachment. Administration officials are pushing for an investigation of Joe Biden’s son Hunter, who was a board member on a Ukrainian gas company.

The 10-month campaign by Trump and his personal attorney Rudy Giuliani for Kyiv’s investigation of the Bidens sparked the formal complaint, by the CIA liaison with the White House on Ukraine, and then the impeachment hearings.

There is no evidence of illegal activity by Hunter Biden, or of the Trump-Giuliani conspiracy theory that Joe Biden obtained the firing of the Ukraine Prosecutor General to protect his son.

The Speaker praised Romney, “God bless him for his courage.” She said she would continue to work with the White House despite her “strained relationship” with Trump.

At the end of the Prayer Breakfast, Trump appeared to realize he may crossed a line with his verbal assaults.

But any reflection or filter was gone when he appeared in the White House: “It was evil, it was corrupt, it was dirty cops, it was leakers and liars, and this should never, ever happen to another president.”