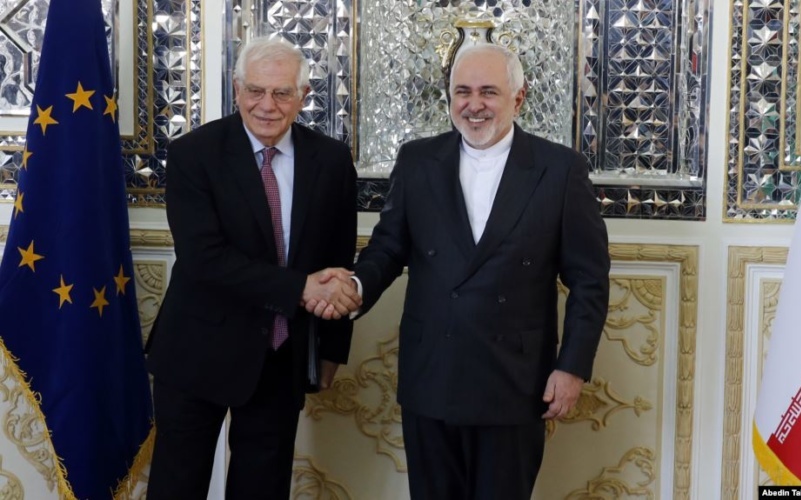 Borrell’s two-day visit comes after the UK, France, and Germany triggered a dispute mechanism last month over Iran’s over suspension of commitments under the agreement.

Rejecting a vital economic link with Europe and facing sanctions from the US, which left the deal in May 2018, Iran has increased its stock of 3.67% uranium, raised enrichment from 3.67% to 4.5%, and installed advanced uranium centrifuges capable of fast production of even higher levels.

Following the US assassination of its leading commander Maj. Gen. Qassem Soleimani on January 3, the Rouhani Government announced that it was suspending all commitments under the deal.

Rouhani Shifts Rhetoric: “We Are Ready to Work With EU”

Borrell’s office said the diplomat is trying “to de-escalate tensions and seek opportunities for political solutions to the current crisis”.

In a shift of rhetoric, Rouhani emphasized a return to the deal — if the US lifts sanctions:

On January 22, after the dispute mechanism was triggered, Rouhani warned the Europeans:

Do you want to make a mistake?…I emphasize to three European countries that if you violate a commitment, you are responsible for all its consequences.

See also Iran Daily, Jan 23: Rouhani to Europe — “Do You Want to Make a Mistake?”

Under the mechanism, the parties have 15 days to resolve the matter. The deadline can be extended up to 60 days; however, if there is still no return to the deal, then UN sanctions on Tehran automatically “snap back” into place.

In February 2019, the European Union launched the financial mechanism INSTEX, which would have bypassed US sanctions to ensure purchases of Iranian oil and other commodities and goods. Tehran rejected the economic link because of “humiliating conditions” such as the EU’s concern over Iran’s missile research and development, activities in the Middle East, and alleged involvement in bomb and assassination plots in Europe.

Rouhani added a veiled caution to Borrell on Monday, saying that Iran’s co-operation was conditional on no surge in tension: “The trend of [nuclear] inspections that has been carried out until today will continue, unless we face a new situation.”

He said a joint commission overseeing the deal will meet this month.