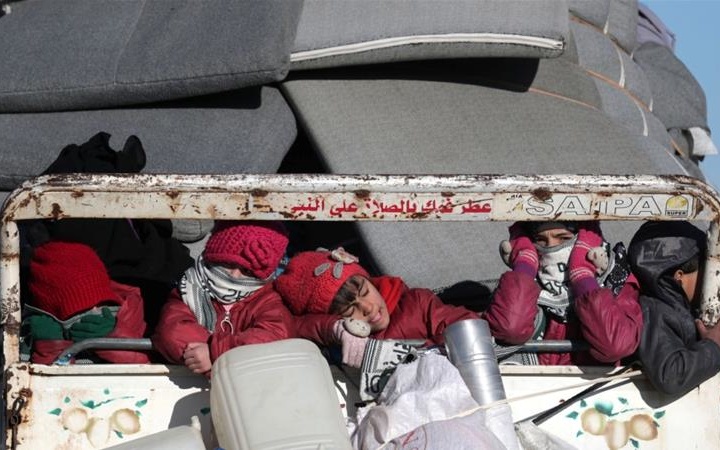 Tens of thousands of civilians are fleeing in the latest mass displacement in northwest Syria, trying to escape Russian-regime attacks and an advance near the “ghost city” of Ma’arat al-Nu’man.

The Russian-regime offensive closed on Ma’arat al-Nu’man, 32 km (21 miles) south of Idlib city, last month. More than 350,000 civilians, including almost all the population of the city, fled the area. The departure brought the total to more than 750,000 — with more than 1,500 killed and thousands wounded — since the Russian-regime assault on the greater Idlib area began in late April.

The advance has been renewed in the past week, with the occupation of a series of towns and villages. Pro-Assad forces have cut the M5 highway north of Ma’arat al-Nu’man and are now at the northeastern and eastern edges of the emptied city.

Fouad Sayed Issa, an aid worker with the Violet Organisation, said, “Over the past few days we have seen thousands of new internally-displaced persons. We are talking here at the very least about 50,000 over the past four days.”

Some civilians are moving southwest towards Kafrouma, seeking shelters in forests. Others are heading for the Turkish border.

Mass flights have also been reported from the towns of Ariha and Saraqib.

The civilians are effectively trapped in greater Idlib, which has a population of about 3 million — 20% of the remaining population in Syria. Turkey, which hosts more than 3.6 million Syrian refugees, closed the border in 2016.

Russia and the regime have occupied almost all of northern Hama Province and part of southern Idlib, which has been under opposition control since spring 2015.

UN officials have said the Russian-regime attacks are tantamount to a “war crime”, but the international community has been unable or unwilling to take any action.