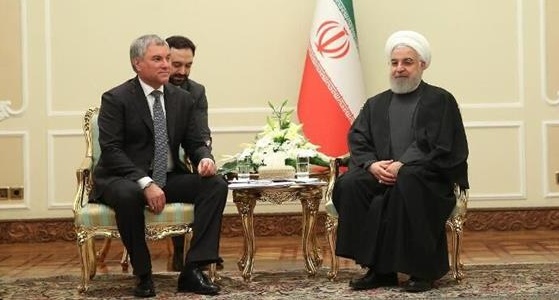 Under economic pressure and trying to recover after its downing of a Ukraine passenger jet, Iran plays up ties with Russia.

Coordinated stories across official and semi-official outlets headline Monday’s meeting between President Hassan Rouhani and the chair of Russia’s Duma, “Iran, Russia Boosting Ties Against US Will“.

Rouhani proclaimed alongside Vyacheslav Viktorovich Volodin, “I stand assured that in spite of Washington’s pressures on the region and Iran in particular, the two countries will expand their relations more than ever before regardless of the White House’s will and intention.”

The President also pointed to joint naval drills, as Iran asserts its control of the Persian Gulf, “Trilateral relations between Iran, Russia and China as well as joint maritime drills in the Sea of Oman indicate that the trio are bent on developing closer ties with each other.”

Alluding to Iran’s tenuous economic position amid long-term internal problems and US sanctions, Rouhani “expressed hope that the all the previous agreements between Tehran and Moscow for the promotion of joint investment will enter into force as soon as possible”.

Russia’s ability to prop up the Iranian economy, estimated to have contracted 9.5% in 2019, has been limited by Moscow’s own economic difficulties.

Iranian headlines have recurrently spoken of a loan of billions of dollars. Presenting the Government’s $37 billion budget in early December, Rouhani spoke of a Russian “investment”: “We hope that $5 billion in capital will enter the country, either through plans that have already been finalised or which will be finalised next year.”

But the “investment”, whether through funds or goods, has yet to materialize as the Government has faced mass protests over its sudden escalation of protest prices.

Earlier this month, more demonstrations were sparked by the Iranian military’s cover-up of its January 8 downing of Ukraine International Airlines Flight 752, killing 176 passengers — more than 100 of them Iranian citizens — and crew.

Volodin made no commitments in his published remarks, saying only, “Despite increased tensions in the region, we should work towards defusing tensions and expanding ties without allowing such tensions to drift us apart.”

He spoke of discussions in a joint economic commission which could include expansion of trade: “We believe that we can reach better conclusions through more meetings.”

Larijani: US Pushing for “International Dictatorship”

“Americans are pushing conditions in the region toward international dictatorship and behave in a humiliating manner, which makes cooperation between Iran and Russia even more important,” Larijani said.

He expressed gratitude for the Russian Duma’s sympathy after the US assassination of Maj. Gen. Qassem Soleimani on January 3, which set off a chain of events leading to the downing of the Ukrainian passenger jet five days later.

Larijani hailed “joint strides particularly in the fight against terrorism” and also referring to the tripartite naval drills.

He said of the joint economic committee, “We hope the convention of this commission at such a level that depicts the two sides’ will for developing ties, will further contribute to the consolidation of relations.”

Volodin again issued a vague reply, “Such interactions should help deepen ties between the two countries.”

He issued a far more significant statement at the joint committee, pointing to a free trade zone between Tehran and the Eurasian Economic Union founded by Russia, Kazakhstan, Belarus, and Armenia.

“Interim agreement that entered into force on Oct 27, leading to the creation of an FTZ between the #Eurasian Econ Union and Iran, should contribute to further growth of mutual trade. This is an important step towards concluding a full-fledged agreement on trade preferences, ” pic.twitter.com/WBHyEHPWQe