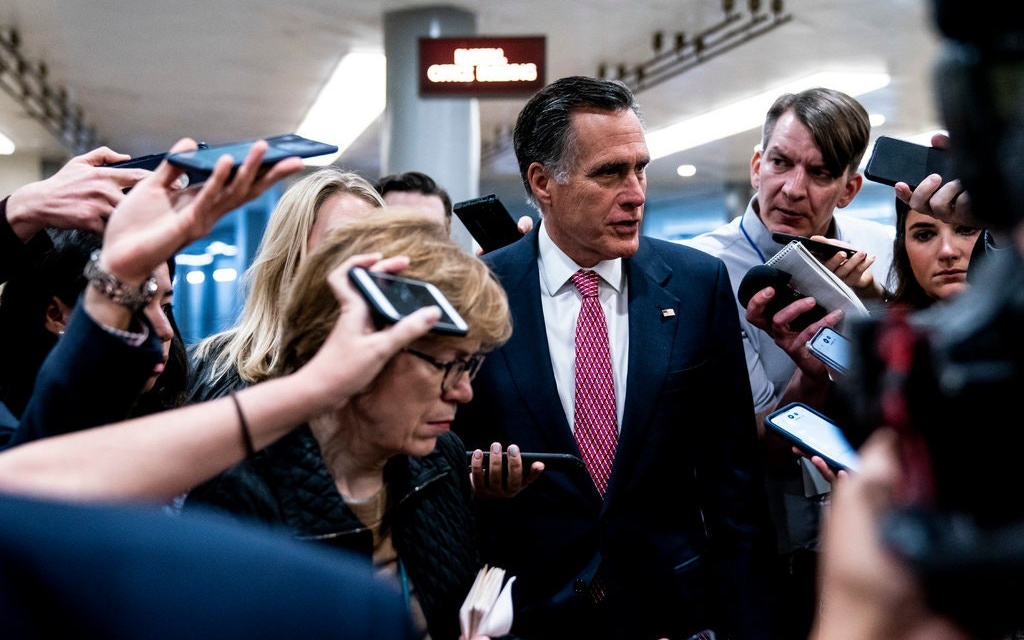 Sen. Mitt Romney: “I think it’s increasingly likely that other Republicans will join those of us who think we should hear from John Bolton”, US Capitol, January 27, 2020 (Anna Moneymaker/New York Times)

With ex-National Security Advisor John Bolton’s revelations threatening their hopes for a quick Senate trial, Donald Trump’s attorneys scramble for diversions in the second day of their presentation.

As expected, the White House and Trump defense team avoided the evidence of Trump’s pressure on Ukraine for investigations to tarnish Presidential candidate Joe Biden and to cover up Russia’s involvement in the 2016 US election.

Instead, they made the dubious legal claim that Trump’s abuse of power is not an impeachable offense, attacked Biden and his son Hunter, and distanced their client from his personal attorney Rudy Giuliani, who carried out Trump’s directive seeking the investigations.

But their assertions risked becoming a sideshow after extracts from Bolton’s forthcoming book gave a first-hand description of Trump freezing Ukraine’s security assistance until it complied with his demands.

The revelations unsettled the blockade, by the White House and Senate Majority Leader Mitch McConnell, of witnesses and documents in the trials. With defiance by four of 53 Republicans needed for the admission of testimony, several GOP Senators said they were favoring or leaning towards the assurance of a complete trial.

Mitt Romney of Utah, the 2012 Presidential nominee, said, “I think it’s increasingly likely that other Republicans will join those of us who think we should hear from John Bolton.” He later told colleagues at a closed-door lunch that permitting the witnesses is the wise choice politically and substantively.

Susan Collins of Maine said she favors the testimony and documents and Bolton’s details “strengthen the case for witnesses and have prompted a number of conversations among my colleagues”.

Lisa Murkowski of Alaska, who has previously said she is considering witnesses, said she is “curious” about what Bolton would say without indicating how she will vote at the end of the week. Lamar Alexander of Tennessee said he is listening carefully to presentations by the House managers and Trump’s attorneys before making a decision.

Trump loyalists tried to brush aside Bolton, who was dismissed by Trump in September. Ted Cruz of Texas, distorting the evidence in House hearings from 17 current and former US officials, insisted, “At the end of the day, it doesn’t impact the legal issue before the Senate. The legal issue before this Senate is whether a president has the authority to investigate corruption.”

“It is nothing different from what we have already heard,” said Majority Whip John Cornyn of Texas.

McConnell told GOP senators at the closed-door lunch to “take a breath”. But in public, he did not reiterate his firm line against witnesses and documents.

Other Republicans fell back on the path of a witness swap, allowing them to call the Bidens in an attempt to shift attention and blame.

“If we get to witnesses, it will be a one-for-one or a two-for-two,” asserted Mike Braun of Indiana.

Trump’s lawyers only briefly alluded to Bolton. Jay Sekulow tried to bury the former advisor’s account, which set out Trump’s freeze of the $391 million in security assistance and his rejection of appeals by Bolton, Defense Secretary Mark Esper, and Secretary of State Mike Pompeo.

We deal with transcript evidence, we deal with publicly available information. We do not deal with speculation, allegations that are not based on evidentiary standards at all.

Alan Dershowitz defied the portrayal of abuse of power: “Nothing in the Bolton revelations, even if true, would rise to the level of an abuse of power, or an impeachable offense.”

Throughout their eight hours on Monday, Trump’s attorneys decried the impeachment process and sought other defendants.

Dershowitz tried the line that abuse of power is not impeachable, contradicting the evaluation of most legal analysts and Presidential history — Andrew Johnson was tried for abuse of power, it was in the articles of impeachment of Bill Clinton, and it was in the draft articles for Richard Nixon before he resigned.

He said impeachment is for “criminal-like behavior” amd maintained — against the words of Alexander Hamilton, who explicitly said the process covered “abuse” of office by the President — that America’s founders “would have explicitly rejected such vague terms as ‘abuse of power’ and ‘obstruction of Congress’ as among the enumerated and defined criteria”.

Pam Bondi recycled discredited conspiracy theories about Joe Biden and his son Hunter, a board member with the Ukrainian gas company Burisma.

Bondi held up the false claim that the elder Biden obtained the dismissal of Ukraine Prosecutor General Viktor Shokin in March 2016 to protect his son and Burisma from investigation: “[Joe] Biden went around bragging that he stopped the prosecution so if you can look into it….It sounds horrible to me.”

In fact, Biden never intervened over his son’s work — the then-Vice President was representing the Obama Administration in its anti-corruption efforts in Ukraine — and the file on Burisma had been closed in 2015. Shokin was dismissed by the Ukraine Parliament in March 2016 over his failure to investigate corruption.

Jane Raskin tried to separate Trump from Rudy Giuliani and the 10-month campaign, from November 2018 to September 2019, for the investigations.

“In this trial, in this moment, Mr. Giuliani is just a minor player — that shiny object designed to distract you,” she declared.

On the eve of the trial, documents and statements from Giuliani’s associate Lev Parnas laid out the Trump-Giuliani campaign, with Parnas — the point man in contacts with former and current Ukrainian officials — saying his efforts and those of Giuliani were at Trump’s direction.

On Sunday, just before the Bolton story broke, headlines featured an audio in which Trump — who says he doesn’t know Parnas — and the Soviet-born, Florida-based businessman discussed the removal of US Ambassador to Ukraine Marie Yovanovitch.

The Trump-Giuliani campaign subsequently spread disinformation to undermine Yovanovitch, a leading diplomat in anti-corruption efforts, and Trump recalled her from Kyiv in April 2019.