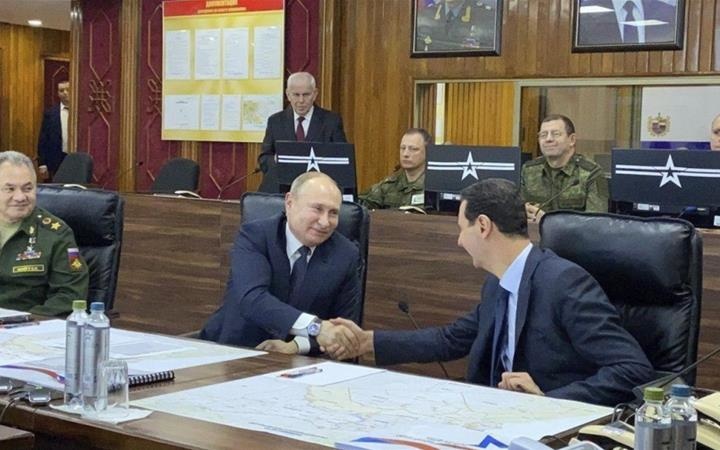 The trip was only Putin’s second to the country and first to Damascus since Russia’s military intervention in September 2015 saved the Assad regime.

Putin’s mission continued a flurry of discussions before and after last Friday’s US assassination of Iranian commander Qassem Soleimani, who oversaw Tehran’s support for Assad in the 105-month Syrian conflict.

No details have been given of any of the talks. Assad’s office said yesterday that he and Putin listened to a presentation by the commander of Russian forces in Syria.

Kremlin spokesman Dmitry Peskov told Russian news agencies that Putin saw Assad at a base near Damascus after a drive through the capital:

In his conversation with Assad, Putin noted that we can now say with confidence that a huge distance has been travelled towards restoring Syrian statehood and the country’s territorial integrity.

Putin also noted that on the streets of Damascus, the signs of how peace has been restored can be seen with the naked eye.

There was no comment on the future of the Russian-regime offensive in northwest Syria against the last major opposition area of the country.

The attacks on the greater Idlib area have killed more than 1,100 civilians, wounded thousands, and displaced more than 600,000 since late April. Russian and regime forces have seized almost all of northern Hama and part of southern Idlib Provinces, but have held up their advance since late December.

Peskov said, “The Syrian President expressed appreciation for the help of Russia and the Russian military in the fight against terrorism and the restoration of peaceful life in Syria.”

No mention was made of the stalled process for a Syrian Constitutional Committee, Russia’s headline political process for the conflict.

After almost two years, meetings of the 150-member committee were finally convened by the UN. However, they failed to make progress amid the Assad regime’s demands for a focus on “terrorism”.

Putin’s last visit to Syria was in December 2017, meeting Assad at the Russian base of Hmeimim on the Mediterranean coast.

The Russian President continues his maneuvers on Wednesday with a meeting with Turkish counterpart Recep Tayyip Erdoğan.

The two men are inaugurating a gas pipeline. However, talks are likely to be on Idlib, where the Russian-regime offensive has shattered a de-escalation zone announced by Ankara and Moscow in September 2018.

Erdoğan is also likely to raise the issue of northeast Syria, where a Turkish offensive across two Kurdish cantons has seized a strip of territory. The Turkish President is seeking to resettle 1 million of the 3.6 million Syrian refugees in Turkey, in an area 480 km (270 miles) long and 30 km (19 miles) deep.

In late October, two weeks after the Turkish cross-border offensive was launched, Erdoğan and Putin declared joint military oversight of the area.