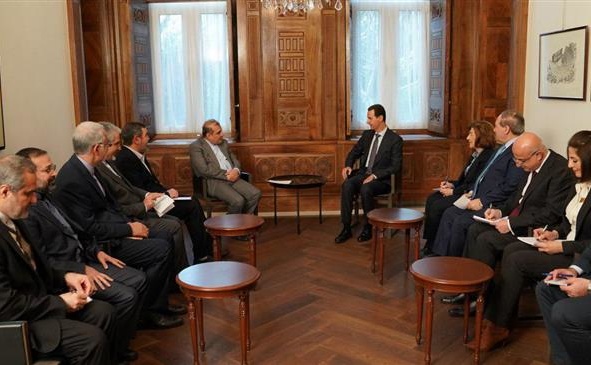 Amid the Russia-regime offensive in northwest Syria, Bashar al-Assad has met officials from his other essential backer, Iran.

Syrian State news agency SANA put out a template summary of Assad declaring that the offensive, which has killed more than 1,100 civilians and displaced more than 600,000 in the greater Idlib area, is necessary to “eliminate terrorism”.

Iran’s military support has propped up the Assad regime since 2012, and Tehran-backed militias led other offensives occupying opposition territory. However, the Islamic Republic has been marginal in the Idlib offensive, with Russian airstrikes and special forces enabling the regime to seize almost all of northern Hama Province and part of southern Idlib.

Assad used the meeting to pour cold water on the UN-brokered effort for a Constitutional Committee and a path to political resolution of the 105-month conflict. He said the committee was being obstructed by the “other side” — delegates from some opposition factions and civil society groups — and “the states that support” them.

After almost two years, the 150-member Committee was finally convened this autumn by UN envoy Geir Pedersen. However, with Assad insisting on regaining “every inch” of Syria and the regime’s focus on “terrorism”, there was no progress.

The SANA account, echoed by Iran State outlet Press TV, made no reference to Sunday’s US airstrikes on the Iran-backed militia Kata’ib Hezbollah in Syria and Iraq or to the response by militia supporters who occupied the US Embassy in Baghdad on Tuesday.

Iran’s Khaji said, “We have become accustomed to bloody US messages, the last of which was the aggression against the Iraqi and Syrian territories.”