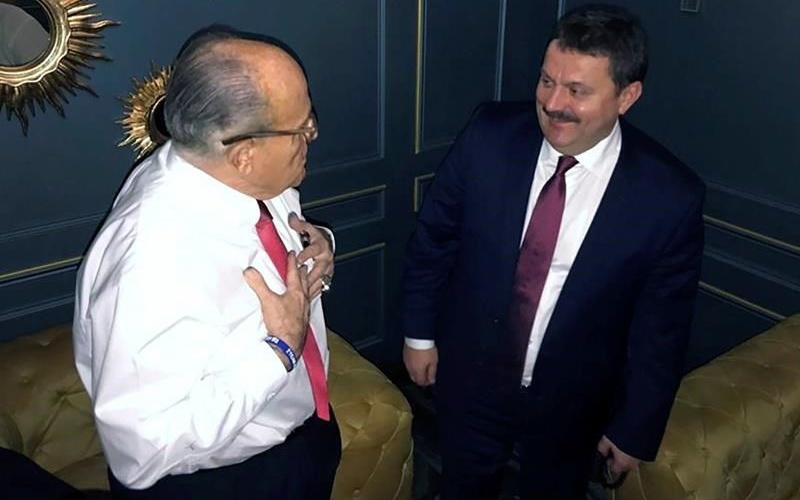 Thumbing his nose both at Federal prosecutors and the Trump impeachment process, Donald Trump’s personal attorney Rudy Giuliani is back in Ukraine.

Giuliani’s campaign, launched in November 2018, for investigations of Trump’s political rivals has led to House hearings and next week’s drafting of articles of impeachment by the Judiciary Committee. If the articles are adopted, the full House could vote on impeachment by Christmas.

Current and former US officials spoke throughout the House Intelligence Committee hearings of an “irregular channel” of foreign policy through Giuliani. They explained how his campaign, on the orders of Trump, threatened US and Ukrainian national security.

Two of Giuliani’s business associates have been indicted on campaign finance violations, and Federal prosecutors are investigating the former New York City Mayor. Reports last week tied Giuliani’s pursuit of the investigations — and lucrative contracts — to offers of legal assistance to Ukrainian oligarchs, including one fighting extradition to the US and another under FBI investigation.

But Giuliani has been in Kyiv this week, meeting the former Ukrainian officials who gave him disinformation and unsupported claims to tarnish Presidential candidate Joe Biden, to cover up Russia’s involvement in the 2016 US election, and to remove US Ambassador Marie Yovanovitch, seen as an obstacle to the campaign.

Giuliani’s cover story is that he is conducting interviews for a documentary for the right-wing attack outlet One America News Network.

In Kyiv, Giuliani has seen Viktor Shokin, another central figure in the campaign. Shokin was removed by the Ukrainian Parliament as Prosecutor General in March 2016 for his failure to investigate corruption — the Trump-Giuliani effort twists this into a dismissal forced by Joe Biden to protect his son Hunter, a board member with the Ukrainian gas company Burisma.

*Kostiantyn Kulyk, another prosecutor who has pushed the unsupported claims

*Andriy Telizhenko, a former Ukrainian diplomat who has spread the conspiracy theory that Kyiv colluded with the Democratic National Committee in the 2016 US Presidential campaign

*Former MP Andriy Artemenko, who proposed to the White House that sanctions be lifted on Russia and Moscow’s annexation of Crimea be recognized

*MP Andriy Derkach, who has promoted Russian interests in Ukraine and once studied at a KGB academy in Moscow.

…to the US assisting Ukraine with its anti-corruption reforms.

The American people will learn that Biden & other Obama administration officials, contributed to the increased level of corruption in Ukraine between 2014 to 2016.

This evidence will all be released very soon.

“Brazen on a Galactic Level

Jeffrey Edmonds, the National Security Council’s Russia director in both the Obama and Trump Administration, summarized:

It’s unbelievable to me the open way in which the Administration and Giuliani are still pursuing this. It is a way of…asserting that everything that we’re doing is perfectly normal, perfectly fine and we’re going to keep doing it.

Even some Republicans were disconcerted by Giuliani’s trip. Dan Eberhart, a prominent donor, said, “The fact that Giuliani is back in Ukraine is like a murder suspect returning to the crime scene to live-stream themselves moon dancing. It’s brazen on a galactic level.”

White House Deputy Press Secretary Hogan Gidley tried to evade the development: “That’s a question between Rudy and the President.”

“Two officials involved in the White House’s impeachment response” said they were not told of Giuliani’s travel and they do not view it as helpful.

Last week, as the House hearings piled up evidence of the Trump-Giuliani campaign, Trump tried to distance himself from his attorney: “You have to ask [what Giuliani was doing in Ukraine] to Rudy. Rudy has other clients, other than me….[He] has done a lot of work in Ukraine over the years.”

GOP Rep. Mo Brooks propped up the defense on Friday, “Rudy does what Rudy does.”