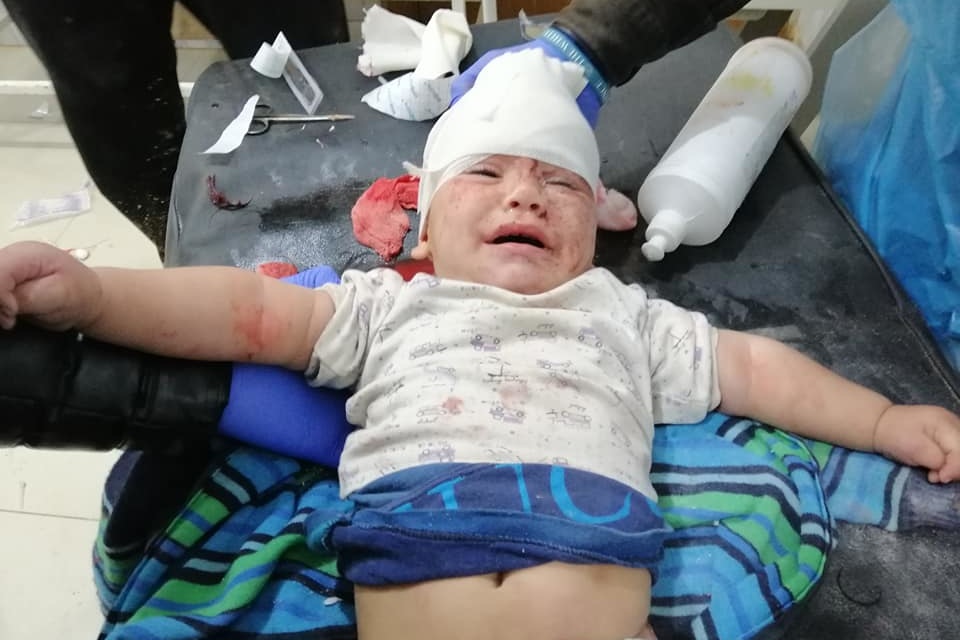 Russia and the Assad regime continued deadly attacks on civilians in northwest Syria on Thursday, as local activists warned that a new ground offensive may be imminent against the 3 million people in the greater Idlib area.

Another 16 civilians were killed, bringing the total since Monday — when the Russia-regime bombing resumed after a break for bad weather — to more than 50.

Most of the victims are women and children.

Resident, citizen journalists, and the White Helmets civil defense reported bombing throughout the day on the city of Ma’arat al-Num’an, a recurrent target. The Jabal al-Zawiya area and the town of Saraqeb were also attacked.

SOS #IdlibUnderFire… “Don’t cry sweetheart, don’t cry”, a white helmet was trying to calm a little girl trapped under rubble after her house was bombed by Russian airstrikes in #TellMardikh. Our team was targeted in a double-tap airstrike after they arrived to rescue civilians. pic.twitter.com/5F0AX3sjvo

SOS: Syrian regime and Russian attacks have put thousands of lives at risk in #Idlib
"Careful of shrapnels!, embrace yourselves!"
Watch how our volunteers were targeted with two barrel bombs after they arrived to rescue civilians in #TellMardikh. village in #Idlib this morning. pic.twitter.com/KyGfaZ66gO

Another 90,000 people have been displaced by the assaults, raising the total to more than 500,000 since the Russia-regime offensive in late April to overrun the greater Idlib area, the last major opposition territory in Syria.

The offensive has killed more than 1,100 civilians and wounded thousands, with the UN saying the operations may constitute a “war crime”.

Russian President Vladimir Putin announced a “pause” in early September, after the offensive seized part of southern Idlib and almost all of northern neighboring Hama Province. But the bombing resumed last month, as Moscow — despite Putin’s maneuvers with Turkey, whose forces are alongside anti-Assad fighters in northern Syria — continued to shatter the “de-escalation zone” declared by the two countries in autumn 2018.

As the white Helmets issued a statement about the “humanitarian crisis” caused by the latest attacks, local sources reported the resumption of ground attacks.

One said, “All attempts to take ground have been repelled by rebels so far”, even though AssD forces have been supplied with night-fighting equipment.

There are many casualties on the front lines, but civilians are suffering more from the brutal bombing far away [from the lines].

Urgent messages from #MaaratalNuman sector leader in the White Helmets tell of the humanitarian catastrophe that threatens the lives of more than 180,000 people in northern #Syria pic.twitter.com/iVxdMsilCE

A White Helmet volunteer and little girl named Islam, having a conversation in the most dangerous place in the world, after Russian raids had her trapped under rubble of her bombed house.We managed to rescue her alive despite a double-tap strike on the team. pic.twitter.com/VCW6VC70KG