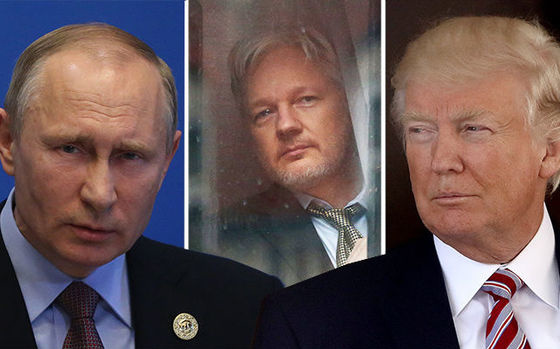 Newly-released testimony establishes the Trump campaign’s pursuit in 2016 of e-mails, stolen by Russia, that Donald Trump and his advisors thought would damage Democratic nominee Hillary Clinton.

The documents, 274 pages of notes by Special Counsel Robert Mueller of witness interviews, are the first tranche released by the Justice Department after a court order in a lawsuit by CNN and BuzzFeed News.

April’s 446-page Mueller Report established connections between the Trump campaign, Russia, and WikiLeaks, which published e-mails stolen from Clinton staff and the Democratic National Committee. However, Mueller declined to recommend criminal charges — saying that the issue was a matter for Congress — and the Trump Administration, led by Trump and Attorney General William Barr, falsely declared that the report had found “no collusion” between the campaign and Russian officials.

Gates set out to the FBI a series of occasions which led him to believe that Trump and advisors might have learned of WikiLeaks’ plans ahead of publication.

He told Mueller’s team that “candidate Trump said, ‘Get the e-mails'”. He added that Trump campaign advisor Michael Flynn, former head of the Defense Intelligence Agency and later Trump’s National Security Advisor, said “he could use his intelligence sources to obtain the e-mails.”

Gates, the right-hand man of Trump campaign manager Paul Manafort, explained, “Flynn had the most Russia contacts of anyone on the campaign and was in the best position to ask for the e-mails if they were out there.”

He explained how several top Trump advisor pursued the effort:

Steve Bannon — Trump’s campaign manager after Manafort was forced to leave in August 2016 because of ties to Ukraine-based Russians — also told Mueller’s office of Trump’s insistence on finding the 33,000 e-mails removed by Hillary Clinton from her private server, according to the documents.

Neither Bannon nor Gates said they knew Russia stole the Democratic documents. However, they confirmed that they believed foreign nationals had done the hacking.

Gates’ testimony detailed how Manafort tried to cover up any Russian involvement with the story that Ukrainian actors were responsible for hacking the Democratic National Committee.

Gates said Manafort had circulated the false claim to him and other Trump campaign aides. He explained that the conspiracy theory was also advanced by Konstantin Kilimnik, a former Russian intelligence officer whom Manafort met during the campaign.

The FBI assesses that Kilimnik retained tied to Russian intelligence throughout the period, including when Manafort offered him polling data from the Trump campaign.

Manafort’s conspiracy theory is now part of the Trump-Ukraine affair that has led to an impeachment inquiry into Trump.

In his July 25 call with new Ukrainian President Volodymyr Zelenskiy, the catalyst for a CIA official’s formal complaint and then the inquiry, Trump pursues an investigation of the unsupported conspiracy theory, as well as of 2020 Presidential candidate Joe Biden and the Democrats.

See EA Video Analysis: Will Trump Be Impeached? Will He Be Convicted?

Gates told the FBI that senior Trump advisor Flynn was “adamant” that the Russians were not responsible for the hacking.

Flynn was forced out as National Security Advisor, after only 21 days in the post, because of his contacts with Russian Ambassador Sergey Kislyak. He has pleaded guilty to lying to the FBI and has a sentencing hearing on December 18.

Gates is also awaiting his sentence after guilty pleas to conspiracy and lying to Mueller’s team. Manafort is serving a 7 1/2-year prison term on tax, fraud, and lobbying charges.