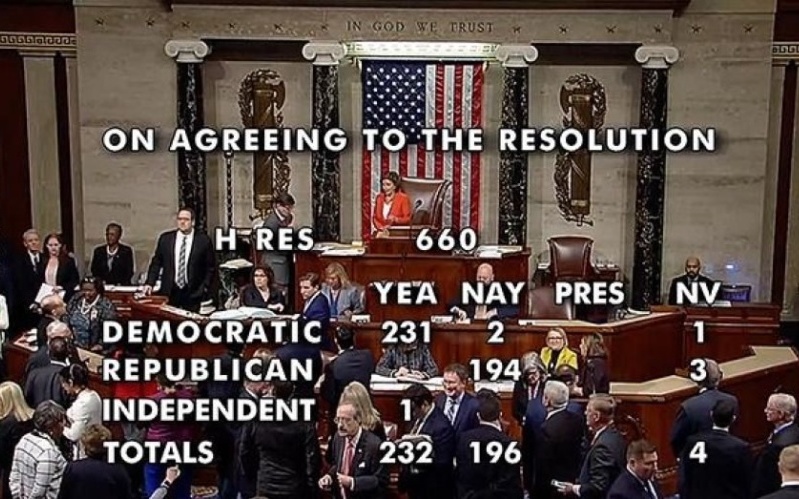 The House of Representatives approves the formal impeachment inquiry of Donald Trump over claimed abuses of power for personal gain, including his demand that Ukraine launch investigations to target Presidential candidate Joe Biden and the Democratic Party and to cover up Russia’s involvement in the 2016 US election.

The 232-196 vote was almost exclusively on party lines. All Republicans voted against the inquiry. They were joined by only two Democrats: Collin Peterson of Minnesota and Jeff Van Drew of New Jersey.

Speaker Nancy Pelosi, presiding over the session to emphasize its importance, said, “What is at stake in all of this is nothing less than our democracy.” Rep. Jim McGovern, the chairman of the House Rules Committee, explained:

We don’t know whether President Trump is going to be impeached but the allegations are as serious as it gets: endangering national security for political gain. History is testing us.”

Donald Trump put out more than 20 tweets and retweets about “The Greatest Witch Hunt In American History!” White House Press Secretary Stephanie Grisham derided “a sham impeachment” and “a blatantly partisan attempt to destroy the President”.

Another Official Testifies to Trump “Quid Pro Quo” on Ukraine

But as Trump railed, another top official was testifying to Trump’s “quid pro quo” cutting off military aid to Ukraine until it launched the investigations into Biden and the Democrats.

Timothy Morrison, the National Security Council’s official for Russia, added to the testimony of other current and former senior US officials, such as the current US chargé d’affaires in Kiev, William Taylor, and the NSC’s top Ukraine specialist Lt. Col. Alexander Vindman.

Morrison gave the Trump camp some solace by saying that he saw “nothing illegal” in Trump’s July 25 call with Ukrainian President Volodymyr Zelensky, in which Trump sought the investigations. However, he said that he was concerned enough that he asked the NSC’s chief lawyer John Eisenberg to review the conversation.

The call triggered a formal complaint from the CIA liaison with the White House over Ukraine, setting off the process which has led to the impeachment inquiry.

Morrison said he was worried about how any disclosure “would play out in Washington’s polarized environment”, affecting bipartisan backing for Ukraine in Congress” and “the Ukrainian perceptions of the U.S.-Ukraine relationship”.

The official tried to limit other testimony about the extent of the campaign by Trump and his personal attorney Rudy Giuliani for the Ukraine investigations. He avoided references to Trump and the “irregular channels” cited by Taylor and other officials, such as the former senior NSC official Fiona Hill and US Ambassador to Ukraine Marie Yovanovitch, recalled by Trump in May.

Instead, Morrison focused on US Ambassador to the European Union Gordon Sondland, a key part of the Trump-Giuliani effort and a political appointee who donated $1 million to Trump’s inaugural committee. He said of Sondland’s connection of military aid with investigations: “I hoped that Ambassador Sondland’s strategy was exclusively his own and would not be considered by the leaders of the administration and Congress, who understood the strategic importance of Ukraine to our national security.”

Like other current and former officials, Morrison appeared after he was subpoenaed, despite White House orders not to do so.

The House committees are seeking more closed-door testimony from witnesses before a recess next Friday and the start of the open hearings. On Wednesday, they invited former National Security Advisor John Bolton and two White House lawyers, including the NSC’s Eisenberg, to appear.