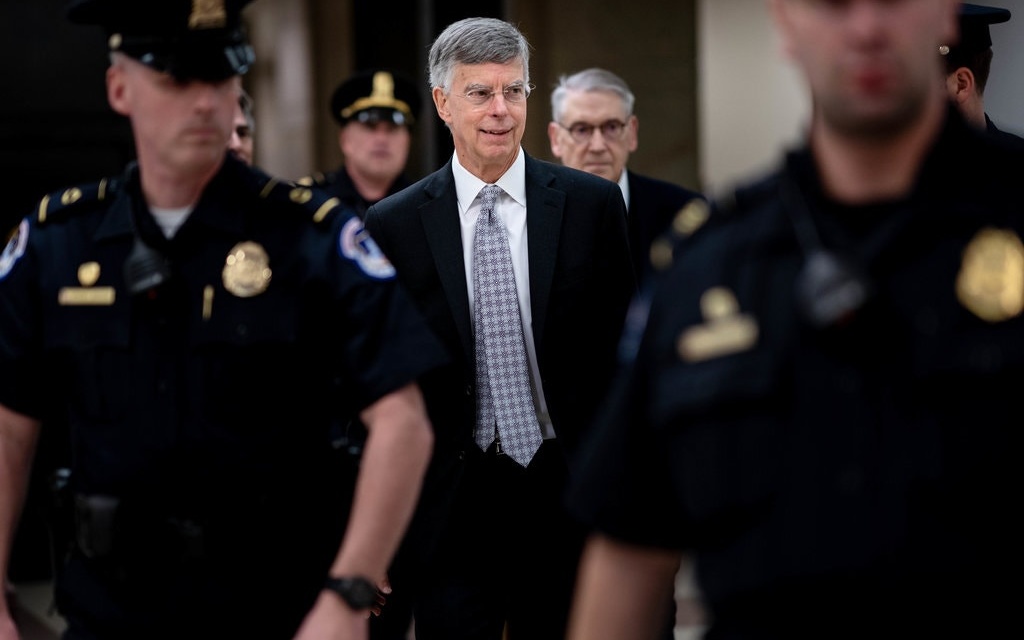 In detailed testimony to House committees, US Charge d’Affaires to Ukraine William Taylor says Donald Trump held up military aid to Kiev as he demanded investigations of President candidate Joe Biden and the Democratic Party.

Taylor’s appearance was behind closed doors, but in his 15-page opening statement, released to the media, the diplomat firmly established the “quid pro quo” between assistance and pursuit of Biden, through his son’s board membership on the Ukrainian gas company Burisma. Trump and his lawyer Rudy Giuliani also sought investigation of a conspiracy theory, covering up Moscow’s interference in the 2016 election, that a Ukrainian rather than Russian server hacked the Democratic National Committee that year.

Taylor’s statement demolished the insistence of the Trump camp that Trump, whose July 25 call with new Ukrainian President Volodymyr Zelenskiy has sparked an impeachment inquiry, made no connection between his suspension of $391 million in assistance — ordered a few days before the call — and the investigations.

The charge d’affaires was already on record, through texts released by US envoy to Ukraine Kurt Volker, writing of in early September of a “nightmare scenario”: “[It is] crazy to withhold security assistance for help with a political campaign.”

But Taylor went farther back in time and with much more information about the extent of the Trump-Giuliani campaign, and its implementation by officials like White House Chief of Staff Mick Mulvaney.

The career diplomat came out of retirement in June after US Ambassador Marie Yovanovitch was forced out by Trump and Giuliani as a perceived barrier to their efforts. “It was — and is — a critical time in U.S.-Ukraine relations: Volodymyr Zelenskyy had just been elected president and Ukraine remained at war with Russia,” he wrote in his statement.”

But Taylor immediately discovered in Kiev “a weird combination of encouraging, confusing, and ultimately alarming circumstances”, notably “an irregular, informal channel of US policymaking” with Giuliani, US envoy Volker, US Ambassador to the European Union Gordon Sondland, and Energy Secretary Rick Perry.

The charge d’affaires testified that on June 27, 10 days after his arrival in Kiev, Sondland told him that Zelenskiy — who was seeking the boost of a White House visit — “needed to make clear to President Trump that he, President Zelenskyy, was not standing in the way of ‘investigations'”.

Taylor wrote, “By mid-July it was becoming clear to me that the meeting President Zelenskiy wanted was conditioned on the investigations of Burisma and alleged Ukrainian interference in the 2016 U.S. elections. It was also clear that this condition was driven by the irregular policy channel I had come to understand was guided by Mr. Giuliani.”

On July 18, during a National Security Council conference call, a staffer of the Office of Management and Budget said security assistance to Ukraine had been suspended: “The directive had come from the President to the Chief of Staff [Mulvaney] to OMB.”

Taylor described his reaction, “I realized that one of the key pillars of our strong support for Ukraine was threatened. The irregular policy channel was running contrary to the goals of longstanding US policy.”

A series of NSC meetings unanimously recommended restoration of the aid, but the official staff had been overtaken. Taylor learned that, in a July 10 meeting with Ukrainian officials at the White House, Sondland — a political appointee who was a major donor to Trump’s inaugural committee — “connected ‘investigations’ with an Oval Office meeting”. National Security Advisor John Bolton abruptly ended the meeting and then told his senior personnel that “they should have nothing to do with domestic politics” and that he wanted nothing to do with the Trump-Giuliani-Mulvaney “drug deal”.

The alternative channel pressed ahead with its conditions for any Zelenskiy visit: Volker said that what was “[m]ost impt is for Zelensky to say that he will help investigation” and Sondland recommended that, in the forthcoming phone call with Trump, the Ukrainian President say, “I will leave no stone unturned” regarding inquiries.

Taylor was in limbo for a month, knowing the aid suspension but with the Ukrainians unaware of Trump’s order. Then on August 29, Politico revealed the ban, and “Ambassador Sondland told Mr. Yermak [Andriy Yermak, senior advisor to Zelenskiy] that the security assistance money would not come until President Zelenskyy committed to pursue the Burisma investigation”.

Taylor asked Sondland for confirmation, receiving the reply by phone:

Ambassador Sondland told me that President Trump had told him that he wants President Zelenskiy to state publicly that Ukraine will investigate Burisma and alleged Ukrainian interference in the 2016 U.S. election.

Ambassador Sondland also told me that he now recognized that he had made a mistake by earlier telling the Ukrainian officials to whom he spoke that a White House meeting with President Zelenskyy was dependent on a public announcement of investigations. In fact, Ambassador Sondland said, “everything” was dependent on such an announcement, including security assistance. He said that President Trump wanted President Zelenskyy “in a public box” by making a public statement about ordering such investigations.

But Zelenskiy balked at making the statement, drafted by Volker and Sondland, and news broke of a formal complaint — by the CIA’s liasion with the White House on Ukraine — over the Trump-Zelenskiy call on July 25.

Sondland scrambled for political cover: “President Trump was adamant that President Zelenskyy, himself, had to ‘clear things up and do it in public’. President Trump said it was not a ‘quid pro quo’.”

Taylor then texted his view that the aid-investigations link was “crazy” and concern about any Zelenskiy statement protecting Trump: “[My] nightmare is they (the Ukrainians) give the interview and don’t get the security assistance. The Russians love it. (And I quit.).”

Sondland and Volker responded: “President Trump is a businessman. When a businessman is about to sign a check to someone who owes him something, he said, the businessman asks that person to pay up before signing the check.” Probably trying to avoid a paper trail, Sondland asked Taylor to follow up by phone, rather than by text.

Facing the growing furor over the revelation of the Trump-Zelenskiy call, the White House unfroze the security assistance on September 11.

The White House responded to the damaging testimony, through Press Secretary Stephanie Grisham, with a scathing assault on Taylor and other current and former officials who have testified to the House investigators about the Trump-Giuliani campaign.

.@PressSec releases a statement on the Taylor testimony: pic.twitter.com/TWsQsy1i8G

Trump tried to pre-empt Taylor with a racially-charged tweet.

So some day, if a Democrat becomes President and the Republicans win the House, even by a tiny margin, they can impeach the President, without due process or fairness or any legal rights. All Republicans must remember what they are witnessing here – a lynching. But we will WIN!

But there were signs of a crack in unconditional support by Republican legislators for Trump, as impeachment looms. Senate Majority Leader Mitch McConnell refused support of Trump’s claim that McConnell had described the July 25 call with Zelenskiy as “perfect”.

“I don’t recall any conversation with the president on that phone call,” McConnell told reporters.

"Given the history in our country, I would not compare this to a lynching. That was an unfortunate choice of words." pic.twitter.com/rDit63jhsd