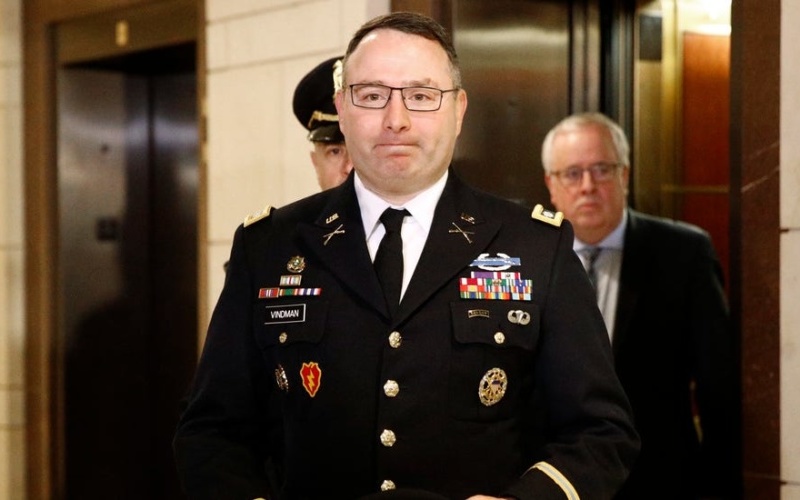 Trying to protect Donald Trump, the White House altered the transcript of his call with Ukrainian President Volodymyr Zelenskiy, according to the National Security Council’s expert on Ukraine.

The July 25 call triggered a formal complaint, by the CIA liaison with the White House over Ukraine, and then the impeachment inquiry into Trump over his attempt to pressure Kiev into investigations of Presidential candidate Joe Biden and the Democratic Party.

Lt. Col. Alexander Vindman told House investigators on Tuesday that the White House transcript of the call omitted crucial words and phrases. He said he tried to restore them but failed, according to “three people familiar with the testimony“.

The omissions included Trump’s assertion of recordings of Biden discussing corruption in Ukraine, and an explicit mention by Zelenskiy, of Burisma Holdings, the Ukrainian gas company where Biden’s son Hunter was a board member.

Vindman, a Ukrainian-American highly-decorated veteran, is the first witness who listened to the July 25 call. His opening statement highlighted a campaign by Trump and his attorney Rudy Giuliani — including Trump’s freeze on military aid to Ukraine until it launched the investigations — which could “threaten all US national security”.

When they realized the significance of the Trump-Zelenskiy call, White House staff confiscated all copies of the transcript and put them in a top-secret area. But after the revelation of the formal complaint, Trump’s office was forced into publication of a reconstructed record of the conversation.

Vindman testified on Tuesday that he “did not think it was proper” for Trump to ask Zelensky to investigate a political rival.

Trump also sought, on the basis of an unsupported conspiracy theory, an investigation to cover up Russia’s interference in the 2016 election.

A set of ellipses in the reconstructed transcript hides Trump’s reference to a recording of Biden, apparently of the former Vice President’s statement in January 2018 that he sought the dismissal of Prosecutor General Viktor Shokin over his alleged failure to fight corruption.

The Trump camp has repeatedly distorted Biden’s remarks as a confession that he pursued Shokin’s firing to protect Hunter Biden at Burisma.

In fact, after Biden presented the Obama Administration’s official position on corruption, the Ukraine Parliament dismissed Shokin in March 2016 over his inability or unwillingness to deal with the issue.

Vindman detailed his alarm at the Trump-Giuliani campaign, criticizing “outside influencers” with a “false narrative” about Ukraine. He explained that he confronted the US Ambassador to the European Union, Gordon Sondland — a political appointee and Trump donor central in the Trump-Giuliani efforts — after Sondland spoke in a White House meeting with Ukrainian officials about “Ukraine delivering specific investigations in order to secure [Zelenskiy’s] meeting with the President”.

After the Trump-Zelenskiy call, Vindman took his concerns to John Eisenberg, the NSC’s legal adviser. The colonel sought in mid-August to restore the $391 million in frozen military aid to Ukarine, but Trump refused to sign the memorandum

Anticipating the seriousness of the colonel’s testimony, Trump supporters tried to portray the veteran — awarded the Purple Heart for his service in the Iraq War — as disloyal to the US.

Former GOP Rep. Sean Duffy declared in a TV interview that Vindman “has an affinity probably for his homeland [Ukraine]”.

After other members of the Trump camp spread and echoed the remarks, Rep. Liz Cheney — the third-highest Republican in the House — finally knocked back the “shameful” claims “questioning the patriotism [and] the dedication to country” of Vindman.