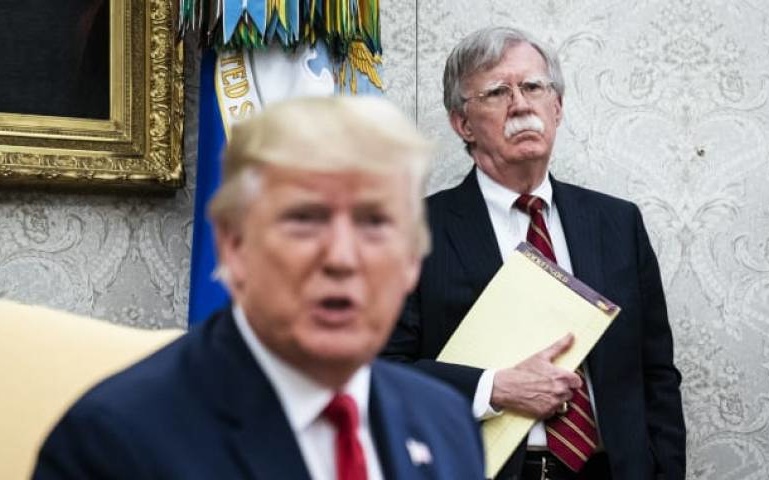 The committees also summoned two senior White House lawyers to appear next week, following a series of revelations from former and current US officials about the campaign by Trump and his personal attorney Rudy Giuliani — including Trump’s freezing of military aid to Ukraine to get the investigations to tarnish rivals and to cover up Russia’s interference in the 2016 US election.

Bolton has moved to the center of the inquiry because of a pair of meetings on July 10, two weeks before the Trump call with Ukrainian President Volodymyr Zelenskiy that sparked a formal complaint by a CIA official — the liaison with the White House over Ukraine — and then an impeachment inquiry.

In the first of the White House meetings, held with Ukrainian officials, US Ambassador to the European Union Gordon Sondland — a political appointee, Trump donor, and central figure in the Trump-Giuliani campaign — said a Zelenskiy visit to the White House depended on the launch of the investigations.

Angered, Bolton convened his staff. According to former senior NSC official Fiona Hill, who testified earlier this month, he said he would not the “drug deal” involving Trump, Giuliani, and White House Chief of Staff Mick Mulvaney. Giuliani was a “hand grenade who’s going to blow everybody up”, he said.

Subsequent testimony — including from former US Ambassador to Ukraine Marie Yovanovitch, current US chargé d’affaires to Kiev William Taylor, and the NSC’s top official on Ukraine, Lt. Col. Alexander Vindman — have given details of the “irregular channel” of “outside influencers” around Trump.

Vindman testified on Tuesday that the campaign for investigations and pressure on Ukraine, including the cut-off of military aid, was a threat to “all US national security”.

Vindman said Ukrainian officials had complained to him about Giuliani’s demands. He warned Zelenskiy, as the President was inaugurated in May, to avoid becoming involved in US domestic politics.

While playing along with Trump’s call for investigations in the July 25 call, Zelenskiy balked in September at delivering a public statement drafted by Giuliani, Sondland, and US envoy to Ukraine Kurt Volker.

Initial signs on Wednesday were that Bolton, who was pushed out as National Security Advisor in September, would not accept the House invitation. His lawyer said Bolton was “not willing to appear voluntarily”.

However, the attorney did not say if Bolton would testify once a subpoena was issue, as other witnesses have done.

The White House has tried to block the inquiry by telling the current and former officials not to give testimony and hand over documents, defying any subpoena.

But the stonewall has crumbled with more than a dozen key witnesses who have testified or will do so in the next week.

On Wednesday, Assistant Secretary of State John Sullivan confirmed that Trump’s attorney Giuliani was involved in the smear campaign to remove Ambassador Yovanovitch, seen as a barrier to the campaign for investgiations.

He said that any Trump pressure on Kiev was improper, “I don’t think that would be in accord with our values.”

Trump recalled Yovanovitch in May, after Giuliani fed false information to a writer for The Hill site tarnishing her service in Ukraine.

Tim Morrison, the NSC’s Europe and Russia expert, resigned on Wednesday on the eve of his scheduled testimony.