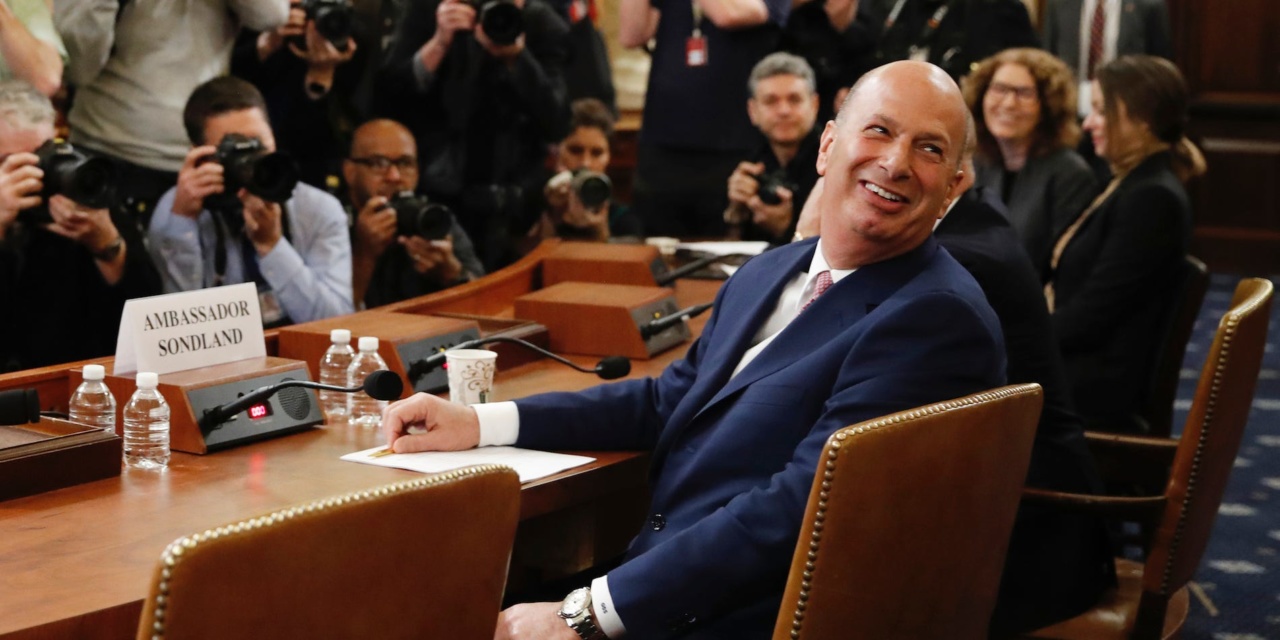 Donald Trump’s defense over his pressure on Ukraine collapses with the testimony of his former ally, Ambassador Gordon Sondland.

Trump has denied any “quid pro quo” — such as military aid and a White House visit by new Ukrainian President Volodymyr Zelenskiy — a statement of investigations to tarnish Presidential candidate Joe Biden and to cover up Russia’s interference in the 2016 US election.

But in six hours before the House Intelligence Committee on Wednesday, Sondland — a Trump political appointee who is Ambassador to the European Union — said Trump’s attorney Giuliani pursued the quid pro quo.

Sondland made clear that Giuliani was acting at “the direction” of Trump. He said that Trump told him and others, “Go talk to Rudy”.

He summarized, “We followed the President’s orders.”

Read Full Transcript of Sondland TestimonyDamage From The Inside

A series of current and former US officials have established, in closed-door and now public testimony, the Trump-Giuliani campaign and the quid pro quo over a statement of the investigations.

But Sondland is distinct because he was a Trump loyalist who had been part of the effort — unlike the other US officials, he had spoken with Trump about the initiative.

In his initial closed-door testimony last month, the Ambassador tried to hold the line by saying he knew of no quid pro quo. However, after revelations of texts and calls in which he discussed the link — notably with the top US diplomat in Kyiv, William Taylor, and US envoy to Ukraine Kurt Volker — he revised his statement earlier this month, saying he knew of the link from early September.

Yesterday his opening statement went much farther in setting out Giuliani’s attempts from May 23, when Sondland said he was told of the drive for investigations, through September when the campaign was exposed by a formal complaint about the July 25 call between Trump and Zelenskiy.

The Ambassador also widened the net of US officials who supported, or at least allowed, the Trump-Giuliani campaign. He testified, with support from e-mails and texts, that Secretary of State Mike Pompeo signed off on the pressure for a statement of investigations. He confirmed that Acting White House Chief of Staff Mick Mulvaney — who acknowledged in October that a quid pro quo was demanded from Ukraine — was deeply involved.

And he said that he raised the issue of the freeze on military aid, and why Trump had ordered it days before the July call with Zelenskiy, with Vice President Mike Pence on September 1 during a trip to Poland.

Was there a quid pro quo? As I testified previously, with regard to the requested White House call and White House meeting, the answer is yes.

Everyone was in the loop. It was no secret.

The Aid Link — and Who Testifies Next

In afternoon testimony, Defense Department official Laura Cooper said Ukrainian officials may have known as early as late July of the aid freeze.

Cooper explained that Kyiv questioned the State and Defense Departments about the status of the military funding on July 25, hours after the Trump-Zelenskiy call.

Trump’s camp have insisted that Ukraine did not know of the suspension until reports circulated in late August.

Yesterday’s revelations exposed the partial failure of the White House to block the inquiry, through commands to witnesses to defy subpoenas. Sondland explained that, while he had come forward despite the pressure, he was denied documents by the White House and State Department.

Attention now turns to whether Pompeo, Mulvaney, and former National Security Advisor John Bolton will be summoned — and whether the White House will prevent their testimony. Democrats could pursue a legal battle to ensure the appearances, but that would delay the process and a vote on impeachment.

Instead, Committee chair Rep. Adam Schiff indicated during this week’s hearings that the stonewalling could be used as part of an impeachment article against Trump for obstruction of Congress.

He said of Sondland’s testimony, during a break in the hearing, “It goes right to the heart of the issue of bribery, as well as other potential high crimes and misdemeanors.”

Trump’s “I Want Nothing” Defense

With Republican legislators stunned by the depth of Sondland’s testimony, Trump clung to a September 9 conversation with Sondland, who asked about the status of the frozen military aid.

Trump and his defenders avoided the key fact that the conversation with Sondland came amid pressure on Trump over the July 25 call and a possible quid pro, spurred by a formal complaint — from the CIA liaison with the White House over Ukraine — about the July 25 call.

Nor did they note the implications of Trump’s command, as he constructed a denial of any direct demand over investigations, to Sondland: “Tell Zelenskiy to do the right thing.”

In his concluding shout, Trump told reporters, “This is the final word from the President of the United States.”