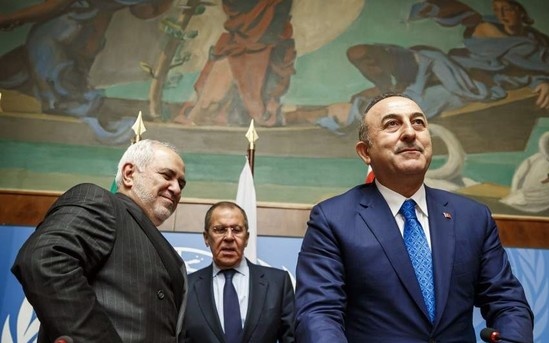 Russia and Iran, the essential backers of the Assad regime, lashed out on Tuesday at the US over the continued presence of American troops in Syria.

Three weeks ago, during a call with Turkish President Recep Tayyip Erdoğan, Donald Trump suddenly ordered the withdrawal of the 1,000 US personnel from northern Syria and accepted Turkey’s cross-border offensive into mainly-Kurdish areas along the Turkish-Syrian border.

The Pentagon has pushed back against an American departure, ensuring the retention of some troops with the argument that they will protect Kurdish-held oilfields in northeast Syria. Meanwhile, Turkey and Russia have announced joint military oversight of an area 480 km (270 miles) long and 30 km (19 miles) deep, across the Kurdish cantons of Kobani and Cezire.

At Tuesday’s press conference alongside Turkish and Iranian counterparts in Geneva, Switzerland, Russian Foreign Minister Sergei Lavrov declared that the American presence in Syria is “illegal“: “The arrogant statement that this presence is needed to protect the oil riches of Syria is arrogant. It turns out that they [the oilfields] are being protected from Syria itself.”

Since 2014, the US military role in Syria has rested on the fight against the Islamic State. In October 2015, the Americans created the Kurdish-led Syrian Democratic Forces to remove ISIS from the northeast — an alliance threatened by Trump’s steps this month.

Trying to undermine the US position, Russia has spent the past week spreading the unsupported claim that the Americans are taking Syrian oil outside the country for sale.

In contrast, Lavrov said the protection of the oilfields was only a “pretext” for the continued American presence.

Significantly, he did not describe the offensive by Turkey and Syrian rebels or the presence of Ankara’s forces inside Syria as “illegal”, despite the objections of the Assad regime.

Turkey Focuses on Control of Northeast

Officially, the three Foreign Ministers gathered to discuss the official launch of a Constitutional Committee for Syria.

However, the Assad regime has long held out against the implementation of the committee, an initiative first announced by Russia in early 2018, objecting to the presence of representatives from much of the Syrian opposition and emphasizing that Syrian “sovereignty” must be a priority.

Turkish Foreign Minister Mevlüt Çavuşoğlu preferred to focus on the situation in northeast Syria, warning that the Kurdish militia YPG must withdraw from the “safe zone” or face elimination.

He said that, for now, Ankara trusts Russia’s assurance that the Kurdish fighters have left the area.

Syria’s natural resources belong to Syrians. Oil or other types of revenue should be used for reconstruction efforts including local infrastructure, support for civilians, IDPs (internally displaced persons), and refugees.

Just as Syrians should be able to determine their own political future, they should also be allowed to decide how the resources of their own land should be spent.

But Altun did not refer to the American presence or say if and how the oilfields should be taken from Kurdish control.

Instead, Daily Sabah, which is close to the Turkish Government, features Çavuşoğlu’s vow to “eliminate remaining YPG terrorists“.