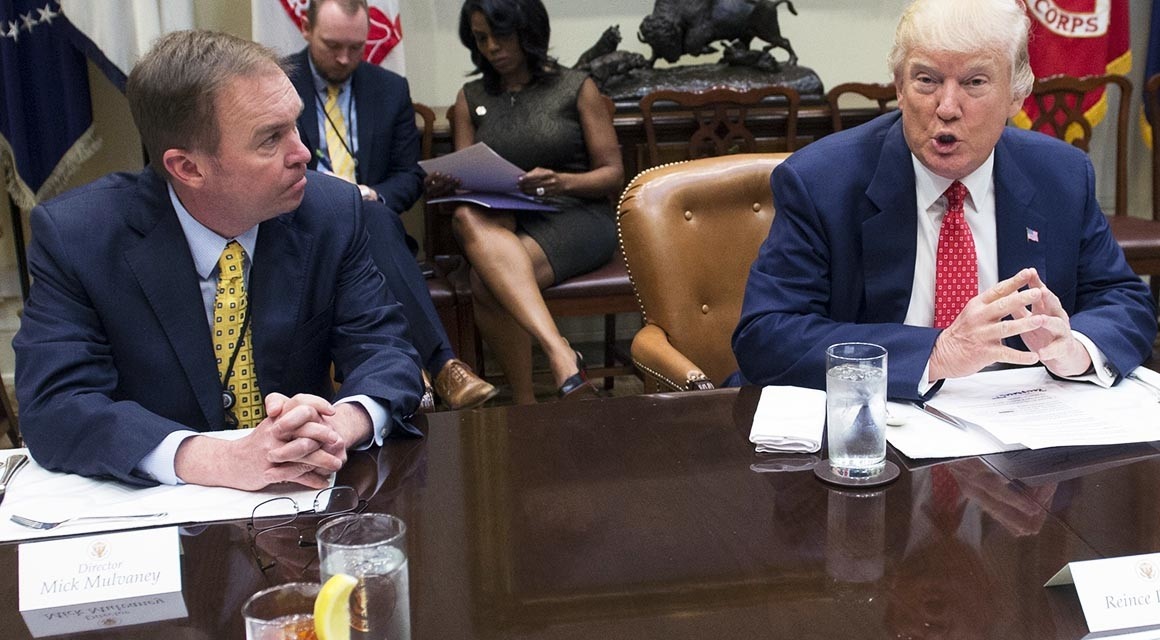 White House Chief of Staff Mick Mulvaney struggles to deny his admission that Donald Trump held up military aid to Ukraine to obtain Kiev’s investigation of the Democratic Party.

In a press conference last Thursday, Mulvaney linked Trump’s suspension of almost $400 million in assistance to his request— made in a July 25 phone call to newly-inaugurated Ukrainian President Volodymyr Zelenskiy — for an investigation of a conspiracy theory that Ukraine, not Russia, was the site of a server hacking the Democratic National Committee in the 2016 election.

In the conversation with Zelenskiy, Trump also sought investigation of Presidential candidate and former Vice President Joe Biden. The revelation of the call, through a formal complaint by the CIA liaison with the White House on Ukraine, has triggered an impeachment inquiry.

Mulvaney pointed in the press conference to a “quid pro quo”, destroying the Trump camp’s denials:

The look back to what happened in 2016 certainly was part of the thing that [Trump] was worried about in corruption with that nation. And that is absolutely appropriate….

Did he also mention to me in passing the corruption related to the DNC server? Absolutely. No question about that. That’s why we held up the money.

In a Sunday interview with Fox News’s Chris Wallace, Mulvaney insisted, “That’s what people are saying that I said, but I didn’t say that.” He maintained that he had given only “two reasons” for the suspension of military aid to Ukraine: corruption and US demands for other countries to give assistance.

Wallace then played the clip from Thursday where Mulvaney spoke of the investigation of the DNC, the Chief of Staff.

Mulvaney stepped back, “I recognize that,” but tried to counter-attack: “Go back to what actually happened in the real world….Folks misinterpreted what I said. But the facts are absolutely clear and they are there for everyone to see.”

The Chief of Staff insisted there was no quid pro quo because “the money [military aid] flowed without any connection whatsoever to the D.N.C. server”.

In fact, the White House only released the assistance in September after the initial revelations of the Trump-Zelenskiy call in the CIA official’s formal complaint.

Mulvaney then risked a further assertion of the conspiracy theory about a “Ukraine server” hacking the Democrats, used to cover up Russia’s interference in support of Trump in the 2016 election.

It is legitimate for the President to want to know what’s going on with the ongoing investigation into the server. Can I see how people took that the wrong way? Absolutely.

Secretary of State Mike Pompeo, who has tried unsuccessfully to block House committees from interviewing witnesses and obtaining documents, distanced himself from Mulvaney: “I will leave to the Chief of Staff to explain what it is he said and what he intended.”

But Trump continued to rail on Twitter, pushing the conspiracy theory: