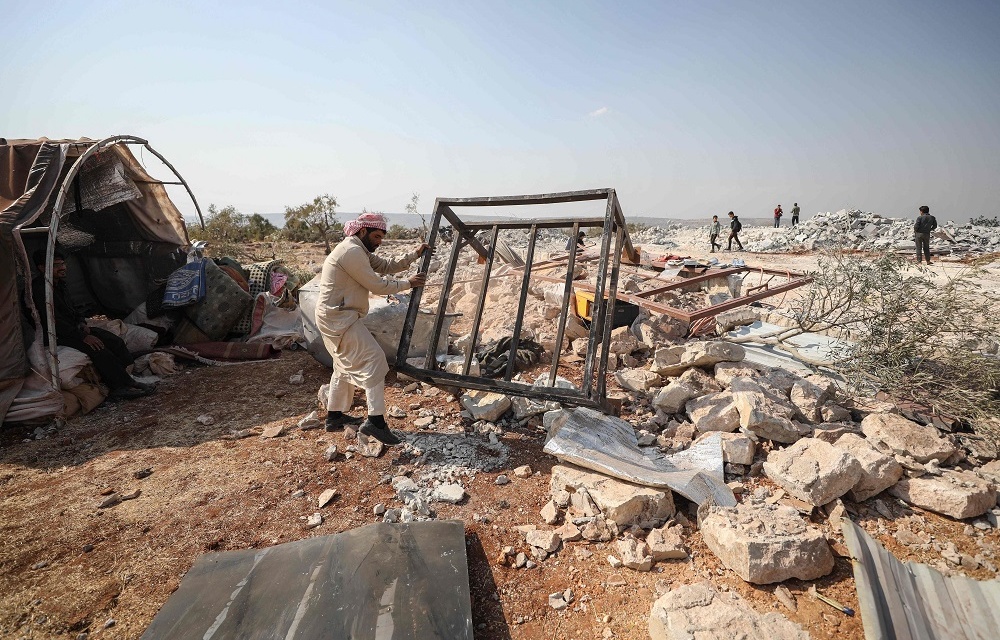 A Syrian man clears debris from the site of a US helicopter and commando raid on an Islamic State compound, Barisha, northwest Syria, October 27, 2019 (Omar Haj Khadour/AFP)

Even as Trump claimed personal credit for the operation on Sunday, the intelligence and counter-terrorism officials said his command — issued after an October 6 with Turkish President Recep Tayyip Erdoğan, who has vowed to eliminate Kurdish “terrorists” — threatened co-operation with Iraqi and Kurdish intelligence operatives to identify Baghdadi’s location in northwest Syria.

Two US officials said the ISIS leader, sheltering at the home of a deputy in Idlib Province, was tracked after the arrest of one of his wives and a courier this summer. He was among nine people killed in the raid.

The officials praised the Kurdish-led Syrian Democratic Forces, who continued to provide information despite Trump’s withdrawal order and acceptance of a Turkish cross-border offensive to take parts of Kurdish-held territory in northeast Syria.

SDF commander Mazloum Kobani, who is appealing to US officials and legislators for renewed American support, wrote on Twitter: “A successful historical operation as a result of joint intelligence work with the United States.”

Defense Secretary Mark Esper, speaking on Sunday talk shows about the operation, said he did not know if the helicopter and commanod raid could have proceeded with a US withdrawal from northern Syria: “I’d have to consult with our commanders about that.”

After months of planning, the operation was launched just after midnight local time on Sunday. Helicopters from an American base in Iraqi Kurdistan flew 70 minutes across northern Syria to Barisha, near the Turkish border. Aerial fire on the compound of Baghdadi’s deputy Abu Mohammed al-Halabi provided cover for commandos to descend into a landing zone.

Reports, echoed by Esper and exaggerated by Trump’s press conference, said Baghdadi was tracked into an underground tunnel where he detonated an explosives vest, killing himself and three children. Eleven other children were taken to a neighbor’s home.

The Defense Secretary stood back from Trump’s lurid declaration of Baghdadi “dying like a dog…whimpering and crying and screaming all the way”.

“I don’t have those details,” Esper said. “The President probably had the opportunity to talk to the commanders on the ground.”