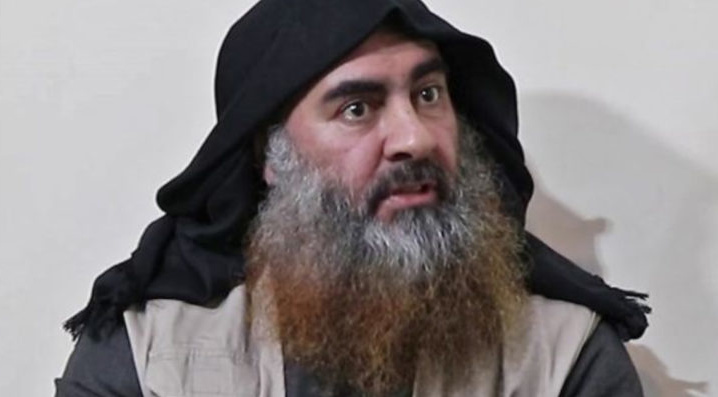 Is Islamic State leader Abu Bakr al-Baghdadi dead, killed in a US air and ground raid?

Donald Trump is giving a statement bragging about the killing of the “coward” Abu Bakr al-Baghdadi, who “died like a dog”.

Both Turkey and the Kurdish-led Syrian Democratic Forces — a foe of Ankara and formerly supported by the US — have claimed supply of intelligence to the American military for Saturday’s raid.

The Turkish claim is being circulated by the State-run Anadolu Agency. SDF commander Mazloum Kobani, who is appealing to US officials to renew their support in the face of a Turkish-rebel offensive in northeast Syria, posted his claim on Twitter: “A successful historical operation as a result of joint intelligence work with the United States.”

Two officials — one from Iraqi intelligence — told The Guardian’s Martin Chulov that the raid followed a month-long operation tracking Baghdadi’s presence in northwest Syria, through a smuggler who moved the wives of two of the ISIS leader’s brothers to Idlib Province.

The Iraqi intelligence official said the information was passed to the CIA earlier this month.

Baghdadi was reportedly at the house of a deputy, Abu Mohammed al-Halabi, whom some reports say was killed — and whom others say was slain with no confirmation of Baghdadi’s death. First responders said 10 children from the house were taken to neighbors.

Newsweek, citing a US Army official briefed on Saturday’s operation, said al-Baghdadi was killed. According to the report, the Defense Department told the White House they have “high confidence” of the killing, but further verification is pending DNA and biometric testing.

Another US official told The Associated Press that the ISIS leader was targeted in Idlib Province in northwest Syria. A third confirmed the attack to Reuters but did not say if al-Baghdadi had been slain or captured. The site Defense One claimed:

UPDATE: ISIS leader #Baghdadi is believed to have detonated his own suicide vest, multiple sources confirm to @DefenseOne. #Syria

Newsweek’s sources also said al-Baghdadi was believed to have detonated his explosives vest, as did two of his wives.

An Iranian official told Reuters, “Iran was informed about Baghdadi’s death by Syrian officials who got it from the field.” A second official confirmed the report.

Our sources from inside Syria have confirmed to the Iraqi intelligence team tasked with pursuing Baghdadi that he has been killed alongside his personal bodyguard in Idlib, after his hiding place was discovered when he tried to get his family out of Idlib towards the Turkish border.

The raid was carried out by the Joint Special Operations Command’s Delta Team. US defense sources said al-Baghdadi’s compound had been under surveillance for some time. A “senior Pentagon official” said it was destroyed by an airstrike to prevent it from becoming a “shrine” to the ISIS leader.

Donald Trump is scheduled to make an announced at 9 am Washington time (1300 GMT). He tweeted excitedly on Saturday night:

Something very big has just happened!

A Raid in Northwest Syria?

The claimed location of al-Baghdadi’s compound in Idlib Province in northwest Syria is a surprise.

After it battled with anti-Assad factions in 2014, ISIS was expelled as an organized force from Idlib the following year. Much of the province is controlled by the hardline Islamist bloc Hay’at Tahrir al-Sham, which split violently from ISIS during the confrontation.

But multiple reports, including from BBC producer Riam Dalati, said the raid by US commandos and jets was on Barisha, near the Turkish border.

Confirmed
Activist says this is indeed filmed where #Baghdadi raid took place in #Barisha, #Idlib. #HTS stopped him on outskirts where a tough security cordon has been laid banning people from heading towards site. https://t.co/Uo8NkW8z1I

An HTS source claimed Baghdadi and one of his deputies were killed, and that the Islamic bloc had been searching for the ISIS leader for some time.

Trump has faced intense domestic criticism, including from Republicans, after his sudden order to withdraw US forces from northern Syria during an October 6 call with Turkish President Recep Tayyip Erdoğan.

Critics said Trump had abandoned the Kurdish-led Syrian Democratic Forces, created by the US in October 2015 to remove ISIS from northeast Syria.

Last week the Administration, through Vice President Mike Pence, acceded to a Turkish ultimatum for Kurdish factions to leave the Ankara-declared “safe zone”, where Erdoğan hopes to return 2 million of the 3.6 million Syrian refugees in Turkey.

On Tuesday, Erdoğan and Russian President Vladimir Putin confirmed a 10-point agreement for joint military control of the area across the Kurdish cantons of Kobani and Cezire.

From US Captive to ISIS Leader

The rise of Baghdadi, an Iraqi cleric, began with his role in the insurgency against the US occupation of Iraq after the 2003 war. He was detained by the Americans in prisons at Abu Ghraib and Camp Bucca.

He was part of Al Qa’eda in Iraq, formed during the insurgency, and helped rebuild it after sustained US military operations damaged the organization between 2007 and 2009. When the Islamic State of Iraq was formed in 2010, he took over the leadership after a US-Iraq1 operation killed his predecessor Abu Omar al-Baghdadi.

In 2014, after a lightning offensive took over one-third of Iraq and the group expanded its operations in Syria, Baghdadi refashioned the organization as the Islamic State of Iraq and Syria. He announced the “Caliphate” in a rare appearance in July 2014, issuing the declaration in a Mosul, Iraq mosque.

Baghdadi has survived a series of assassination attempts, including by the Americans, but ISIS has been crippled by the killing of other commanders and by its loss of territory across Syria and Iraq.