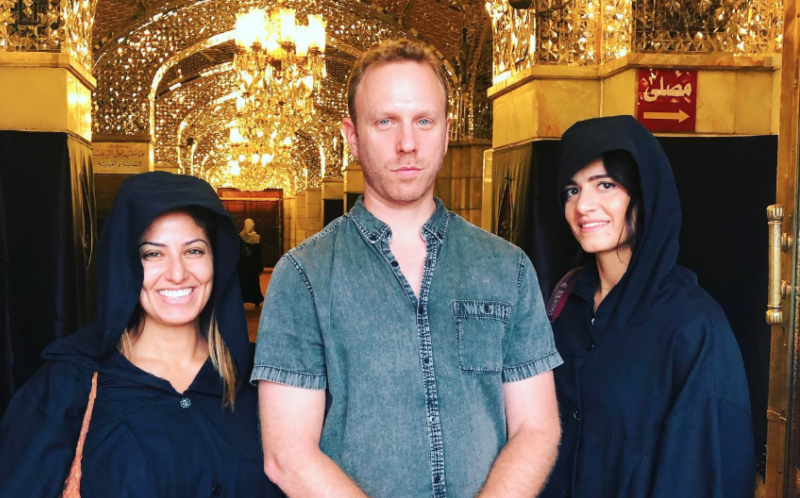 On Monday, EA republished the thoughts of Syrian refugee Sarah Hunaidi about Western activists on tours of Syria hosted by the Assad regime.

No matter how many tours the Syrian government organises to sugarcoat the situations to westerners, they can’t change reality: Syria is, indeed, a beautiful and stunning country that I miss dearly. It’s also a country run by a dictator, one who, by all means necessary, crushed a popular uprising of his own people who simply demanded better.

Hunaidi did not publish the names of the latest activists to enjoy the regime’s hospitality. But academic and journalist Muhammad Idrees Ahmad does in his commentary for Al Jazeera English:

A week after Damascus feted a delegation of the European far right, Bashar al-Assad’s regime ushered in a new set of suitors. The American blogger and contributor to Russia’s State outlet Sputnik, Max Blumenthal, announced his arrival in Syria with a selfie.

Here I am near the border of Jobar, a neighborhood east of Damascus occupied by the Saudi-backed Jaish al-Islam until early last year. Militia control extended close to the tall building behind me. The one I’m in is in a mostly Christian area was hit by a mortar in April 2018. pic.twitter.com/lMFZzu9kd1

While Blumenthal made sure to insert into his tweet the “Islamist vs Christian” framing favored by the Assad regime, he made telling omissions. The tall building behind him that he mentions is the Zablatani Tower: in 2011, two years before the rebel faction Jaish al-Islam was formed, regime snipers shot unarmed protesters from its elevation.

By the time the regime forced Jobar’s surrender in 2018, it had damaged or destroyed most of the district and subjected it to 10 chlorine attacks. Jobar is part of Eastern Ghouta region, which in August 2013 was the target of the deadliest chemical attack since 1988 in Halabja, Iraq. More than 1,400 people were killed.

Some of this omission could have been attributed to ignorance. But as someone claiming expertise on Syria, Blumenthal can’t be unaware of the significance of his location. Geographical references in the image pinpoint his location to a balcony on the second floor of the building that houses the Qassaa Branch of the Bank of Syria.

That is 450 meters to the west of the Zablatani Tower. And just 220 metres to Blumenthal’s northwest is the Bab Touma branch of the feared Air Force Intelligence, identified in a comprehensive 2012 report by Human Rights Watch as one of the Assad regime’s main torture centers.

About 300 meters further in the same direction is the Al Khattib Branch of the General Intelligence, another notorious facility known for its medieval torture methods. According to the UN, more than 100,000 people have disappeared in Syria, many ending up in this torture archipelago.

The “Breathtaking View” of a Prison Where 1000s Executed

Accompanying Blumenthal on the junket was Rania Khalek, a Twitter personality who produces viral videos for the Russia Today subsidiary In the Now. With an image geotagged Saydnaya, Khalek invited her social media followers to admire the “Breathtaking View in Syria”.

This was about as seemly as inviting viewers to admire a stunning sunset over Auschwitz. Just outside the frame, but within Khalek’s field of view, is the Saydnaya Prison. According to a 2017 Amnesty International report, up to 13,000 civilians were executed there between 2011 and 2015.

Rania Khalek's "Breathtaking view in Syria" is only a couple of degrees away from the infamous Saydnaya prison, where tens of thousands of people have been tortured and executed.

Elsewhere Khalek posted a selfie from a joyride with Blumenthal and former-Russia Today producer Anya Parampil with the caption: “For the haters” (the regime minder who accompanies all foreign guests was not included in the frame).

If this were just a case of media vultures wangling freebies from a desperate and isolated regime, it would be easy to ignore. But this trip represents something bigger: the emergence of a new form of junket journalism that serves as a global laundering service for blood-splattered autocrats.

In recent months, several of the same figures have turned up in capitals from Caracas to Managua whitewashing mass repression; they have dismissed Uighur concentration camps in Xinjiang, slandered protesters in Hong Kong; and they all somehow find Vladimir Putin unimpeachable.

Indeed, Blumenthal’s political reversal started with a Kremlin-sponsored junket to Moscow in December 2015 – the same gathering where General Michael Flynn, Trump campaign advisor and later US National Security Advisor, may have been compromised and where US Green Party leader Jill Stein abased herself.

This is different than the pilgrimages that zealous ideologues used to make to the Soviet Union under Stalin, whitewashing the regime while it was unleashing terror and famine. They were blinded by ideology and believed in utopia.

The modern form of disaster tourist is a pure mercenary, bereft of conviction, indifferent to suffering, driven purely by avarice. They are acutely aware of the regimes’ repressive character and the odiousness of their role. Both Blumenthal and Khalek have in the past acknowledged the Assad regime’s criminality and, in the case of Blumenthal, denounced those who serve as its apologists. Their embrace of the same role shows self-aware intention. Their flimsy attempts at justifying the visit are telling.

On the trip Blumenthal and Khalek were joined by Yasemin Zahra, a representative of US Labor Against War; Paul Larudee, head of the pro-regime Syrian Solidarity Movement; Ajamu Baraka, Jill Stein’s running mate, and other pro-Assad conspiracy theorists. The cover story is participation in the “3rd International Trade Union Forum”. The focus is on relieving Syrian “workers” by removing Western sanctions and investigating evidence of US cruelty.

This strains credulity. The regime does not tolerate independent unions and the country’s only state-sanctioned union is controlled by the Baath Party. The forum was presided over by Assad, who only last week was hosting a Euro-fascist delegation. The gathering predictably lambasted the West but did not utter a word in support of Syrian workers disappeared in Assad’s gulag. No one spoke up for Idlib.

If the American delegation was truly interested in investigating US crimes, they could have visited Raqqa, where the anti-ISIS campaign was often indiscriminate and killed a large number of civilians. But that, of course, was not the motive.

If they cared about Syrian workers, they would not have sat so worshipfully at a forum presided over by the man the UN has accused of overseeing the “crime of extermination”. The women on the tour should have felt particularly queasy being regaled by a regime that, according to the UN, “used rape and other forms of sexual violence as part of a widespread and systematic attack against the civilian population of Syria”.

But this was not a trip about Syrians. It was about a murderous regime baiting vultures with the prospect of momentary significance. It was about feeding a personal void. It is about the lure of an industry that could be endlessly rewarding for those without convictions to defend or reputations to uphold. As long as tyrants are willing to shed the blood of innocents, launderers will remain in service, negating truth for personal profit.